Two of MLS’ first-year coaches are firmly in the running to take the prize of Coach of the Year after both enjoying exceptional seasons with their newly assembled squads. Caleb Porter, the former University of Akron coach came into Major League Soccer with practically no experience at the professional level other than taking the reins briefly in managing the US U23s for their 2012 Olympic qualification in which they failed miserably, going out in the group stages.

Mike Petke was the manager the front office didn’t really want. He’s young and had no previous head coaching experience. Petke was appointed mainly because of two factors: 1) he had spent a total of six years playing for the Red Bulls and formerly, the MetroStars and 2) It was reported that New York had failed in their pursuit of appointing former Swansea City manager Paulo Sousa or Gary McAllister, meaning time was running out and a coach needed to be quickly implemented. Essentially, Petke’s dedication to the club was what secured him the job.

In Oregon, the decision to bring Porter to Portland was his successes at College level. A 2010 NCAA championship alongside a host of other smaller awards, an attractive, possession-based style of football, reaching more wins at College level quicker than both Bruce Arena and Sigi Schmid did. This was alongside his reputation for producing many now familiar faces in MLS including the likes of Darlington Nagbe, Darren Mattocks, DeAndre Yedlin etc.

So, the question is simple. Who, after a year in charge, deserves to be announced the 2013 Coach of the Year? Petke or Porter? Let’s break this down. 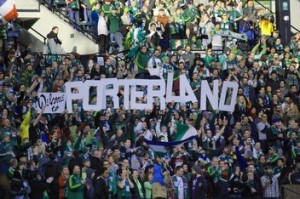 Considering Petke’s non-existent experience in being a head coach, it is hard to believe that at the end of the 2013 regular season New York Red Bulls would be winning the Supporter’s shield, the first piece of silverware New York have ever won, breaking the infamous ‘Curse of the Caricola’ and an automatic berth into the 2014 CONCACAF Champions League, ensuring Red Bulls fans will finally witness competitive International football at Red Bull Arena. No other team in MLS who were there since the inaugural season had never won a trophy in MLS – it took 16 years but Petke broke the curse.

Although Porter is yet to have any major honors attached to his name in MLS thus far he was able to achieve what looked to be the unachievable looking back at last season. Portland ended 2012 with an 8/9th place Western conference finish averaging 1 point per game- that was only better than Chivas and Toronto! This season, Portland topped the Western Conference standings with 1.68 PPG, the third highest in MLS overall and only five losses. The Timbers finished the regular season on an 8 game unbeaten streak. It is the first time in Portland’s three year MLS history that they have even qualified for the play-offs. If you want to talk about a turnaround, this is it.

Petke had an expensive squad who were under-performing with them constantly expected to produce some silverware, history was against them and New York needed to live up to it’s own brand. Porter had a squad in need of serious revamping, they would have settled for any playoff spot, but the fan-base needed appeasing after the recent failures and the ever-present desire to overthrow their rivals, Seattle. 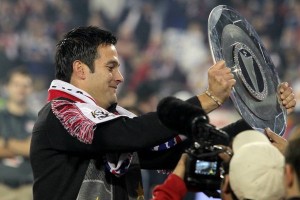 Portland were predominantly a 4-4-2 team under former head coach John Spencer with emphasis on the need for a big target-man (this was Kris Boyd) and a direct approach to playing. The play was tired and static, this unsurprisingly reflected in their results. Porter quickly made alterations to this, bringing in his highly successful formula from Akron, a fluid 4-3-3/4-2-3-1 system in which high-tempo, ball-retention were key to the achievements at Akron. At Portland, this system has been a resounding success with Argentine DP Diego Valeri being the key component as the number 10. Darlington Nagbe has flourished in his role, playing on either the left or the right wing. As stated in an article on NBCProSoccerTalk, Portland look to get the fullbacks to provide extra attacking outlets on the flanks while, at the same time, trying to overload the central channel with Rodney Wallace and Nagbe cutting inside to break through opposition defenses. 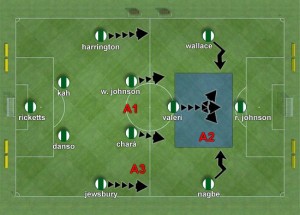 The issue at times and perhaps one of the reasons for such a large number of draws is how Portland can sometimes appear predictable and extremely narrow with there simply being too much congestion in central midfield. Porter may perhaps be looking for more wingers who can provide pure width next season. However, Portland can boast the best goal difference in the league and defensively, they rank second lowest in goals against – the high pressure seems to be working and other MLS coaches should take note. The one who ranked first was Sporting Kansas City, also notable for playing a similar system.

New York are a different hybrid. As stated in a previous article, the Red Bulls favor more defensive pragmatism than the aesthetically pleasing football that Portland aim to deliver, but with similar results. Petke began with a 4-2-3-1 in an attempt to occupy Juninho before reverting to a more simplistic 4-4-2 after opening the season with a record of 0-2-2. This means a lot more crosses. To avoid repeating previous points, Juninho was useless and was a key reason behind the switch. Issues which were pertinent throughout the regular season for Petke was finding a suitable striker partner for Henry. The Frenchman has been partnered with Espindola, Luyindola and most recently, Bradley Wright-Phillips this season before what looks to now be the strike partnership that will be relied on in the playoffs – Henry and Cahill.

Moving the ex-Everton Stalwart up front has meant the center midfield position alongside holding mid Dax McCarty needed occupying. This move looks to be a true master-stroke from Petke – converting Peguy Luyindula into a center mid. In the Supporter’s Shield clinching match v Chicago, Luyindula racked up three assists. The weekend before v Houston in what was his first game as a CM, The ex-PSG man got an assist there as well. He has looked a transformed player and Petke can take great pride for his responsibility in that.

There is little difficulty in attempting to pick out players who have thrived under Porter or Petke since their arrivals. For Porter the likes of Darlington Nagbe (nine goals, four assists), Diego Valeri (10 goals, 13 assists) and Will Johnson (nine goals and five assists, and he’s the anchorman!) have improved dramatically as footballers. Petke has names such as Cahill (11 goals, five assists), Olave (one of the best central defenders in MLS) and Henry (ten goals, nine assists) that he can look to who have shown themselves to perform to the expectation that is required of the three seasoned veterans. Having said this Porter and Petke have a player each who both have far surpassed what was required of them.

Rodney Wallace – The Costa Rican International was predominantly a left back before Porter arrived. Having seen his incredible pace and technical intelligence, the decision was made to switch Wallace into a left winger. The move turned out to be highly commendable as Wallace has recorded seven goals and six assists. Wallace has hit the net more times in 2013 than he has done in his four year career previously in professional football. He has also doubled his season record number of assists; three at D.C. United in 2009. Although consistency is perhaps an aspect of his game that needs working on, if that level of output is built upon – who knows how much better he could get?

Jonny Steele – A true journeyman in US soccer, Steele has spent the majority of his career in the lower tiers including stints in the USL, MISL and NASL before landing a spot at Real Salt Lake in 2012. After failing to impress there, Petke picked up Steele in 2013 after being days away from signing for a League 2 club. Steele has repaid the faith shown in him by Petke with five goals and six assists, a constant threat on New York’s left hand side while also willing to track back when required. He is a calm, balanced player but very dependable.

Petke and Porter are both responsible for lifting two players in the lower reaches of the salary bracket and fringes of MLS into highly productive, prominent first team fixtures. Both players are prime examples of the strength of both Petke and Porter’s man management skills. 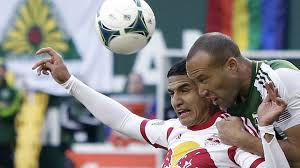 Just so you know, Portland and New York only met once this season. That was at JELD-WEN Field in the first game of the season. It was 3-3.

Petke and Porter’s achievements are virtually inseparable. The MLS first-year coaches were relatively unknown quantities entering the 2013 season. It is a solid argument that Petke had entered 2013 with a squad which was predominantly inherited from Hans Backe the year before, filled with star studded individuals who could turn an average team into a good one with little direction needed. The capability of Porter’s squad when he arrived was limited yet he managed, through astute signings and strong leadership, to compile a team and get them to play an attractive brand of playing. New York fans can accept that at some points in their season their pragmatism turned into a scrapfest. Portland lost less games than New York did (five to nine) and went from 8th place to 1st in a year instead of NY’s rise from 3rd to 1st. Portland were more pleasing to watch and had a greater turnaround.

On a personal level Petke has a lot to be proud of, leading the team he loves to a Supporters’ Shield with history on his back when having no head coaching experience previously. Porter offers entertainment and a young team who look to be on an upward trajectory, he had the fans on his back.

Petke and Porter have placed themselves firmly into MLS’ evolving history and will undoubtedly continue to put their stamp on the league. When looking at just the regular season of 2013 though, Porter looks to have edged it to become coach of the year.

One thought on “MLS Coach of the Year – Porter or Petke?”