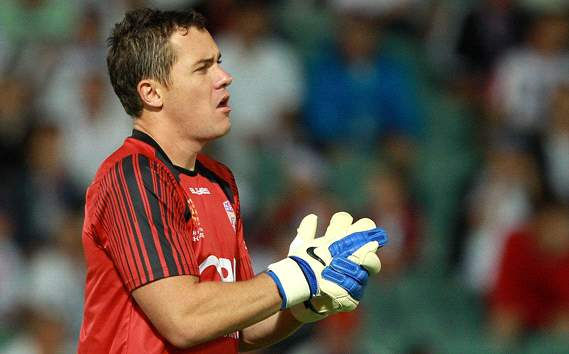 Well isn’t it a wonderful thing when a goalkeeper gets a much deserved man of the match award! That is what greeted Danny Vukovic on Friday night after his Perth Glory side made the long and familiar trek across the Nullarbor to Newcastle to take on the Newcastle Jets. Vukovic has played every minute of every Glory game this season and their form has been in stark contrast to their successful 2011-12 campaign. His sharp save from a short-range bullet strike from Adam Taggart was a contender for goal of the year and without his service at the back, the three points could have stayed in the Hunter. For now the Glory look back on track with a rare away win and if they finish the season off with three more wins and other results going their way, anything can happen in the final series.

On Saturday night I was lucky enough to be in the crowd for the Brisbane Roar v Melbourne Victory game from Suncorp Stadium. The first half was not without its chances for both sides, but it was the Victory who took the lead on the back of a wonderful header by Leigh Broxham despite Michael Theo’s acrobatic effort.  The Roar held the ball like a grandma holds a newborn and totally dominated in all stats for the match except for the scoreboard. To the Victory’s credit they hung in all match and an outstanding diving save from Nathan Coe denied Ben Halloran with the match winner. All in all it was high quality gripping football that gave the 12, 624 fans that flipped a coin on the dodgy weather around town, their money’s worth.

The Central Coast Mariners’ recent form slump continued after going down to a far more committed Sydney FC side at Allianz. Sydney is a vastly improved defensive unit from earlier in the season and has crept up to fifth spot on the ladder narrowly ahead of the Jets on goal difference. A big hats off to Vedran Janjetovic who notched up his third clean sheet for the season and must be a happy little vegemite with the back four starting to gel and tighten things up. Although the Mariners went down, Matt Ryan pulled off another fine angled save from the classy Alessandro Del Piero.

The Western Sydney Wanderers continued their march towards claiming the Premier’s Plate in the club’s inaugural year with a classy win at home against last placed Wellington Phoenix. Another bumper crowd turned up managing to top their NRL cousins Parramatta Eel’s figure which must please the bosses at the FFA no end.  The real positive is both codes are able to attract healthy crowds against out of town competition, despite the scheduling clashes. The Phoenix continue to improve under interim coach Chris Greenacre, but to be a competitive force next season they must address their appalling away record with only one win this season.

Tonight the Melbourne Heart host Adelaide United at AAMI Park in what is a must win one game for the Heart.  They have a tough run home with games against Western Sydney (at home) then a tough road trip that includes Brisbane and Central Coast. For the Heart it has been an up and down year with a host of inconsistent performances and only once recording two wins in succession. Andrew Redmayne will be looking to secure his third clean sheet in a season where he gained promotion to the starting side. Eugene Galekovic’s Adelaide will also be aiming to stop the recent rot that has plagued his team and bounce back to some form and cement a top four spot.

To the EPL and tipping this week proved harder to pick than a broken nose! The football filled week was dominated by a visit to Old Trafford by Real Madrid and ensuing discussion/debate on blogs everywhere over the Nani red card decision. Whatever your opinion, you have to say his exclusion from the game led to the wind escaping from United’s Champions League title hopes. With United all but cruising to the EPL title the focus has firmly shifted to the battle to defy relegation.  Aston Villa’s comeback against Reading was spirited after a wobbly start when Nathan Baker decided he wanted to be on the goal sheet and slotted one past a dejected Brad Guzan.

In a round interrupted by the odd FA Cup tie, only two clean sheets were recorded. Surprisingly both occurred the Norwich/Southampton game about exciting as watching live footage of the Papal conclave vote from the Vatican. (But whatever floats your boat?). The keeping highlight came for Southampton’s Artur Boruc when he stopped a Grant Holt’s dubious spot kick.  Equally Mark Bunn put in a solid showing for Norwich in the fluky and wet conditions at Carrow Road.

Joe Hart (Manchester City) still sits alone atop the clean sheet stat sheet on 13 with his nearest rival Petr Cech (Chelsea) back on 10 and a group including in form Pepe Reina (Liverpool), Simon Mignolet (Sunderland) and Asmir Begovic (Stoke City) all sitting on nine.

I will leave you this week with some utterly useless but interesting numbers. So far this season 807 goals have been scored in the EPL and an amazing 7239 shots faced by the 38 goalkeepers lucky enough to have made it out onto the pitch. This week will see some Champions League return leg games to decide the final eight. The biggest game of the week though will see Aston Villa at home to QPR. Toss a coin on this one, although the home ground fans may just help get Villa across the line for the three crucial points.

Winning doesn’t really matter as long as you win.

A rare moment of clarity for Vinnie….classic