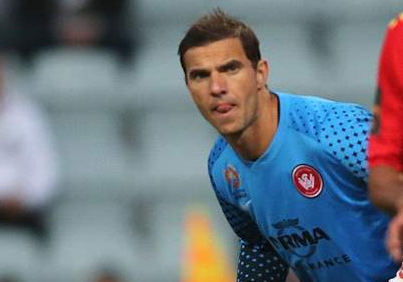 It was a big week in the A-League with plenty of key games with the finals series fast approaching.  The weekend started with a dour match at Hunter Stadium between the Jets and the Brisbane Roar. Both teams had plenty to play for as a battle for a top six position looms with only five rounds remaining. Keepers Michael Theo and Mark Birighitti would have been satisfied for their individual performances after both keeping clean sheets.

As for their managers, the disappointment of missing out on three vital competition points would have been a bitter pill to swallow. Both sides had chances but the appalling conditions didn’t make for easy goal keeping or for the strikers trying to find their range. Michael Theo saved a fine shot from attacking midfielder Ruben Zadkovich and the Jets Mark Birighitti timed his slide perfectly to deny Besart Berisha from finding the net after a sweetly timed run through the middle.

To Parramatta Stadium on Saturday nigh and the conditions certainly didn’t improve for Perth’s journey back to the east coast.  The Wanderers again proved that they are serious Premier’s Plate and Grand Final contenders with a narrow win against a Glory side displaying plenty of promise and improvement under new coach Alastair Edwards. Danny Vukovic was unlikely to keep a clean sheet after a goal from Aaron Mooy came after an unfortunate deflection. The Glory’s new found enthusiasm and teamwork could certainly decide the fate of a few sides with aspirations of a finals appearance.

Central Coast returned home to Gosford after an away loss to Perth last weekend and duly notched up a handy six-goal haul over the Melbourne Victory. Michael McGlinchey bagged an impressive hat trick and young striker Mitchell Duke chipped into the goal fest by snaring a brace. Central Coast didn’t have it all their own way though, as the score was only 3-2 in favour of the Mariners at the 80th minute mark. It was a horror night for Victory keeper Nathan Coe’s stats sheet after conceding six goals and three in the last ten minutes that will see the defensive coaching staff looking to strengthen things quickly. For the Victory it was their third loss on the trot and will be looking to make amends this week as they host the Newcastle Jets at AAMI Park on Sunday.

Wellington Phoenix hosted Adelaide at the ‘cake-tin ’in what was an entertaining game. The Phoenix’s second half effort was probably their best all year, but their conversion rate from 23 chances in the match displayed their lack finish prowess on the back of promising passages of play.  On the keeping front, Eugene Galekovic’s night was a double-edged sword from the howler he added to the highlight reel to the many great saves recorded. A mistimed back pass from Antony Golec brought about a situation where no keeper likes to be.  Do you back yourself against a striker or err on the side of caution and clear the ball as far as you can into the abyss that is your opponents half. To his credit he took the error on the chin, moved on quickly and finishing the game with no signs of post howler stress disorder. So much so two of his second half efforts helped salvage his team a vital point. His manager Michael Valkanis heaped plenty of praise in his number one, stating that he was outstanding throughout the clash but to expect him to be perfect for the whole campaign is unrealistic. Certainly the words you love to hear from your boss in one of the toughest positions in football.

And finally, Melbourne Heart took on Sydney FC after they learnt earlier in the week that Allesandro Del Piero will be staying on for a further year. The news is a boost for the A-League after Lucas Neill also agreed to terms albeit to the displeasure of Melbourne Heart who were in the race for his signature. It is always tough to watch a leader of the national team being the subject of boos and jeers by opposition supporters, but it certainly showed the passion they had for him in joining the Heart this season. Heart eventually had the last laugh by running out winners 3-1 and secured their fifth home win in succession.  They now prepare to travel across the ditch to meet Wellington in what could define the Heart’s season with a fairly tough draw in the run home to the finals.

The race for the inaugural ‘Clean Sheet’ prize has gotten tighter than an old pair of jeans, with Western Sydney Wanderers evergreen keeper Ante Covic grabbing another to take his season tally to eight and is within one of the Mariners’ Mat Ryan. It could be a tough gig for the judges if it comes down to a tie, as I’m not sure either keeper would be keen on sharing the prize. Perhaps a count back awarding the prize to the keeper who conceded the fewest goals at seasons end will be fair. At this stage Mat Ryan is on 17 and Covic on 18. Goals conceded seems to be a good measure to how a team is performing on the ladder.

Well it was a full week of A-League but next week I will be back with a detailed look at all the EPL goalkeeping goings on!

I’ve just watched the replay and there is absolutely no doubt: it’s inconclusive.