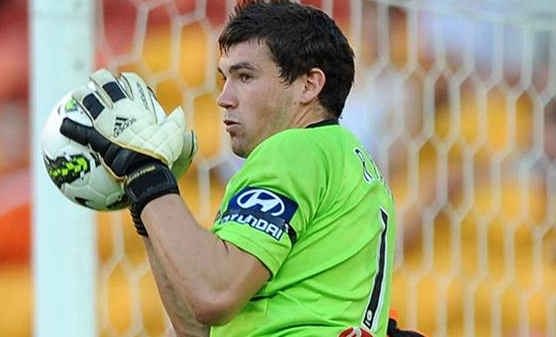 Welcome back to ‘Clean Sheet’, an inside look at the greatest position in world football… “Goalkeeper”.

The great news this week is the Socceroos selection of some great A-League rising talent for the upcoming EAFF East Asian Cup tournament in Hong Kong commencing on December 1. The Socceroos will play four games in seven days, giving plenty of opportunities for many to impress Holger Osieck ahead of the remaining World Cup qualifiers in 2013.

The big news for Clean Sheet readers is finally seeing Mat Ryan get his first senior cap for his country. Mark Schwarzer’s service to the Socceroos can never be questioned, but it is tournaments such as these that are an important part of the succession plan facing Australian football.  There is no shortage to Australia’s keeping stocks both here and abroad, but it is the high stakes international qualifying clashes that are the real test of any player wanting to cement a place in the Socceroos inner sanctum. I may be biased in my writing but when watching the many Socceroos, Matildas and Joeys games you can easily see what it means to play for their country. The pride in the shirt has never been more respected, and as fans we should try and remain positive about the international football landscape in this country. There will always be ups and downs for national teams (just look at England) and coaching strategies and direction come under constant criticism, but it is the grassroots and the countless youth leagues that need ongoing care and attention to maintain and feed the current squads at the top.

Well what a giant feast of ‘Clean Sheet’ action in the EPL over the weekend just passed. Unfortunately for the goalkeeping minority, the A-League only plated up one small calorie controlled sized serving of keeping clean sheet prowess. The lucky diner happened to be the Victory’s Nathan Coe who managed to keep the leather /synthetic /polyester / latex composite sphere from reaching the net. Coe’s performance was solid as he recorded his first clean sheet of the season. His well timed save from a Mark Bridge header was made all the more impressive after Victory were forced to play the majority of the match without key defender Sam Gallagher. It is obvious that strengthening the defensive structure at the Victory was given a high priority after leaking five goals in their poor showing in week two against the Roar. The Victory have now crept up the ladder into equal third place are unbeaten from their last four outings.

Adelaide and Central Coast continue to be the benchmark of the competition and you have to think that finally breaking the 14 match Gosford Brisbane Roar hoodoo they are serious contenders for the title. According to Rado Vidosic his team resembles more of a kindergarten outfit than a team that has won back to back titles. In these times where the playing group hold the slim balance of power in the shed, harsh criticisms by the manager can sometime prove to backfire on team harmony. Only time will tell. Until then let’s see if Rado’s  team bounces back at home this week against the Newcastle Jets.

My thanks go out to the glove men in the EPL this week after eight keeper’s recorded clean sheets for their respective clubs.  Despite playing only five premiership games this season for Swansea, Gerhard Tremmel earned my keeper of the week for his determined display to keep the Liverpool side scoreless and continue the frustrating fortunes for their manager Brendan Rodgers. The German born Tremmel is making the most of his chance to replace injured starting keeper Michel Vorm. And he is certainly one to watch over the next month as they seek to put a Capital One Cup into the trophy cabinet at the Liberty Stadium.

Stoke City’s Asmir Begovic has hit the lead in the EPL Clean Sheet table after recording his sixth clean sheet of the year. Sadly Stoke have recorded only three wins and seven draws this season but you’d have to think that without Begovic at the back things could be much worse for the Potters. As the northern winter weather starts to engulf much of England over the coming months, start to keep your eyes on the adjustments the top keepers make to their game. As the pitches start to get greasy and muddy the six yard box begins to resemble more of a mine field making the job of keeping clean sheets nigh on impossible. Strikers will also look to attack the surface differently by trying to keep balls lower and look to bounce the ball in front of the keeper.

I thought since the ‘Baggies’ (West Bromwich Albion) are travelling so well in the EPL after 13 rounds, we would put their keeper Ben Foster under the microscope this week to see if his stats measure up.  Since Foster joined the Baggies on loan from Birmingham City back in mid 2011, he looked to put his bad run of injuries and form behind him to compete in 37 of their 38 league games. All this while grabbing a club record equalling 10 clean sheets whilst going on to help the club gain its highest league position in 30 years. Last season he was voted the club’s ‘Player’s Player Award’ and has since put pen to a long term deal to keep him at West Brom for a further three years. This week his side takes on Swansea at the Liberty Stadium so tune in and watch two of the league’s form keepers in what promises to be a tough game to pick the result.

That brings me to the ‘Keeping Clanger’ of the week.  It unanimously goes to poor old Ali Al Habsi from Wigan Athletic, who probably wishes that the goals had turned into a Deep Space Nine ‘Black Hole’ after fumbling a deflected shot from Robson-Kanu. Sadly for the mostly dependable Al Habsi, the blunder will forever become part of endless YouTube compilation packages.  I preferred the very kind spin that Sky Sports web writers put on the fiasco.

Robson-Kanu’s shot spun high up into the air off a Wigan defender but Al Habsi seemed in control as the ball dropped back down. However, a combination of the spin and the wet ball contributed to it slipping through the keeper’s grasp and then hitting the bar before going in off the Oman international.

Doesn’t sound so bad does it?  To date his season in the box has been very positive with a couple of clean sheets to his name and some very fine saves. Let’s hope this blip on the radar doesn’t send his confidence plummeting into the “Bermuda Triangle” of goalkeepers.

Which goalkeeper has the longest clean sheet record of all time in soccer?

The first person to follow me on Twitter and tweet the correct answer will earn a popular mention in next week’s column along with the answer!

Goalkeeper quote of the week:

Some goalkeepers are really sexy with their feet. I have a little sexiness with my feet, but I don’t like to bring it out.

One thought on “Clean Sheet – Domestic boost with Socceroos selections”