For a club like Guingamp, who are one of the more smaller clubs you’ll see in the major leagues in Europe, money isn’t something that’s readily available to use for transfers.

Hell, for any club in Ligue 1 not named PSG and to a lesser extent Monaco, finding talent not within your youth academy is an arduous task. It can involve taking chances on players that didn’t make for bigger clubs in Ligue 1 or buying talent in Ligue 2.

One of the more publicised moves last summer of this nature was West Ham signing Diafra Sakho from at the time Ligue 2 side Metz, who was the best striker in the division last season.

The Hammers took a chance on a Ligue 2 talent and hoped his statistical production with Metz would have some carryon effect to West Ham, which it did as he performed great for West Ham in the first half of the season.

Claudio Beauvue isn’t quite in the same boat as Sakho seeing as Beauvue is completing his third season in Ligue 1, but his rise this season is eerily to what Sakho experienced with West Ham.

Unlike Sakho, Beauvue didn’t have a standout season either in his previous two seasons in Ligue 1 or his seasons in lower divisions in France.

His highest goal output in a single season was 11 in 2009-2010 for Troyes in the third division as a 21-year-old. Until this season he’s only hit double figures in goals one other time, in 2011-12 with Chateauroux in Ligue 2.

But out of nowhere, Beauvue has become a goal scoring machine for Guingamp this season and has propelled the club to tenth in Ligue 1 currently, which if it stands would be the best season Guingamp has had since their seventh place showing in 2002-03.

Eighteen goals in all competitions, 15 in Ligue 1. He has been the talisman for Guingamp’s surprise season. Guingamp were the only Ligue 1 club to make it into the knockout stage of the Europa League, and Beauvue’s five goals in the tournament were crucial to the Brittany side but his form in domestic play has been even more sparkling.

Claudio Beavue’s 15 goals in league play ranks him fourth in Ligue 1 scoring behind  Zlatan Ibrahimovic, Andre-Pierre Gignac and Alexandre Lacazette, this after only combining for six goals in his previous two seasons in Ligue 1.

He’s not a striker who lives on pure pace, but he’s quick, can run through the channels when given the opportunity and he’s a great leaper for headers whether in open play or dead ball situations.

Only Gignac with 7 headed goals can outdo the five goals Beavue has scored on headers this season. The header he scored versus Lille earlier in the season was one of the better  ones you’ll see in Ligue 1 this season:

It wasn’t the easiest of starts for both Beauvue and the club. Guingamp were dead last in Ligue 1 after 15 games and Beauvue only had three goals in league play.

Some of that was due to manager Jocelyn Gourvennec playing Beauvue in a myriad of formations but never playing him as a forward. He’s played as a winger in a 4-2-3-1, a wide man in a 4-5-1. He even played as a central attacking midfielder in a 4-2-2-2 formation.

Whether by coincidence or Gourvennec found something he liked, he played Christophe Mandanne and Beauvue together as a front pairing versus Caen on December 3rd and Guingamp haven’t looked back since.

Beauvue scored two goals and had an assist while Mandanne had two goals as well. Since that game Beauvue has played the majority of his time as either a front line striker or partnering up with Mandanne, scoring 12 of his 15 league goals following the change in deployment.

The club itself has seen a turn of good fortunes as they have taken the sixth most points in Ligue 1 over the last 20 game span.

The dependency to which Guingamp’s attack has gone through Beauvue and Mandanne is reflected when looking at their contribution to the amount of shots that Guingamp take.

I created a chart that shows the % that a player contributes to a teams’ shot total using shots per 90 and key passes per 90. The idea came from this Statsbomb piece published on usage rates. 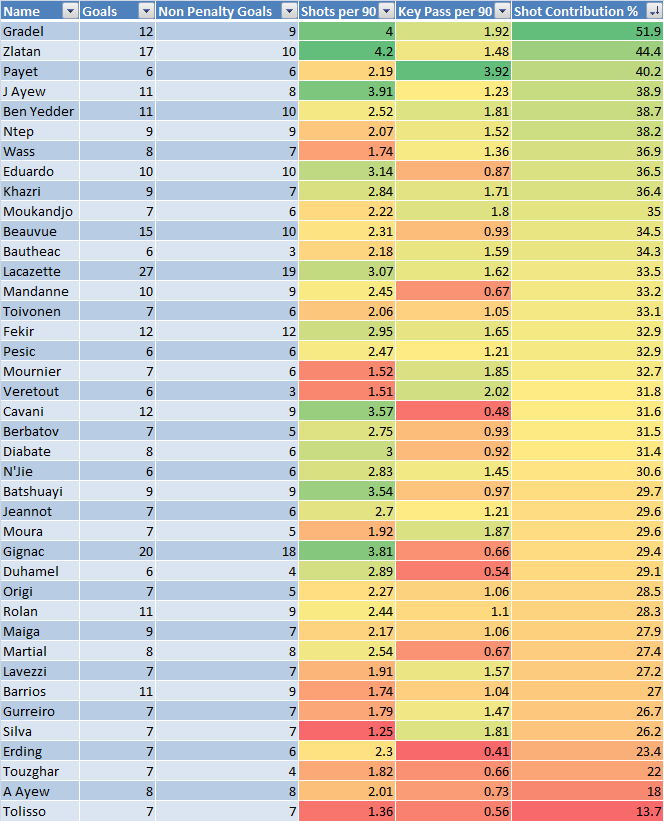 Gradel is tops in this department by a fair margin, something mentioned previously when it came to Saint Etienne’s attack.

With how much Guingamp, a low shot producing team (they are tied for third last in shots per game) has relied on Beauvue and Mandanne, it makes you wonder why Gourvennec didn’t make the switch earlier with the success it’s generated.

However one would suspect Gourvennec didn’t envision how Beauvue would take his games to new heights by simply just moving him up as a forward, a position he rarely played last season.

Beauvue only had two appearances last season as a forward, while the majority of his playing time was as a midfielders hugging the touchline.

All of that brings into question how much of Beauvue’s season has come down to luck and how much has been just Beauvue revelling at the opportunity to be a front line forward.

I used expected goals to obtain some form of answer to this. The model I’m working on simply takes into account average conversion rates in different zones when it comes to the body part and creates a tally overall.

For reference here’s a diagram for the conversion rates used for this: 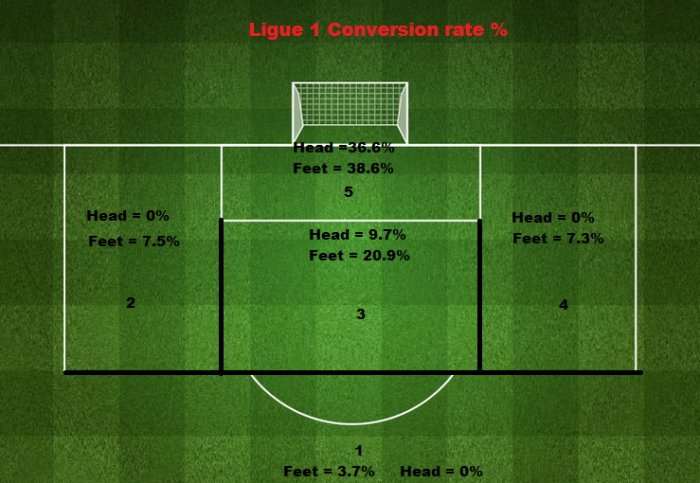 And here’s the shot profile for Claudio Beauvue’s current season using those conversions: 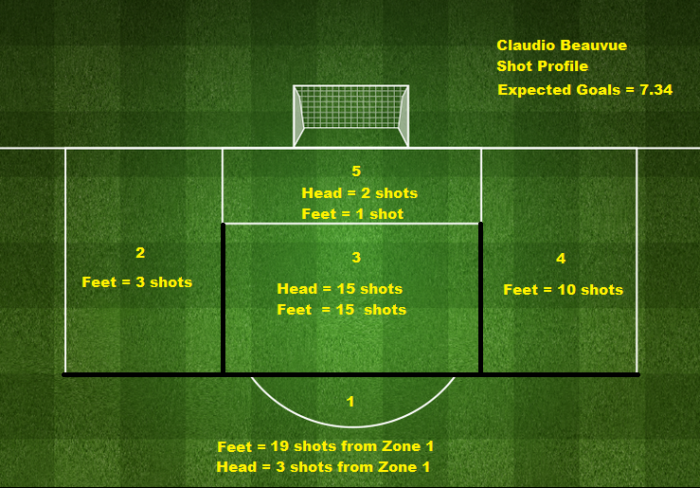 The model generated an output of 7.34 goals compared to the 15 goals he’s scored this season. However that’s somewhat misleading as five of Beauvue’s 15 Ligue 1 goals were from penalties and penalty shots are excluded from the model.

So while there’s some hints of variance to Beauvue’s season (namely the amount of goals coming from penalties), his open play work suggests that his production this season has a fair amount of skill to it provided that he’s played as a forward.

It’s been a great season for both Claudio Beauvue and Guingamp but this will be the end of the two’s partnership.

Beauvue has announced that he’s leaving the Brittany club at the end of the season and has hinted that the English Premier League could be his next stop, with Everton and West Ham showing interest in the Frenchman.

Provided that Beauvue is allowed to play as a forward, we could be seeing the emergence of a consistent double figure goal scorer for the next handful of seasons.

He’ll have to improve on generating more shots individually but that could be aided by playing in the EPL which shoots more on average 1.5 more times per game than Ligue 1 (12.9 to 11.4).

The rise of Claudio Beauvue as a legitimate frontline forward has been one of the great hidden stories in Ligue 1 this season and although Guingamp won’t have the Frenchman to lead their line come next season, they can take solace in being the club that propelled Beauvue into a goal scoring forward.