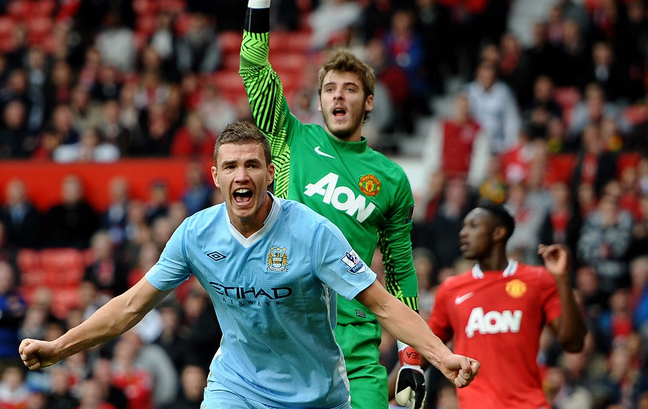 Ahead of tonight’s Manchester Derby, Andrew Bexpert has some facts about games between the two clubs.

There have been just four goals scored in the last five league meetings between the clubs at City, with just one goal scored in the second half, an injury time winner from Paul Scholes in April of 2010. In terms of goal totals, the clubs have contrasting styles playing home and away in 2011/2012 with City home matches this season seeing at least three goals in 14 of 17 (82%) played with eight matches (47%) seeing at least four goals. On the other hand, only five (29%) of United’s away matches have seen a minimum of four goals, just above the league average.

The match will be just the third time in six Premier League seasons that a second placed club will host a visiting club in first place. The last occasion was City’s 6-1 win over United early this season while the two previous were both Chelsea hosting United, a 2-1 win for Chelsea in 2007/2008 and a scoreless draw in 2006/2007.

On only three occasions (18%) this season has the first half of a City home match seen more goals than the 2nd half compared to seven occasions (41%) of United’s away matches. The league average in 2011/2012 has been 29% with the five season average at 28%. Further, City have scored in the 2nd half of each of their home matches this season, while United have conceded in the 1st half of just three of their 17 away matches in 2011/2012.

City have collected an average of just over 20 shots per game at home, third best in the league in 2011/2012, with 36% of their home shots landing on target compared to 31% when playing away. Meanwhile United have delivered just under 13 shots per away game this campaign with 41% landing on target, a higher rate than their 37% when playing at home.

Over the last five Premier League seasons, City have hosted a match against a 1st placed club on just three occasions. Each of those three matches were against Chelsea with City winning twice. Meanwhile United have played away to a 2nd placed club four times over the last five seasons, winning once, a 3-1 result at Spurs in 2009/2010 while losing three times, at Liverpool in 2008/2009 and at both Chelsea and Manchester City in 2007/2008.

BettingExpert.com blog manager. If you're looking for sports betting analysis and insight, visit the BettingExpert Blog. I'll give you a perspective you probably hadn't considered.