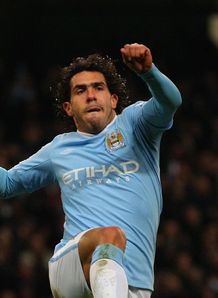 The semi finals of the Carling Cup got a little bit more interesting last night when Manchester rivals City and United were drawn to face each other for a place at Wembley.

City overcame a young Arsenal side comfortably in their quarter final while holders United defeated Tottenham, whom they beat in last year’s showpiece, 2-0 on Tuesday.

Second half goals from Carlos Tevez, Shaun Wright-Phillips and youngster Vladimir Weiss lit up the City of Manchester Stadium and guided the club to its first major semi final since the FA Cup in 1981.

Manager Mark Hughes said he was looking forward to facing his former club in such a big game.

“I think the United draw was meant to be,” he told the club’s official website.

“I don’t know whether Fergie will stick with the kids, they have some very good ones. They defeated a near full strength Tottenham side but we know we can compete with them.”

In last night’s other game, league leaders Chelsea were dumped out of the competition by Blackburn Rovers after a penalty shootout.

The game finished 3-3 after extra time and Paul Robinson was the hero for Rovers, saving spot kicks from Michael Ballack and Gael Kakuta.

The Ewood Park club will face Aston Villa in the semi final after Martin O’Neill’s men defeated Portsmouth 4-2 on Tuesday.

The ties will take place over two legs in the weeks commencing January 4 and 18.