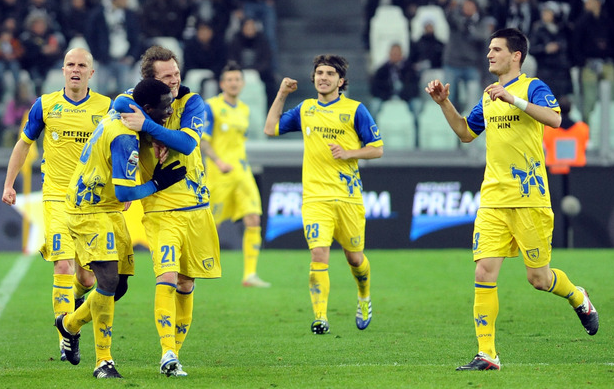 A late goal by Boukary Dramé on Saturday night secured Chievo a memorable 1-1 draw against Juventus, following an effective performance from the Flying Donkeys. The point gained means they’re lifted into the top half of the table, and coach Domenico Di Carlo has said that Chievo “want to have a campaign that can give us something more than just achieving safety from relegation.”

Unlike their fierce cross-town rivals and fellow Stadio Marc’Antonio Bentegodi dwellers Hellas Verona, who have a Serie A title to their name, Chievo have never come anywhere close to winning the Scudetto. But, also unlike Hellas, Chievo have managed to achieve Serie A survival season after season, and bounced straight back after their last relegation in 2007.

Now, under the leadership of Di Carlo – who’s in his second spell at Chievo after being sacked by relegated Sampdoria last season, they’re reaping the rewards of the stability they’ve sown through the years. The Gialloblu are based in a tiny suburb of Verona with just 4,500 inhabitants – you could fit the population of Chievo into the Stadio Marc’Antonio Bentegodi almost ten times – so their ability to constantly perform in the top flight is thoroughly impressive.

They’re notoriously a difficult team to beat, and are, in some respects, Serie A’s answer to Stoke City. They average 68 long balls per game, the 6th most in the league, and only Bologna average fewer short passes per game than Chievo’s miserly 307.

Juventus unsurprisingly dominated possession in the 1-1 draw – 61% to Chievo’s 39%, but did they deserve to win the game? Probably not. Di Carlo’s side were without their captain and talisman Sergio Pellissier, who has recently scored his 100th goal for the club. Nevertheless, Alberto Paloschi worked hard up front, and the Milan loanee proved a more than capable stand-in.

Despite seeing relatively little of the ball, Chievo only managed one fewer shot on target than the Bianconeri, and always seemed dangerous on the counter. They lined up in a 4-3-2-1 shape, with five players in the centre of the pitch compared to Juve’s two. The hard work from the forwards meant that they kept Andrea Pirlo quiet, and they were very compact defensively.

In fact, the single goal they conceded was unfortunate, with Stefano Sorrentino unable to keep out a Paolo De Ceglie header following a rebounded Pirlo free kick. Sorrentino has never been capped by Italy, although like Parma’s Antonio Mirante, he’s made his name as a very capable goalkeeper, and was superb on the night.

American Michael Bradley had a great game – and has had an excellent start to life in Italy, breaking up play and instigating attacks from deep in the midfield, with full backs Nicolas Frey and goalscorer Boukary Dramé pushing forward. The latter in particular gave Stephan Lichtsteiner a lot to think about, and helped keep the Swiss international who’s had such a superb start to life in Turin quiet.

It was a typically Chievo-esque performance from the Gialloblu – but that’s no bad thing. They’ve constantly punched above their weight in Serie A, and they’ll no doubt be looking for a top half finish this season. It’s certainly not bad for a provincial side who’d never seen top division football before the turn of the millennium.