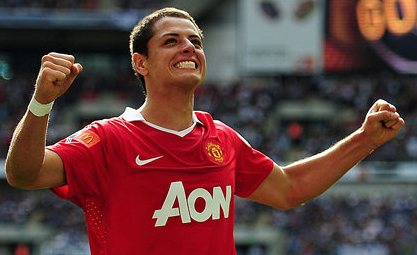 When Javier Hernandez first descended upon Old Trafford last July after a successful World Cup with Mexico, not much was suspected of the young hitman. In fact, he was largely seen as just a back-up for Dimitar Berbatov and Wayne Rooney.

But as the season progressed and Berbatov’s form melted faster than a 99 in the blistering summer heat, Sir Alex decided to give Mr Hernandez, his eager 21 year old, a taste of Premier League football and from that moment on he never looked back.

Despite featuring mainly as a sub up to October, fans were already relishing the prospect of him partnering fellow hitman Wayne Rooney in a ‘relationship made in heaven’. It took time for this relationship to blossom but when Sir Alex finally began to give Chicharito a run of games, he took chance after chance after chance. At one point, he even boasted 10 Premier League goals from just 14 shots on target.

February rolled around and after scoring consistently from cameos off the bench, Sir Alex decided to hand the Mexican a rare start in the match against Wigan at the end of the month as a reward, and trust me it had been a long time coming. The resulting performance from the ‘Little Pea’ signalled the beginning of the end for Berbatov and his United career as Javier netted twice and grabbed a Man of the Match award as United ran out comfortable winners 4-0. Lord Ferg then decided in favour of Chicharito for their next game as they travelled to Stamford Bridge to lock horns with Chelsea.

However, Hernandez was foiled by a resilient Chelsea defence and was subsequently chosen on the bench for the next game at Anfield. Berbatov moaned and slouched his way across the pitch throughout the game and so when Hernandez was introduced at half-time, it would’ve seemed that his positive influence would be able to breed new life into the United side continuing their awful run on the road this season. Hernandez went on to score in injury-time but the match itself ended 3-1. Hernandez was then regiven his first eleven place vs Arsenal next weekend, and again for United Champions League match vs Marseille at Old Trafford. Much to Berbatov’s dismay, the Little Pea bagged a brace along with yet another MOTM award.

Since the beginning of February, Berbatov has only managed a mere two goals. Only two bloody goals. Javier Hernandez on the other hand has mustered 9 in 17 games. The thing about Berbatov was that although he has scored 22 goals this season, a large portion of them came in games where he scored 5, 3, 3, and 2. So if you take them away we have a total of 9 goals scored in 35 appearances. That’s averaging just under a goal every 4 games. He’s dangerously inconsistent. So inconsistent there are already reports linking him elsewhere due to Hernandez’s prolific record.

What Hernandez has done since arriving is nothing short of remarkable. Scoring 20 goals in your debut season is a tough enough assignment but for a team with the calibre of Manchester United? Wow. In fact, the last United player to score twenty goals in his debut season was none other than Ruud Van Nistelrooy himself. And what a revelation he turned out to be, eh?

United fans can already smell the desperation that reeks from Berbatov’s dressing room and unless he can pick up some consistency, he can call it quits on his United career. “Moan all you want, it wont change my mind” was a phrase my mum used to coin every now and again when I was a kid and I figure it fits the bill perfectly for the Bulgarian’s scenario.

One thought on “Chicharito – The Revelation to United’s Season”