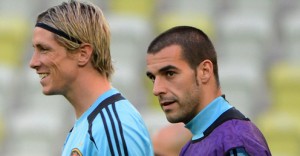 If only we could rewind to the summer and Alvaro Negredo had signed for Chelsea. The Spaniard could have been the solution to Chelsea’s long standing striking problems.

Ever since Didier Drogba left Chelsea after winning the Champions League in 2012, the West London team have been searching for a replacement, as Torres does not seem like the long term solution for Chelsea.

I am a firm believer that Lukaku was right to move to Everton as he is not ready to be Chelsea’s main man. At the tender age of 20, Lukaku is already showing the promise of a great striker, but like with any job you need to work your way up. After impressing at West Bromwich Albion, the Belgium striker is taking the natural steps to becoming world class by joining Champions League chasing Everton.

However, in the case of Negredo you have a ready-made goal scorer capable of performing at all levels.

Negredo joined Manchester City for a reported £20 million transfer fee in the summer and the former Sevilla man seems to have it all, scoring goals with both feet, shots from inside and outside the box, with his head and even scoring free kicks as he did earlier in the season with a beautiful curling effort against Swansea. His goal scoring threat is not even limited to the Premier league, where he has scored nine goals, as Negredo has scored three goals in the FA Cup, two in the Capital One Cup, and five in the Champions League.

Negredo seems far more like a £50 million player than Fernando Torres. Negredo’s 21 goals so far this season outweighs all of Chelsea’s strikers combined as Torres, Eto’o, and Ba have only mustered up 16 goals between themselves in all competitions. It may have been a totally different story this season if the Spaniard was rattling in the goals for the blue of Chelsea instead of Manchester City.

One can only imagine the damage Negredo could have done leading an attacking force with the likes of Oscar, Hazard, Willan, Mata and Schurrle supporting him. The man from Madrid is surely giving Spanish coach, Vicente Del Bosque, a major selection headache ahead of the World Cup while adding the woes of Torres. It seems like a race between him and Diego Costa for Spain’s number one striking role, if they decide to play one at all.

Mourinho might have been better off pursuing Negredo over his summer long quest for Wayne Rooney. And it does not look likely that Chelsea will be adding a striker in this January transfer window as they have just re-signed the Nemanja Matic for £21 million.

It seems like Manchester City will continue rattling in the goals this season with their prolific strike force of Negredo, Aguero, and Dzeko while a classic Mourinho Chelsea seem more concerned keeping clean sheets, especially considering their recent purchase of a defensive midfielder over a much needed striker.

I am 22 years old. American/ Swedish. A recent graduate in History of Art and Gallery and Museum Studies From the University of East Anglia and am currently working at the National Football Museum in Manchester.