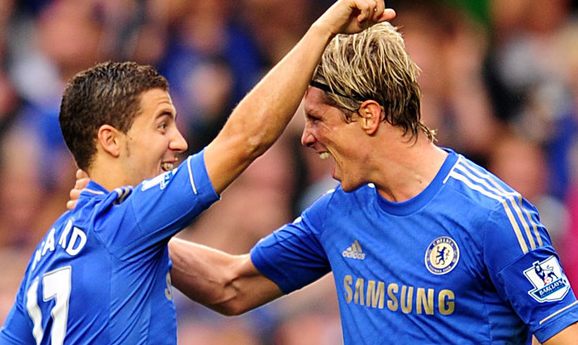 After their cup double last season, Chelsea has begun this season’s Premier League with a strong start. Withseven league wins and only one draw and the one defeat suffered to Manchester United, the Blues have spent seven rounds in first position. The last time Chelsea began the season with such an impressive start was 2010-11. Coming off a domestic double winning season, Carlo Ancelotti’s team only lost one match and drew one match  in their first ten league matches.

But then everything fell apart, after 14 rounds in first position Chelsea slipped down to fifth place before they managed to regain some sense of direction and finish the season in second. By analysing the mistakes of the 2010-11 season it can be seen how Chelsea under Roberto Di Matteo can avoid making similar mistakes.

Even before his team began falling down the league ladder Carletto’s tactics were being questioned. Substitutions being made never seemed significant enough, mostly Ancelotti was simply swapping players from the same position. Once Chelsea began losing matches, their substitutions were not helping. When maybe more attacking players were needed, they were not being added.

After winning the 2011-12 Champions League with very defensive, counter-attacking strategy, Di Matteo has shown his tactical ability with Chelsea’s new dynamic, attacking way of playing. Using players like Mata, Oscar and Hazard to pass and play their way around the opposition has seen Chelsea being labelled a new Barcelona. While they do not play tiki-taka football, Chelsea is certainly playing very impressive football. It perhaps remains to be seen how adaptive RDM’s tactics are when the Blue’s find themselves under pressure, but he has certainly shown an extensive tactical understanding of the game.

Another issue with Careletto’s 2010-11 Chelsea was their squad problems. After letting several key players depart during the summer, insufficient replacements were brought in. The key departures included Joe Cole (to Liverpool), Michael Ballack (to Bayer Leverkusen), Deco (to Fluminense) and Ricardo Carvalho (to Real Madrid), while the major summer imports only included Ramires (from Benfica) and Yossi Benayoun (from Liverpool). Winter saw Fernando Torres (from Liverpool) and David Luiz (from Benfica) added to the squad.

It also seemed that Ancelotti’s purchases were not used effectively enough. Yossi Benayoun’s insignificance to the team is shown by his recent loans to Arsenal and West Ham, while Ramires seemed to take his time to settle in and start playing well. Torres was in poor form before his transfer, and it has often been felt that Ancelotti was pressured into playing the Spanish striker despite the form of Drogba and Anelka.

While Robbie di Matteo has also seen a number of key players depart, his replacements may prove more significant than Ancelotti’s. This summer saw the likes of Didier Drogba (to Shanghai Shenhua), Salomon Kalou (to Lille) and Michael Essien (on loan to Real Madrid) depart the club. With the intention of building a younger, attacking-based squad RDM replaced these key players with Marko Marin (from Werder Bremen), Eden Hazard (from Lille) and Oscar (from Internacional).

Di Matteo not only made better transfers than Ancelotti, but it has been seen that he is getting more out of these new players as well. Oscar and Hazard have combined well with Mata to help create Chelsea’s new dynamic, attacking football. Ramires and Torres have also been used more effectively by the new manager, both key players in getting Chelsea to last season’s Champions League final. Torres’ form has improved considerably, he may not be scoring ridiculous amounts of goal, but he assisting with the creation of goals and with taking-apart defences.

The sacking of Ray Wilkins was seen as a turning point of Chelsea’s 2010-11 season. When Abramovich fired the assistant coach to replace him with his own choice, Ancelotti lost confidence in his own tactics and in his team. A major criticism of Chelsea in recent seasons is the constant interference of their owner. Ambramovich wanted Chelsea to play with flair; and saw fit to bring in the Brazilians Luiz and Ramires, and Torres the Spaniard to achieve this. This interfering disrupted Ancelotti’s management of the club.

This is one mistake that will is not likely to be fixed any season soon. Abramovich is still interfering, as seen by the sacking of Ancelotti, and the subsequent hiring and firing of Andre Villas Boas before Di Matteo took over. The Russian owner has informed RDM he wants a youthful squad, which has influenced RDM’s summer transfers, and he wants Chelsea to play a tiki-taka style of play. While Chelsea is not quite playing the barca-way, they have altered their tactics to a dynamic-attacking system.

The 2010-11 Chelsea squad was too dependent on key players, with insufficient reserves to replace these players if they were to become injured. This was another mistake made by Ancelotti, because a number of injuries during the season depleted Chelsea’s squad. Two key players with injuries during the season were Didier Drogba suffering from Malaria, and Frank Lampard, who after recovering from a hernia operation suffered an abductor muscle injury and was sidelined for 4 months.

After receiving a new injury during Chelsea’s latest Champions League match, Lampard is expected to be out for a number of weeks. During the next few weeks RDM’s squad depth and the dependence on a small number of players will be made clear. However, it would seem that at 34 years old, Frankie is not the key player he once was, and Di Matteo has a number of suitable replacements on hand.

Ancelotti’s father became very sick in Milan during the 2010-11 season, before he passed away. This created a distraction for Carletto, whose mind was not fully on the problems at the club as he worried about his family in Italy. In their current season, Chelsea will be hoping for better luck. Injuries and personal issues are always unfortunate for a club, and while attempts can be made to reduce their affect, they can never be eliminated.

Although it doesn’t seem Chelsea has learnt from all the mistakes of the 2010-11 season, such as the continuing interference of Abramovich, the majority of them have been fixed. Roberto Di Matteo has altered his team’s tactics and his squad’s players in an attempt to play to Abramovich’s liking and to reduce dependence on a small number of key players. All the Chelsea players, managers and fans alike will be hoping for better luck this season because they know the Blues have a team and a manager who can win big things.

One thought on “Chelsea – Learning from the mistakes of Ancelotti”