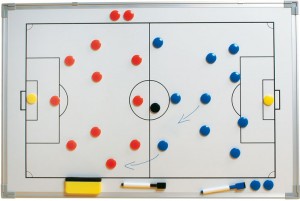 Does anyone remember that time in the mid-nineties where playing three at the back was the ‘in’ thing for English clubs?

When Gary Neville and Andy Hinchcliffe once played as wing backs for England?

It was shepherded out after a period of European club competition mediocrity, but it now seems it is set for a return to the tactics lovers’ good books after a number of sides on the continent have adopted it again – Italy notably used it to nullify the Spanish national team during Euro 2012.

Formations and styles of playing don’t always translate across countries, continents and cultures. But they nearly always have an expiry date. The box-to-box midfielder seems to be no longer a necessary requirement. The same could perhaps be said about the out-and-out striker.

Andy Carroll’s like will seldom succeed in today’s top flight. Mobility is too much of an issue. Gerrard and Lampard have had to evolve into new roles to keep up with their team’s development, and stay in the side. A Matt Le Tissier in his mid-thirties would probably not get into the Southampton side today.

Only one-fifth of teams in the Premier League regularly start with two recognised strikers on the pitch. With a number of the rest actually deploying the “strikerless” formation the aforementioned Spain used to great effect in Poland and Ukraine.

By having more recognised midfield players, the more defined each midfielder’s role will become. Having five in the middle of the park isn’t about numbers; it’s about effectively using the space around the opposing players.

Bayern Munich and Germany’s Thomas Müller has been dubbed ‘the space investigator’ because of his exploits and efficacy in the gap between the opposing defence and midfield.

Three central midfielders can be very different players. Even two ‘engine room’ players can be so different. Take Liverpool’s Lucas and Henderson as examples. They have both been pigeon-holed as workers in that team, in comparison to Gerrard and Coutinho. But manager Brendan Rodgers has tasked them with very specific instructions. One is to press high up the pitch, the other is to plug holes and intercept. A flat bank of three midfielders is rare – it can be exploited very easily, which is why they are often staggered up the pitch.

Look at Jose Mourinho’s Chelsea. It is not unlike Rafa Benitez’ Liverpool of old (a fact which is surprising, considering Mourinho’s suggestion that Benitez follows in his wake): a solid and dependable – if unspectacular – goalkeeper and back five; two deep-lying midfielders, one of which is an enforcer, the other more of a playmaker; three technically sound attacking midfielders, but with more graft and guile than fancy flicks. And then there’s Fernando Torres up front.

It’s been fascinating to see how Torres is used in Mourinho’s set up. There was a time where the former Liverpool man seemed completely detached from the rest of the team. Opposition defences would sit so deep that the space he used to sprint into was just not there.

Chelsea would also crowd out Torres with their other three attackers and a defensive midfielder running from deep. If you add on the marauding full backs, there was nothing for a striker to exploit.

However, since he has cemented his starting place ahead of Samuel Eto’o and Demba Ba, it is like watching the Spaniard play five years ago. Again, he is not really leading the line like Drogba would during his spell at Stamford Bridge. Oh no, those familiar days are gone. Picking the ball up from deep or using his pace in the channels has seen him have much more luck. The epitome of this was seen during Chelsea’s 2-1 victory at home to Manchester City.

Torres had regained his pace, his lethal pace and audacious link up play. I digress.

There is a common belief among football writers that the English tactical game is still following in the shadows of the more innovative Europeans.

But who says there is one definitive, unbeatable way of playing? We all thought Barcelona had it sussed, but then Bayern Munich came along and utterly demolished them.

The best managers in the game are the least stubborn; the most willing to try new ideas, or re-hash old ones.

The only constant in football evolution is that it is constantly evolving.