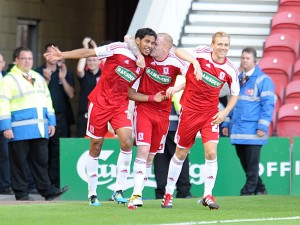 Graham Salibsury was not the most popular man among Cardiff City supporters having made several potentially game-changing decisions. Salisbury also handed out eight yellow cards as Middlesbrough ended Cardiff’s 11 game unbeaten run. The victory for Middlesbrough sees them move into third place in the Npower Championship table whilst Cardiff slip into 5th place.

Faris Haroun scored the winner for the visiting side after Ogbeche and McDonald scored the openers for Middlesbrough. Cardiff replied with goals from Turner and Gunnarsson. Graham Salisbury dismissed penalty appeals from Cardiff City supporters and players when Kevin McNaughton was taken down in the area goalkeeper, Jason Steele. The game ended 3-2 to Middlesbrough.

Other games of the weekend included Brighton v Burnley, Blackpool v Watford and Bristol v Nottingham Forest in which only a single goal was scored between all three matches. Blackpool were unfortunate not to score as attempts from Kevin Phillips and Lomana LuaLua were denied by the woodwork. Brighton suffered two early red card blows which allowed Kieran Trippier to score the crucial goal for Burnley putting them at 11th place. Nottingham Forest failed to score a goal for a fifth successive game and also failed to move out of the relegation zone which was a certainty if they had won.

Portsmouth managed to avoid loss to Southampton when Joel Ward scored in the 84th minute and denied Southampton three points after two consecutive draws. Doncaster made a second half comeback against Leicester who led 1-0 at half time. Billy Sharp scored two goals in the space of just of 3 minutes to steal victory for Doncaster but they still lie at 2nd bottom in the Championship table.

A single goal from Papa Bouba Diop in the sixth minute of the game secured a narrow 1-0 victory for West Ham. Mark Noble crossed in and Diop rose up to head the ball past goalkeeper Luke Steele in some style. After the amusing interruption of a stray cat on the field was dealt with, Rob Edwards almost headed Barnsley back into contention but Rob Green saved. Young Daniel Potts made his surprise debut due to several injuries and suspensions for the Hammers and manager Sam Allardyce said “It was a great debut from Potts both in defence and attack.”

Another game with a single early goal was Leeds v Reading at Elland Road. Simon Church scored a second minute strike from 12 yards out to put his side into 7th place. Ipswich’s win over Derby was similar to both Reading’s and West Ham’s victories as Keith Andrews scored after just 29 seconds of play. Jamie Ward was denied twice by a resilient defensive display from Ipswich keeper Arran Lee-Barrett.

Robert Koren scored twice to secure a Hull City victory at the KC Stadium whilst bottom of the table Coventry lost to Peterborough 1-0 thanks to a 66 minute goal from Emile Sinclair.

Crystal Palace will take on Birmingham on Monday night but for now Southampton are top of the Championship table with West Ham and Middlesbrough in second and third. Coventry, Doncaster and Nottingham Forest make up the bottom three with just goal difference keeping Bristol City out of the drop zone.