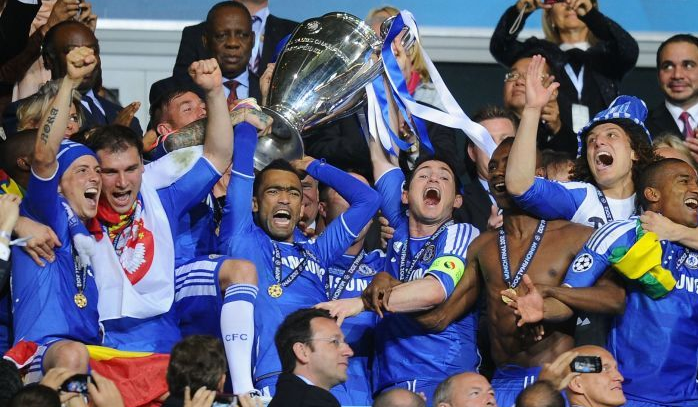 The contest between Bayern Munich and Chelsea was always expected to be a battle of contrasting styles and tactical ideologies. However, following Bayern’s recent defeat in the DFB Pokal Cup against Borussia Dortmund, there was speculation (and rightly so) that Munich’s demise against aggressive and energetic pressing could perhaps lead to Roberto Di Matteo implementing a similar strategy against German football’s most decorated club.

Bayern Munich set up with their preferred 4-2-3-1 formation with Jupp Heynckes encouraging a methodical passing game and looking to focus their attacks through their creative wingers. Due to a number of first team defenders missing (namely Holger Badstuber, David Alaba and defensive midfielder Luiz Gustavo) Anatoliy Tymoshchuk partnered Jerome Boateng in the centre of defence, Diego Contento started at left back and Phillipp Lahm remained at right back. The central trio was covered adequately with Toni Kroos dropping deeper to play alongside Bastian Schweinsteiger, where they both took turns pressing forward and sitting in front of the defence, while Thomas Muller took the most advanced role. Either side of him were Franck Ribery and Arjen Robben, Mario Gomez played up top.

The major pre-game talking point was Ryan Bertrand being named in the starting line up ahead of Florent Malouda, his first ever appearance in the Champions League. The selection of Bertrand, a natural defender, as the side’s left winger gave two possibilities for his role: either a natural defender played high up to use his youthful energy and defensive abilities to pressure the Bayern backline, or alternatively as an extra defender to double up on Arjen Robben and nullify the forward ventures of Phillipp Lahm, or to help pick up Muller who tends to drift to the right.

Chelsea set up in a 4-2-3-1 on paper, but was essentially a 4-4-1-1 as they sat deep and defended for the majority of the game with two banks of four and Juan Mata floating as an outlet behind Didier Drogba. Missing one more player through suspension than Bayern, Chelsea had captain John Terry, Branislav Ivanovic, Raul Meireles and Ramires all absent. Frank Lampard and John Obi Mikel were the holding midfielders with Bertrand on the left and Saloman Kalou on the right. David Luiz and Gary Cahill were passed fit for the match and they started in the anticipated back four with Jose Bosingwa and Ashley Cole either side of them.

The tactic of two left backs has been used before, Valencia tried the same thing by fielding Jordi Alba and Jeremy Mathieu against Barcelona to deal with the extra threat of Dani Alves attacking down the right.

Flow of Play and Gameplans in Practise

Early in the match the intent of both teams was evident, Bayern wanted to control the game and Chelsea were content to defend in numbers and look to hit on the break.

With two technically-gifted, playmaking passers in the deep midfield positions, ball retention and sustaining possession was relatively easy for Bayern. Often winning the ball back quickly and with counter-attacking opportunities limited, due to Chelsea sitting deep and playing very direct, they just looked to dictate the tempo and move the ball to their creative wingers.

The fluidity of Bayern’s “three” behind Gomez was going to be key to them breaking down Chelsea’s defence. Ribery and Robben were expected to be pivotal parts of the Bayern gameplan and were given a lot of freedom to roam around the pitch, often ending up on the same side and overloading one of Chelsea’s wings. There were perhaps two reasons for the freedom of Ribery and Robben. Firstly, with Muller naturally more of a forward than a playmaker playing in the hole, Heynckes may have thought some more creativity was required through the centre, between the lines and alongside one of the wingers. Additionally, Bayern’s fullbacks were choosey in when they were getting forward, thus with the packed defence they wanted to find another way of overloading while remaining responsible at the back to deal with the quick out balls to Mata and long balls to Drogba. They managed both effectively and more often than not won the ball back quickly, stifling Chelsea’s attacks before they even got going, and still managed to create plenty of opportunities to make the breakthrough.

As mentioned, Muller plays more like a centre forward than an attacking midfielder and was less likely to get involved in build-up play than if Kroos was playing in the number ten role. Naturally he pulled into the right-hand channel where he is most comfortable, sometimes dragging Mikel or Lampard out of the centre and freeing up space outside the box. With Schweinsteiger and Kroos both comfortable shooting from distance, this was clearly a tactical ploy by Heynckes, aware that the overloading of the flank would drag players out of the centre. Taking it in turns, one of Schweinsteiger or Kroos would sit deep on Mata while the other ventured forward and both had opportunities from distance.

Chelsea had defended excellently against Barcelona in the semi-finals and managed to score crucial goals on the counter-attack (despite allowing Barca countless chances to score against them and somewhat riding their luck) and Di Matteo opted for a similar gameplan for the final.

While they were defensive, it wasn’t to the same extent they were against Barcelona. At the Camp Nou they were very compact through the centre with Barcelona not offering the same threat out wide or centrally that Bayern provide; their lack of a true striker also made it a lot easier to defend in the air while Gomez is very capable of scoring with both his feet and head in the box. Against Barca their shape often took a 6-3-1 with their wingers very deep and three holding midfielders on the edge of the box pressing Messi and Xavi. This time they more or less defended in a 4-4-1-1, with Mata rarely dropping back to help out in defence. This was a clear tactical direction and was perhaps in part due to the absence of Ramires, whose amazing energy and pace out wide, as well as his intelligent movement and all-round play, gave them a great option on the counter that Kalou, Bertrand and Malouda can’t quite offer. Mata was to be the key to running the Chelsea breaks.

While the Chelsea playmaker was often nullified by one of Schweinsteiger or Kroos, they also looked to play direct to Drogba who held up the ball and won fouls expertly against the Catalans. This time though, with one of their fullbacks always staying back and the two centre-backs doubling on Drogba, their counters were much less effective and it took them 36 minutes until they managed an attempt on goal. They were unable to hold the ball well and gave away possession quickly. It wasn’t until the second half that they managed to play some football of their own (having 48% possession compared to 40% in the first half). Lampard sat much deeper than he normally does but directed their play well. However, he wasn’t much of a goal threat and hardly managed a shot from distance, his late runs into the box were also non-existent.

While the match progressed and Bayern having the lion’s share of possession, they failed to make the most of their opportunities. A number of clear cut chances fell to Muller and Gomez, both getting into dangerous areas in the penalty area but failed to make them count. However they didn’t panic and kept faith in their system. They managed 43 shots over the course of the 120 minutes and racked up 20 corners. Chelsea’s defence held firm though and they blocked a total of 21 the 43 shots by the German side, often forcing Robben (who had 15 shots himself) or Ribery inside to try and shoot through the packed bodies.

Malouda came on for Bertrand in what looked like an attacking move in the 73rd minute, but ultimately Chelsea’s shape and mentality remained the same until the Muller goal ten minutes later.

Robben, Ribery and Kroos had overloaded the left-hand side and Kroos played a ball to the back post for Muller to finish behind Cole. The threat of the wingers meant Chelsea couldn’t be as compact as they were against Barcelona and the danger they posed from out wide caused the backline to shift, particularly with both on the left-hand side, which allowed Muller the space in behind Cole to finish at the far post.

Both teams then made reactive substitutions, Bayern bringing Daniel van Buyten on for Muller to see out the final minutes and Fernando Torres was thrown on by Di Matteo to give them two natural strikers as they pushed everyone forward.

After his introduction Torres played well and his contribution led to Chelsea’s goal which came from their only corner in the match. A block by Frank Lampard allowed Drogba to rise unmarked at the near post and power his header past Manuel Neuer.

As extra time began both teams needed to adjust their shapes. This was simple for Bayern, who moved Tymoshchuk into midfield and Kroos further forward to play as the number ten. Chelsea however didn’t want to keep two strikers up front and reverted back to a 4-5-1 with Drogba and Torres alternating between the right-hand side and the lone striker, shown by Drogba’s clumsy tackle on Ribery to give away the penalty.

Olic came on for the subsequently injured Ribery and after a few brief attacks by Chelsea in the first extra period, the match resumed its regular pattern of Bayern dominating possession in a field stretched by tired bodies in midfield. Ultimately neither was able to break the deadlock and the match went to penalties, where Chelsea was victorious with saves by Petr Cech against Ivica Olic and Bastian Schweinsteiger handing the Londoners their first European Cup.

Chelsea planned on eliminating Bayern’s threats and preventing clear chances while hitting them on the break, but both proved relatively unsuccessful. Bayern managed to produce and create but ultimately failed to make the most of their opportunities until very late (although they did hit the back of the net in the 53rd minute but Ribery was offside) and Chelsea’s counter attacks failed to threaten. As was the case against Barcelona it was about clinically taking chances which Chelsea managed to do, scoring from their only corner of the match. Cech was sensational in goal making six very good saves (including Robben’s penalty) and Drogba maintained his amazing record scoring his ninth goal in his ninth final.

Overall, Bayern’s gameplan worked better and on the balance of play can consider themselves very unlucky not to win. Chelsea defended gallantly, Cole, Luiz and Cahill in particular, but ultimately they allowed too many chances which Bayern should have scored from to have considered their approach to be a “tactical success”.