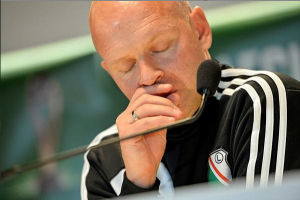 So in the end it happened. Legia Warsaw were kicked out of the Champions League after fielding a suspended player, Bartosz Bereszyński, for the final minutes of their tie with Celtic on Wednesday. UEFA, looking into their rule book, granted Celtic a walkover, which meant they progressed on the away goals rule instead of Legia.

UEFA’s decision seemingly dealt a devastating blow to Legia Warsaw and Polish football.  Poland is desperate for success, and its fans and journalists have minuscule levels of self-confidence.  Here, in the world of football, everything is in a bad way, highlighted by the views of those in the know; corrupt officials, hooliganism, weak scouting and coaching and a poor standard of play in the Polish top league the Ekstraklasa.

Legia’s performance in the two legs against Celtic, suddenly made even the most negative of Polish analysts smile. Here was a Polish club, playing with style, verve and most importantly with self belief. Playing what amounted to a 4-2-4 formation with two deep-lying midfielders and four interchanging attacking midfielders – Michał Zyro, Michał Kucharczyk, Ondrej Duda and Miroslav Radović – Legia tore Celtic apart. The high point was Kucharczyk’s goal which made it 2-0 on Wednesday after a wonderful move between Legia’s attackers.

After the wave of enthusiasm caused by Legia’s result the sense of disbelief and anger was palpable when news filtered through that Bereszyński had been ineligible when he entered the field for the final four minutes of the game in Edinburgh. UEFA couldn’t kick Legia out of the Champions League could they? Not this Legia, one that clearly had the potential to bring Poland’s first Champions League spot for 18 years?

Unfortunately they could. UEFA’s decision on Friday morning relegated Legia to the playoff round of the Europa League, the poor cousin of the Champions League, with much less media attention and importantly hugely reduced financial benefits.  In the aftermath Polish analysts searched desperately for someone to blame, including the head of Legia’s backroom team Marta Ostrowska who didn’t register Bereszyński, the suspended player himself, even Ivica Vrdoljak – who missed two penalties in the first leg which would have been enough to take Legia through. Indeed there has been a desperation to Polish reactions, an overemotionality closely linked to their furious desire for success. Legia had suddenly awoken their hope, and UEFA’s decision had dashed it against the rocks.

While Polish emotional outbursts are understandable I would argue that things look rather brighter for Polish football than they seem at first glance. Legia’s performances against Celtic give much reason for optimism. Finally after a number of years Poland has a team playing a style of football which excites. The interplay between their four attackers would not look out-of-place in stronger European leagues. The most important thing however is it is clear there is a plan, not just fitting square pegs into round holes which is so often the case regarding Polish coaching.

If we look elsewhere a plan is also evident in the work of another Polish side at the moment, Ruch Chorzów. There the former Slovakian national team manager Jan Kocian has worked wonders with a tiny budget (15 million zł – £3 million) – first taking Ruch to 3rd in last season’s Ekstraklasa and then getting the team through to the playoff round of the Europa League.

It is a kick in the teeth for Legia to be thrown out of the Champions League but it is an imperative that the club is not thrown off their long-term project by what has happened. It is clearly bringing results both on and off the field (Legia made 37 million zl – £8 million profit last year). Legia still have the opportunity to qualify for the Europa League, they must cast off the emotional pain and prove that what happened against Celtic was no fluke.  And, then next year, qualify for the Champions League.