Matchday 5 in the Champions League offers a host of clubs the opportunity to qualify for the knockout phase of the tournament while other sides will be anxious to keep alive their hopes of making the Europa League writes Ger McCarthy. 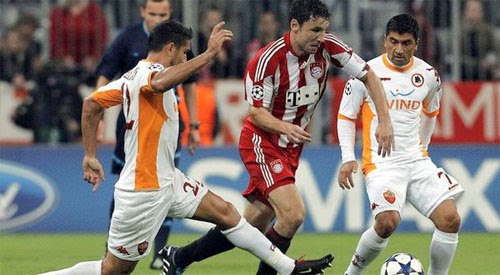 Bayern Munich travel to the Stadio Olimpico in Rome on Matchday 5 of the Champions League knowing a point will guarantee the Bundesliga outfit first place in Group E. The Germans are struggling in their domestic league but have won all four games to date in their Champions League campaign. AS Roma need a result to maintain their position in second place in the group and are coming off an encouraging 3-2 victory away to FC Basle from Matchday 4. Should Roma slip up at home to the Germans the door will be left slightly ajar for either FC Basel or CFR Cluj to join the Italians in the runners-up spot when the two sides meet in Switzerland on Tuesday evening. Cluj and Basel are level on 3 points apiece with the Romanians ahead on goal difference. Cluj host Roma on Matchday 6 so a draw in St. Jakob Park will keep their qualification hopes alive heading into the final round of group games on December 8.

Bayern Munich should be strong enough to get the point they require to the top Group E in Rome while Basel should prove too strong for CFR Cluj in Switzerland.

With maximum points garnered from their four Group F fixtures thus far Chelsea enter Tuesday night’s encounter at home to MSK Zilina knowing a point will secure the top qualifying berth for the knockout phase. Carlo Ancelotti’s side have lost their last three domestic league fixtures but the Champions League fixture with Zilina offers an opportunity to arrest their recent slump in form. The Slovakian side has yet to register a point and have a goal difference of minus 14 so anything other than a Chelsea victory would constitute a major surprise. All eyes will be on the crunch meeting between Spartak Moscow and Marseille in Luzhniki Stadium with both teams currently locked on 6 points apiece. Second place in Group F is still up for grabs and the Russian side will be hoping to repeat their opening day victory (1-0) over the French visitors to all but secure passage into the last 16 of the competition.  Marseille have it all to do in Moscow as they face Chelsea in their final match while Moscow will be away to Zilina on the same evening on the final night of Group F action.

Chelsea to sail into the knockout phase following a comfortable victory over MSK Zilina at Stamford Bridge and Spartak Moscow to take a giant leap towards the last 16 with a narrow win at home ot Marseille.

Jose Mourinho’s Real Madrid may have one eye on the upcoming El Classico showdown with arch rivals Barcelona on Monday the 29th of November when the Spanish league leaders travel to Amsterdam to take on Ajax. Madrid currently top the group with 10 points and will make sure of top spot if they can gain at least a point at the expense of Ajax on Tuesday evening. Mourinho’s side were denied a qualification spot on Matchday 4 following a dramatic comeback by AC Milan in the San Siro, courtesy of Pipo Inzaghi’s later intervention in a pulsating 2-2 draw. The Dutch side lost 2-1 away to Auxerre on the same evening and Martin Jol’s side cannot afford a second consecutive loss if they harbour any hopes of finishing second. AC Milan has gone from strength to strength since their late comeback at home to Madrid on Matchday 4 and currently sits atop the Serie A league standings heading into their crucial Champions League encounter with Auxerre in the Stade Abbe-Deschamps. Milan are 5 points behind Madrid but a point in France on Tuesday evening will setup a mouth-watering clash with Ajax on December 8 for a shoot-out to see who follows Madrid into the knockout phase.

Real Madrid should have enough firepower to secure the point they require to top Group G in Holland while Auxerre are capable of holding a defensive AC Milan to a draw on the same evening.

If ever Arsenal needed a victory to erase the memory of their humiliating capitulation at home to Tottenham Hotspur in last Saturday’s Premier League North London derby it will be away to Braga on Matchday 5 of the Champions League. Arsenal were beaten 2-1 by Shaktar Donetsk last time out but a win in Portugal should all but seal top spot in Group H. The Gunners demolished their Portuguese opponents 6-0 on the opening night of this season’s tournament at the Emirates but can expect a tougher challenge in the Estádio Municipal de Braga on Tuesday evening. The home side are chasing second spot in the group and are 3 points behind Shaktar Donetsk with two rounds of games remaining. The Ukrainians are in Belgrade to face Partizan on Matchday 4 knowing a point will seal their passage into the knockout phase.

Arsenal to take their domestic frustrations out on Braga and secure top spot in the group while Shaktar Donetsk will prove too strong for Partizan Belgrade and also seal a berth in the last 16.