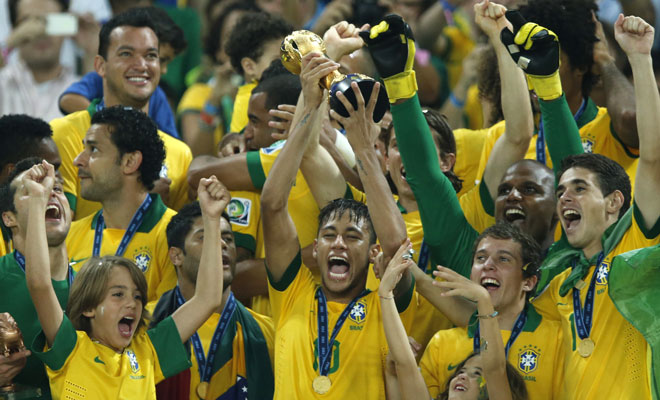 Five months on from a flaccid display in a 2-1 defeat to England at Wembley, things look a lot rosier for Luiz Felipe Scolari’s Brazil.

The bloated shadow that dominated the build-up to that that night, Ronaldinho, is nowhere to be seen.

Brazil, with an average first XI of 26, look hungry.

Indeed, for all the numerous advertising campaigns and showboating of Neymar, the 21-year-old is the only globetrotter Scolari has turned to.

With this trademark team-focused mentality of Scolari, the planets seem to be aligning for A Seleção to thrive under the incredible weight of expectation as the 2014 World Cup host nation.

After all, Scolari has aimed to strike a delicate balance between the attrition of Dunga (2006-2010) and the gung-ho approach of Carlos Alberto Parreira (2002-2006).

As a result, while Brazil have demonstrated incredible pressing without the ball, at the same time, Marcelo and Dani Alves have often been caught out in marauding forward.

Still, what constitutes success for Brazil in 12 months time remains to be seen – whether it is reaching the semi-final or, at the very least, progressing further than their bitter rivals, Argentina.

However, following an impressive June, the signs are encouraging.

Júlio César has re-discovered his form; Dante and Luiz Gustavo are Champions League winners; Paulinho is set for a career-benefiting move to Tottenham; Oscar has oozed class; and Neymar looks to have, finally, found his feet against major international opposition and is showcasing some underrated creativity and selflessness.

Still, to those outside Brazil, winning the Confederations Cup would, probably, only merit cautious optimism but this is a no ordinary nation.

Despite failing to address criticism about cuts to health and education, the 2014 World Cup and the 2016 Olympics are the showpiece events for the Brazilian government to showcase a seemingly thriving Brazilian Utopia and economy.

Even though football excellence and hysteria, in equal measure, are the crux of Brazilian DNA, the nation’s protests during the Confederations Cup prove that the Brazilian government cannot conceal serious public concerns.

From a rise in public transport fares and the dismal state of public services to increased taxes and widespread corruption, the aim of these sporting events was to placate and ease tensions.

Papering over the cracks is a familiar theme on the field, too.

After all, it is a similar fantasy: Scolari is a World Cup winner; Neymar, in the Brazilian public’s eyes, is the best player in the world; and Brazil are on home soil.

What could go wrong?

Contrast this with Scolari’s first reign, in 2002, when for the only time in World Cup history, A Selecao were not expected by their national media to better a quarter-final finish and Scolari’s omission of Romário saw the squad enter the tournament under a cloud.

Yet, that suited Scolari perfectly: the Brazilian established a siege mentality in cocooning his squad with Sun Tzu’s Art of War and, without scrutiny, was able to lay the durable foundations for Rivaldo, Ronaldo and Ronaldinho.

Yet, with Scolari winning Brazil’s first World Cup of the 21st century so unexpectedly, expectations were high that Brazil could match their achievement in 1962 and retain the World Cup in 2006. 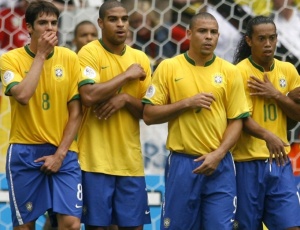 As well as this being owed to Parreira – who led A Seleção to their 1994 truimph, – playing some beautiful football and utilising Kaká, Ronaldinho, Ronaldo and Adriano together, Brazil greatly impressed in the 2005 Confederations Cup.

Aesthetically, Brazil’s 2005 cohort were the most impressive team to ever take part in its 21-year history: scoring 12 goals in five games to win the trophy for the first time since 1997.

Expectations soared: the magic square was deemed a success and Parreira did not alter his tactics ahead of the 2006 World Cup.

Without competitive games, due to Brazil automatically qualifying, the Brazilian FA were driven by globetrotting  – epitomised in the off the field advertising commitments of Ronaldinho et al.

The personnel may be different – with nine of Brazil”s squad, in trademark Scolari fashion, not being European based – but the parallels with today’s crop are stark in Brazil’s recent trans-Atlantic friendly excursions and ‘Neymarmania’.

So, even with Brazil’s absurd 22nd FIFA ranking and Scolari’s sound tactical discipline, home ‘advantage’ may yet suffocate this Brazil side despite Scolari playing to type and suggesting that the fans were the main reason behind a successful Confederations Cup campaign.

The reaction of Brazil’s players” faces, following the incredibly rousing second-half of the Haka-like Hino Nacional Brasileiro before the final against Spain in the Maracanã, seemed the perfect evidence for Scolari’s theory.

However, winning the Confederations Cup final and seemingly banishing the doubts raised in Scolari’s first few months – regarding whether the likes of Ronaldinho and Kaká should still be involved – will have only increased the pressure and raised expectations.

After all, after much, initial, deliberation, Scolari seems to, already, have his young squad in place. How many other nations could say this already?

Yet, while Scolari’s preparations for the 2002 World Cup saw the Brazilian intensely scrutinised and criticised, he will now have to deal with a much different kind of attention.

Brazil, following impressive performances against France, Japan, Mexico, Italy, Uruguay and Spain, will be among the serious favourites and Scolari’s ‘lucky’ legacy of 2002 rests on an impressive showing in 12 months time.

One thought on “Caution required after Brazil’s Confederations Cup victory”