The 2018 World Cup – in which an England side arrived along with low expectations – was a tremendous and much-needed boost for the admiration of the country’s national team, as Gareth Southgate’s squad reached a first World Cup semi-final in 28 years (and only the third in English history).

Ultimately it may not have come home, but a first semi-final in any major tournament for 22 years – since Euro 1996 – truly brought the nation together.

Despite the perceived overachievement, the fact remains that England are still trophyless at a major tournament since 1966.

But on to the next, which will come quicker than expected, in 2019.

Next year will see the inaugural finals of the UEFA Nations League – a new competition established by the federation to “improve the quality and standing of national team football” while doing away with what many fans see as ‘meaningless friendlies’.

Rather than Europe’s national sides get game time together when there is nothing at stake, matches in the Nations League will be played between UEFA’s 55 member associations, split into four leagues (A-D) with each consisting of four groups and a round robin format of matches that are underway, and will conclude in November.

Promotion and relegation occurs between the leagues, with the sides that are entered into the introductory League A – in which England reside – competing for a place at the finals in June next year (semi-finals will take place June 5th-6th, with the final on June 9th). 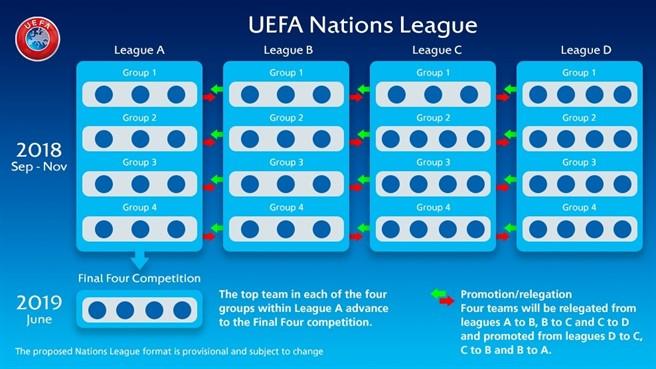 After three matches played, England sit in second place in League A Group 4, with four points collected from a 2-1 home defeat to Spain, a 0-0 draw in Croatia and a thrilling 3-2 victory over Spain on Monday night in Seville.

Spain top the group on six points and are understandably favourites, a best-priced 8/15 with the bookmaker William Hill to win the group and to 7/2 win the tournament, with England’s current position seeing them at a best price of 15/8 to be group winners with 888 and 12/1 to win the whole thing with the same bookie.

That makes England fifth favourites to win the UEFA Nations League, with the other group leaders in France, Belgium and Portugal ahead of England with the odds-makers.

Of course there are plenty of enhanced odds offers available and it’s worth exploring the markets to try and find the best value bets.

What that means is that of the currently second-placed sides among the League A groups, England are the team who are seen to have the most chance of lifting the trophy.

Based on their improving performances under Southgate, that’s with good reason.

England’s performance against a full-strength Spanish side in Seville, and in a match with something actually on the line, not a meaningless friendly, proved that this current crop of players can produce against other heavyweight nations.

This is a young squad, not shackled by the weight of expectation that blighted previous generations. The semi-final run in Russia has boosted confidence and created camaraderie in the group.

With one more group game to play Croatia’s visit to Wembley, coming after Croatia attempt to win their first match of the group at home to Spain in Zagreb, the remaining fixtures are in England’s favour.

Can England win the UEFA Nations League? I wouldn’t start singing ‘It’s coming home’ just yet, but the answer is yes, they can.