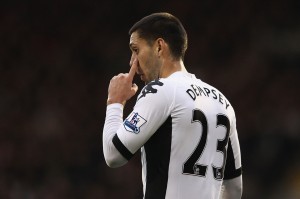 On Christmas Eve, Clint Dempsey had reached an agreement to re-sign for Fulham on a two-month loan deal, the club who provided the platform for the American’s best spell of form in his career.

Dempsey netted 50 times in a six year stint at Fulham, with his final season (2011/12) culminating into scoring a staggering 17 goals in 37 league appearances. His rise was remarkable after starting his first season scoring only one. Dempsey’s rise to prominence correlated with Fulham’s improving league positioning, going from a side that lingered in the bottom half of the table — including narrowly avoiding relegation in the 07/08 season — to a cohesive unit, under the tutelage of Roy Hodgson, whereby Dempsey had left the team firmly in the top 10. A dream run in the Europa League in 09/10 saw Dempsey on the brink of achieving continental glory, but the ambition reached its painful conclusion as the Cottagers lost to Atlético Madrid in extra-time 2-1.

Dempsey was unfortunate never to experience winning silverware in England, whether that was for Fulham or during his spell at Tottenham. Brief moments of personal success at Spurs, such as the winner against Manchester United at Old Trafford and the critical goal + assist to keep Spurs in contention for a Champions League spot against Stoke, were overshadowed by the club’s failure to reach that same, familiar goal that Spurs strive for year on year – a place in the Champions League.

A move back to MLS, this time with Seattle Sounders, was met with pure pandemonium and delirium as Dempsey, in Hollywood-like fashion, removed his hoody and revealed the rave green shirt underneath to a packed out CenturyLink Field. Mlssoccer.com rated Dempsey’s return as the 2013 story of the year. The league had made their greatest statement yet to show they were not a retirement home, signing the USA International when he was fully in the prime of his career aged just 30. 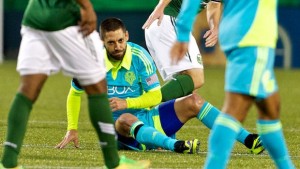 However, his half-season at Seattle had been far from successful. One goal in 13 appearances with a number of niggling injuries and international call-ups disrupting any rhythm, he was unable to help lead Seattle to an MLS Cup after crashing out to fierce rivals Portland in the Western Conference Semi-Final. Dempsey in his time in MLS has shown moments of great flair and trickery but has been unable to do what his career has been prided on – making late runs into the penalty box and scoring goals. Deuce is in need of a mini revival before the 2014 World Cup.

For at least the first two months of 2014, Dempsey will be donning the white and black shirt in West London while Seattle prepare for next season in March. Fulham is a club Dempsey believes ‘felt like home’. ‘Home’ has become a very different place from two years ago. The owner that bought Dempsey to Fulham in 2006 – Mohamed Al-Fayed – sold the club in July 2013 to Pakistani-American Shahid Khan for a reported £200 million. Khan looks to be by no means a Vincent Tan, but could the shared nationality of Khan and Dempsey be one of the possible reasons for Dempsey’s return? – for branding purposes? Signing the captain of the US Men’s National Team is almost certainly going to recapture Fulham’s exposure state-side after the club was once known as ‘Fulhamerica’.

From a purely footballing standpoint, circumstances have certainly changed at Craven Cottage. Fulham have had a miserable start to the 13/14 season, currently lying in 18th place on 16 points with the worst goal difference in the league (-22), their last game ended in a 6-0 thrashing to Hull who are hardly known for their goal-scoring prowess. Goals for Fulham are becoming very hard to come by with Berbatov and the young Swiss centre midfielder Pajtim Kasami, who has already recorded his highest ever single-season goal tally, are currently the club’s leading league goalscorers with 3 with 19 games already played. No. 10’s such as Costa Rican Bryan Ruiz and the ever-enigmatic Adel Taraabt have both endured woeful seasons thus far making it very likely that Dempsey will slot straight into recently appointed head coach Rene Meulensteen’s side.

Fulham predominantly play 4-2-3-1 meaning it is likely Dempsey will play the role of a second striker, where he thrived during his time at Fulham. His doggedness and tenacity are fitting characteristics of what Fulham needs right now, somebody with the confidence and exuberance to change a game by themselves, Dempsey has shown the ability to it before – why not again? Berbatov has had a better goalscoring record when in a strike partnership, his relationship with Rooney at Man United and particularly Robbie Keane at Tottenham were immensely successful periods for the Bulgarian. With Dempsey’s work rate, close ball control and technical ability a relationship between the two could flourish and, hopefully mean more goals for Fulham.

There are two key reasons for Dempsey’s transfer 1) to maintain match fitness for the new MLS season starting in March and 2) To keep impressing Klinsmann. The USMNT head coach implicitly declared his discontent of Dempsey’s decision to move to MLS although he kept him as captain. Dempsey, in his short time at Fulham, will want to show Klinsmann he can still play at the top level and that plying his trade in MLS has not acted as a hindrance to his progression as a footballer. The two month loan is critical period for the US international, he either does well and asserts himself as the poster-boy for World Cup marketing campaigns or he disappoints and plays a more reduced role in Brazil, showing himself not to be the free-scoring midfielder he once was.

Dempsey has placed himself back into the pressure cooker that is the Barclays Premier League. The question waiting to be answered is – will he succeed there once again?

One thought on “Can Clint Dempsey change Fulham and his own fortunes?”