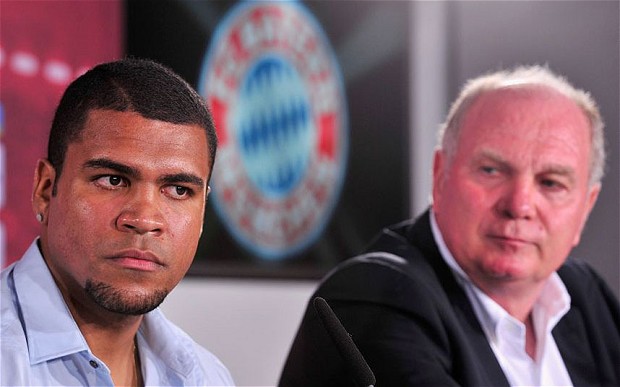 The big money move from South America to a big European club is one of the most treacherously trodden paths a young player can make, as both Kerlon and Keirrison can attest to. The huge pressure of an excessively large transfer fee accompanied with vast cultural differences and overly inflated ideas of the young player’s potential create an extremely hostile environment for any fledgling player. Despite this hardship being common for most South Americans in Europe, very few players have had such a torrid time as young Breno Vinicious Rodrigues Borges, commonly known as Breno.

Excelling through the ranks of Brazilian giant São Paulo, Breno burst onto the scene as Brazil’s hottest defensive talent. Tall, strong and powerful the 17 year old Breno featured 22 times in the heart of São Paulo’s defence as they marauded their way to Brazilian Serie A title in 2007 finishing with a 15 point gap over rivals Santos and the least goals conceded in the league. To compliment his league winners medal, Breno was also awarded Serie A’s Best Newcomer award. Receiving such high profile accolades inevitably alerted the biggest names in European football as teams as illustrious as Real Madrid, AC Milan and Juventus vied for his signature. Having bluntly rejected Madrid, who wanted verification of his age, Breno opted to move to Bavaria and join Bayern Munich on 1st January 2008 for a €12,000,000 fee.

Despite the aforementioned pressures young South Americans face, Breno seemingly integrated with ease into the Bayern Munich team in the latter half of the 2007/2008 season as the 18 year old made appearances in both the Bundesliga and Champions League. This continuation of form only increased his stock as one of Brazil’s most promising talents as Breno proceeded to be included in all 6 games of  Brazil’s Under-23 squad at the 2008 Olympic Games in Beijing, where Breno and the rest of the team secured a bronze medal losing out to bitter rivals Argentina in the semi finals. This, however, proved to be the zenith of Breno’s troubled career as, following the summer of 2008, things slowly started to decline for the young Brazilian.

Breno’s progression stalled in his first full season at Bayern Munich as he received very little playing time from then manager Jürgen Klinsmann and this continued under Louis van Gaal in the following year. By January of 2010 it was widely recognised that Breno needed to play first team football in order to reinvigorate his career that was dwindling somewhat as he festered within Bayern’s ranks. This opportunity came at Bayern’s local rivals Nürnberg who were newly promoted to the Bundesliga after a season in 2. Bundesliga. Managing 8 league games for Nürnberg, Breno got well needed time playing first team football and earned the plaudits of both the staff of Nürnberg and of Bayern. This progress was quickly halted on 7th March 2010 as Nürnberg played Bayer Leverkusen when Breno ruptured his cruciate ligament.

From this pivotal moment Breno’s career and personal life rapidly spiraled downwards out of control. Breno was faced with an 8 month lay off from football which effected him psychologically and, upon his return to football, found himself again an understudy at Bayern. Early 2011 saw the rise of the erratic personal side of Breno as he repeatedly tweeted about leaving Bayern and even offered himself to Santos. This behaviour was only the tip of the iceberg in comparison to what was to come…

24th September 2011, Breno was arrested by German police under ‘suspicion of severe arson’ as €1.5 million worth of damage was caused in a blaze his house in the Grünwald district of Munich. Following an investigation and a stint at home club São Paulo while he waited for the German judicial decision, Breno, in July 2012, was sentenced to three years and nine months in prison for second degree arson. Breno was at the nadir of his career.

Almost 13 months to the day since his sentence, Breno has received a glimmer of hope that his highly promising footballing career might not have completely gone by the wayside. On Monday morning (19th August 2013) Breno returned to Bayern Munich as a day release prisoner. Taking his first step in his rehabilitation and social reintegration program Breno, who is now still only 23 years of age, has been offered a route by Bayern back into football initially as a coach for Bayern Munich II, Bayern Munich’s reserve team that plays in the Bavarian Regionalliga , in the fourth tier of German football. Breno will be collected from Stadelheim prison, where he is currently incarcerated, every day by Bayern youth director Wolfgang Dremmler before being taken back initially after five hours, although this will hopefully be increased to eight hours within the next few months.

Having worked on his fitness in prison, Breno has stated that he is hopeful of being able to train in conjunction with his coaching duties with the eventual dream of playing again. This looks even more hopeful by the fact that Bayern president Uli Hoeneß has pledged to do all he can to help young Breno. His possible return, however, will not take place in Germany as Breno will be deported back to his native Brazil at the end of his sentence. Hoeneß, during the press conference to welcome Breno back to the club, mentioned that there was interest from São Paulo to reintegrate Breno in a playing capacity. The future of Breno, recently one of Brazil’s most prodigious talents, is still very uncertain yet this ray of hope offered to him by Bayern could be the resurrection of a player who career and lifestyle went so dreadfully wayward.