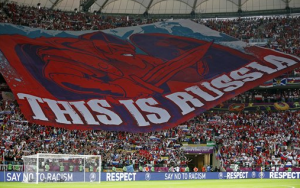 We had a US lad with the most puzzling background (and life) confirming that big brother has indeed been watching us – nothing shocking to the locals of Eastern Europe. We’d (Vladimir Vladimirovich Putin) VVP point out a slight flaw in David Cameron and the Warmongers (great name for a hard rock Lordy type group) thinking that providing further support to “rebels” who eat organs of dead opponents was a good thing. And there is continued fighting in the Caucasus (including Dagestan) with security operations trying to corner Islamic militants who were forced out of Chechnya and now operate in the refugee camps and mountain lands surrounding it. Of course there was some football, down south in Brazil to fill in the bits of the year when all we have to deal with are agents and journos trying to make deals and news (often hand in hand) and the lives of football club owners and operators more exciting.

As riots raged outside the stadia in Brazil and tear gas floated and rubber bullets bounced, foreign media gleefully sloshed about in their self-satisfactory effluent that they splashed all over FIFA and associated characters. There was a yawning gap between the coverage in Ireland, the UK, Germany and elsewhere, and the complete non-reporting of the events and issues in Russia. It has surprised me since the start of the Confederations Cup that even hard core sports fans have heard nothing of the violence that, for a change, is not related to clowns trying to pretend to be hardmen. Look through Russian news portals and you really have to dig deep, really deep, to find a mention. Brazilians are protesting over perceived social injustice and corruption due to the World Cup in 2014 and Olympics in 2016. The government are trying to do their best to put on a happy face and placate those in the streets, though in the Kremlin-controlled media (i.e. 99%) of Russia reporting such events might, just might trigger a similar reaction here.

The arrival, we are informed, of Edward Snowden to Sheremetyevo caused foreign and local media to besiege their venerable airport and wait for his next move. Lost on many is the irony that even if he were to become a refugee in Russia, China or Ecuador (the latest option), he’s simply following a path tread by the likes of Berezovsky and Borodin (UK) and Konanykhin and Godunov (USA). That he chose to stand up to his government and protest information gathering and privacy breaches has him lauded by the same people who praised Pussy Riot last Summer – though I haven’t heard Paul McCartney or Madonna, or UK and US politicians back him thus far. And still he waits, remaining in the news while more pressing items slip by.

When the new Zenit stadium is reported to cost upwards of $1billion and the opening delayed by two years, when the hundreds of millions of dollars allocated for the 2014 Winter Olympics in Sochi seem to disappear into the Black Sea, and the tip of the iceberg only seen in how public funds have been misused to increase Russia’s profile using sports, (the terribly overblown and largely useless Universiade in Kazan a great example) there might be a few voices grumbling dissent. Cleverly it’s not news, nothing was left to chance and like the famous line from the famous movie “Hunt for Red October”, The average Russky, son, don’t take a dump without a plan. The silence of the Russian media and chattering classes can be taken that the lovely Russian Summer, with beautified parks, open air cafes, free yoga sessions and tea sampling (not to mention increased dross on TV) are doing their job. The people who marched in protest for the sake of protest behind banners and people who advocated removing dark-skinned (Caucasian) people from Russia and that VVP and his cronies take their ball and go home, now have better things to do since (like the Irish media in relation to Giovanni Trappatoni) they’ve been listened to. Everything seems to slip by happily as it’s not so important, for now.

So while Brazil burns, Russia enjoys another warm summer and the self-satisfaction meter of those on their roller blades and bikes reach ever higher degrees of smugness. And still the crumbling bastion of Russian sports continues to fall apart. The tens of millions of dollars supposed to put Russia on top of the sporting world go back to the same suspects, while football clubs look to sugar daddies and government agencies to provide. As the heat of mid-summer grows, non-alcoholic mojitos have firmly replaced the outrage of the “Free PR” campaign from last year. Apparently all is well in Russia, nothing to see here, move on – especially you Mister Snowden (unless as VVP says he stops annoying the USA), when we’ve something else to distract us!