The opening lines of Yesterday’s Men by Madness could describe Bradford (Park Avenue) FC, a revived club with an evocative name, kept alive by hugely committed fans and investors and with history twisting its ear. As you enter the Avenue clubhouse, you are drawn immediately to the Len Shackleton memorial commemorating the Bradford-born England international who left Avenue for Newcastle in 1946.

Avenue’s 8-2 win at Manchester City in the FA Cup  that year – with Ron Greenwood at centre half for Bradford, Shackleton at centre forward and Frank Swift in goal for City – is celebrated in song every week by Avenue fans, along with lesser-heard ‘Aye Aye Rhubarb Pie (Avenue will never die)’ In the music hall tradition of the terraces, younger Avenueites sing a ripe – and officially disapproved – version of Aston Villa’s European anthem ‘Allez Allez’, celebrating their desertion of Bradford City, and lauding Harold, rather than Villa Park. It is localism in the best sense, and, with expletives deleted, a refreshing change from more cliched anthems.

The songs, and clubhouse photos of Shackleton, reveal a historic hankering the new Avenue has tried to satisfy. The original club was voted out of the Football League in 1970, going bankrupt four years later, A reformed Bradford (Park Avenue) – with brackets added to distinguish from neighbours City – re-entered Saturday football in 1988 in the West Riding County Amateur League; step 13 in the FA structure. Thirty three years on, Avenue are established at Horsfall athletics stadium, a mile from Odsal rugby ground, and on borrowed time in step 2 National League North.

The stated capacity as Horsfall is a generous 3500; one that was tested at the FC United play-off semi final in 2011. Flares, pitch invasions and police all made unwanted appearances, before an official record attendance of 2785*, and the capacity, imagined or not, is hardly threatened at today’s fixture with promotion candidates Chester.

The visitors beat Avenue 2-1 at Deva Stadium last November, and in current newspeak today could be ‘challenging’ for the home side, who have collected just five points since. Off the field. Avenue owner Gareth Roberts’ mid-season message updated fans on the recently agreed stadium lease and a £500,000 project to share a new 3G pitch with West Bowling ARLFC.

We started so far behind everyone else this season that if we can stay up, it would be the biggest achievement for me so far.

His realism was justified as early-season upheaval had left its mark, and Avenue start today’s game 15 points adrift of third-bottom Gloucester. Given the results, the drop in average crowds from last season – down 58 to 467 – is understandable, squad strength and simple economics suggested a struggle (just three of last year’s players featured in Bowers’ first game back against Hereford), and so it has proved.

Despite everything, Avenue retain a hardcore following of 300; and away support that can number 100 plus. The train to the York fixture two seasons ago resembled a football special, albeit one full of fifty-somethings (guilty as charged), with the demographic skewed by fans of the original club. As attention turns to the Chester game, the pleasures of the day distract from the potential result. 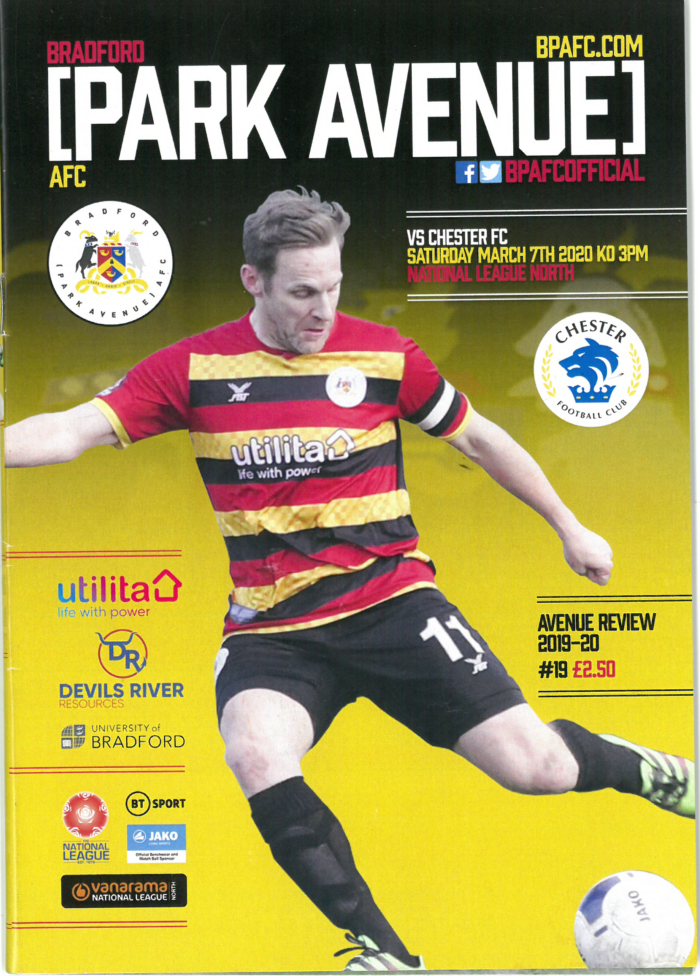 Two advantages of National League football are the refreshing absence of VAR, and touchline punditry that trumps the Carragher touch-screen. Added to which, today’s visitors, despite their lofty position, arrive without any Anfield-style hubris. The reverse fixture finished 2-1 to Chester in November, and a similar performance, if not result, would satisfy most; many supporters have accepted relegation, focussing instead on simple enjoyment.

And there is much to enjoy, even staring up from 22nd place. Pre-match, the clubhouse can resemble an improvised character-comedy, (think; “I Didn’t Know You Cared” from the 70s) and is a potential gift to script-writers. Sadly, two of the characters, Ronnie ‘Mark ‘Em Tighter’ Gresham, and George “We’re Sticking With You” Moffatt – his chant a bizarre channelling of the Velvet Underground – have now passed on.

Ronnie and George were regular away fans, and a silver lining to any relegation could be resumed trips to Stalybridge Celtic and Ashton United; the latter at the wonderfully atmospheric Hurst Cross. Included in the package is a visit to the essential Stalybridge station bar. At the intersection of football and real ale, the place is non-League in microcosm. Off-field affinities will continue next season, where competition and cash flow maybe more amenable.

This cuts little ice at supporters’ forum Avenue Online; “Who the hell wants that NPL Atherton Collieries, Morpeth, Bamber bridge watched by 60 people?” said barmyarmy; betraying both a  hankering for the Football League at Horsfall, and a gross under-estimate of NPL crowds. Sadly ‘the  League’ is another country for Avenue at the moment. Aside from which, Atherton Colls and Bamber Bridge are terrific away trips – surely a raison d’etre ‘at this level’.

Chester may not be at this level much longer, their league position suggesting playoffs at least, and a swift return to the National League after last season’s relegation. The original club (owned by the notorious Stephen Vaughan) was wound up in March 2010. Supporters group City Fans United formed the new Chester FC later that year and moved into the vacant Deva Stadium. These days, Chester are guided by ex-Salford City management duo Bernard Morley and Anthony Johnson, who left Moor Lane in May over ‘irreconcilable differences around personal terms.’ Make of that what you will. Two defeats in February slowed Chester’s progress, and they arrive fifth in the league, nine points behind leaders York.

Chester’s squad includes Akwasi Asante, who claimed the winner in the clubs’ November meeting, but doesn’t make the starting XI. For their part, Avenue have been shorn of Salford loanee Jake Beesley, (21 goals last season), and Lewis Knight with six is top scorer this term. Avenue take the field modelling their current kit, a garish update of the Shackleton-era red, amber and black hoops; colours that rotate with the green and white of the 1950s and 60s.

Come 3 o’clock, Avenue look the better side. They go ahead on 42 minutes when Ryan Toulson’s cross is forced in by Tom Clare. The visitors come out stronger after the break and equalise direct from a corner by Matty Walters. Off the pitch, some younger fans square up to each other, while on it, Bower is booked for kicking the ball away in injury time, and captain Ollie Johnson’s header secures Avenue’s first win since December.

Though Bradford remain bottom, the upbeat atmosphere in the clubhouse is a rare tonic. Players, fans and management mingle, sharing a drink and a bond rarely seen at a higher level, as Mark Bower discusses the day’s events. The 40-year-old played 241 games at centre half for Bradford City, which earns respect, despite his ‘Manningham’/ City connections. Fans also remember 2015/16 (Bower’s first as season as manager), when six wins in seven games lifted Avenue to an unlikely 14th place. A win at Kings Lynn on Tuesday would bring hope of something similar.

The customary man of the match awards acknowledge both teams. As Darlington’s Twitter feed will confirm it’s a touch of class appreciated by visiting clubs, though not today by Chester. Defeat by the bottom club proves too much, and they are straight on the bus home. As people leave, thoughts turn to Kings Lynn and the Northern Premier League, where Avenue might be next season. On today’s performance they will have to be dragged by the ear.