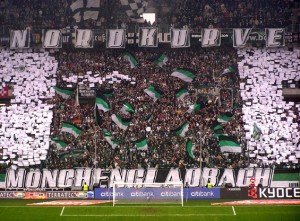 It was the late Tottenham Hotspur manager Bill Nicholson who said “If you don’t have to drag yourself off the field exhausted after 90 minutes, you can’t claim to have done your best?”

It was this kind of rhetoric that saw him lead Spurs to League and Cup success in 1961 followed by a successful European campaign the following year which saw them narrowly miss out on the final losing 4-3 on aggregate to eventual champions Benfica.

Effort is often cited by fans as the aspect of a player’s game that they appreciate most. So often managers will trot out in front of the media after a game to deliver the tired football cliché “well the players gave 110% out there for me today”. It offers little insight to how the game has panned out; and even less tactical insight as to what occurred during the game. What does it even mean to give 110%? Does the manager suggest that a player who gives a mere 100% is not worthy of praise?

110% was associated with Bundesliga side Borussia Monchengladbach in 2011, not because they gave above humanly possible effort on the pitch, but because they significantly overachieved.

On 14th February 2011 Lucien Favre took over at Monchengladbach with the West German side sitting perilously at the bottom of the Bundesliga table and staring relegation in the face.

Having only won 4 of their previous 22 league matches under outgoing manager Michael Frontzeck the club looked destined for the drop. As is so often the case, Mochengladbach were inspired into action by the new coach and avoided relegation with a play-off victory on the final day of the season.

Monchengladbach finished the season as one of the inform teams of the league, however, after seeing the side fail to push on from their twelfth placed finish in 2009/10, fans of the German side could only be cautiously optimistic about their chances for this season.

Summer spending was modest with Monchengladbach having the fourth lowest outlay in the league spending just € 2 milllion as Favre was forced to unearth rough diamonds as opposed to proven first team players.

Expectations haven’t just been surpassed this season, they have been blown out of the water. Things started well for Mochengladbach as they won away at league favourites Bayern Munich 1-0 with Igor De Camargo making the most of a Manuel Neuer mistake to score the only goal of the game. They have not looked back since and round themselves sitting in fourth as the winter break loomed having racked up impressive wins over Wolfsburg and Werden Bremen in the league and Schalke in the cup.

Monchengladbach have been fortunate to have unearthed another exciting young German Gem. Marco Reus has been on terrific form so far this season scoring 12 goals in 18 league appearances and attracting interest from Europe’s major sides in the process. Released from his home team Borussia Dortmund in 2006, Marco Reus will returning home once again in the summer for a reported fee of €17.5 million. Borussia Dortmund manager Jurgen Klopp seems to have netted himself a bargain addition to his already impressive side of exciting young talent. Turning down reported interest from the likes of Arsenal and Bayern Munich Marco Reus seems to have his feet firmly on the ground and if he continues his form into the summer national coach Joachim Löw  will have another German youngster ready to make an impact in a major international tournament.

Having a look at the stats is one thing, but to really appreciate the impact that Favre has had on Monchengladbach you need to consider the improvements in the points total in 2011 in comparison to 2010.

The graph below shows the 10 teams with the most improved points totals in the 5 major European leagues. Udinese, Atlanta and Levante have clearly been the big improvers in the Italian and Spanish leagues but no side have witnessed anywhere near the improvement that Monchengladbach has. Under Favre Monchengladbach have more than doubled their average points per a game up from 0.82 to 1.74 representing a spectacular improvement of 110 percent.

Times are good for the West German side and with 10 points from a possible 12 so far this calendar year, including emphatic victories over both Bayern Munich and Schalke, a Champions League spot is becoming a realistic possibility. Borussia Monchengladbach was 5 times Bundesliga champions and 2 times UEFA cup winners in the 1970’s; whilst it is certainly too soon to suggest a return to this level of dominance, who knows what can happen with drastic improvement such as this. Just as Bill Nicholson found out with his Tottenham Hotspur side in 1961, Favre and Monchengladbach have found out just how important giving a 110 percent is.

Graph with thanks from http://nasher3230.wordpress.com/