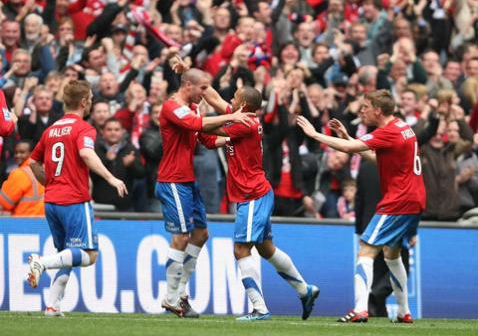 York City came from behind to record their second Wembley win within a week and joined Fleetwood in earning promotion back into the Football League.

Within two minutes of the start of an exciting cup final, Andre Gray put the Hatters ahead from Robbie Willmott’s cross but were immediately put on the back foot from York, who had numerous chances  but couldn’t quite hit the target. Ashley Chambers levelled the scores after 26 minutes when he scored after Luton had struggled to clear a free kick. Chances came for either side but the half ended all square.

The second half was only two minutes old when Matty Blair scored from point blank range and, despite appearing to be offside the goal stood. Once again chances were plentiful but neither team could find a way past the opposition. Luton piled on the pressure towards the end but a tremendous defensive effort from York made sure they clung on to their slime lead and

The Luton fans made up the majority of the impressive crowd, and they will have left crushed at missing out at the last hurdle again, after losing out to AFC Wimbledon at the same stage last season, but just as the other games these two played against each other during the regular season, the Minstermen came out on top.