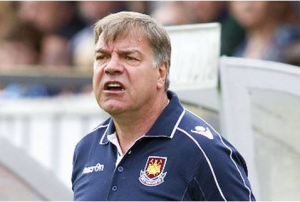 Publicly imploring his players to come out fighting last week, after a series of passive displays and two high-profile thrashings, was something of a gamble for Big Sam. After all, any failure by his players  to respond to his rallying call would see talk that he had lost the dressing room gain greater traction.

But whether it was the return of some key players, a belated sense of professional pride or a display of faith in their under fire manager, West Ham’s hard fought victory against fellow strugglers Cardiff has relieved some pressure on the highest paid English manager, according to figures released by Sporting Intelligence.

No doubt Allardyce breathed a sigh of relief. He may have a rather inflated view of his own worth – but he’s no fool. Some managers just don’t fit the culture of a club – and Big Sam and West Ham make uncomfortable bedfellows. Hammers fans have been brought up on a diet of attacking, positive, grass football. Big Sam prefers a more direct, robust, often aerial game. He’ll be well aware that he’s merely tolerated by the majority of fans, and that toleration applies only while he’s getting results. The reaction of the fans during the Etihad and City Ground humiliations will have left him in little doubt of that.

The manager won’t have been the only one feeling a sense of relief on Saturday evening. The two Davids, West Ham’s owners, Gold and Sullivan have been very public in their defence of Allardyce of late. Little wonder – after all, they have made him the 13th highest paid manager in world football! According to the figures released by Sporting Intelligence last week, Big Sam earns a reputed €3.5 million annually, a figure that sees him comfortably out earn the likes of Antonio Conte at Juve and Diego Simeone at Atletico Madrid, two highly regarded managers operating at the sharp end of Serie A and La Liga , respectively, rather than in the Premier League relegation dogfight.

And fat contracts usually entail tastily expensive severance packages – so goals from Carlton Cole and Mark Noble and a timely, resilient defensive display, will doubtless have been welcomed in the boardroom. So too will Andy Carroll’s 20 minute cameo – the player around whom Big Sam’s master plan revolves. Allardyce preaches effective football, and the big Geordie improves West Ham’s chances in that regard.

Culture clashes in football are interesting talking point, but it’s results that determine the length of a manager’s tenure. Three points will see fan toleration extended and take pressure of Sam Allardyce and his paymasters, for now at least. But with West Ham’s injury crisis easing, the fans will want to see more of what they witnessed at Cardiff over the coming weeks. Only then will Big Sam come close to justifying his enormous pay packet. His public gamble paid dividends, for the time being at least.