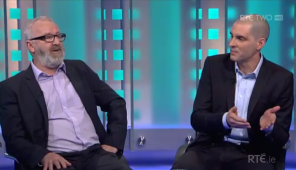 Football in Ireland is televised by our national broadcaster, RTE, on a weekly highlights show called “Soccer Republic”. I know a lot of League of Ireland fans are not happy that the show does not exclusively highlight League of Ireland coverage, and the fact that it was moved to the graveyard shift on a Monday night.

Some might argue that the national broadcaster is financed by the TV licence fee and is not a solely commercial enterprise and therefore it should show Irish Football not because of its popularity but because of the fact that it’s Irish. Personally, when you consider that RTE didn’t cover the Irish team competing at the Winter Olympics, or any of the Giro D’Italia stages in Ireland, I’m thankful that they show the League of Ireland at all!

Getting back to “Soccer Republic”, last Monday, the 18th of May, the started with a debate on the state of the League of Ireland and why 42,517 would pay to watch Shamrock Rovers host what was termed a Liverpool reserve team when our league is constantly on the edge due to lack of support. When I say debate it was more like a typical pub discussion where a bunch of lads voice their opinion and the whole thing goes nowhere.

So what was the point of it? Why did RTE purposely open the show with a badly organised debate that seemed a touch one-sided? I say one-sided because as well as the bar room discussion, there was an information bar scrolling across the bottom of the screen and a phone call to a historian both of which excused football fans for not supporting their local club. On behalf of all the volunteers that work hard trying to keep their football club running I would like to address some of the points made on the show.

There was lots of sense and nonsense spoken by both sides. Firstly, I’d like to say that Irish supporters of Liverpool FC are not morons, they are normal people like you and me. And like you and me they are susceptible to marketing. Liverpool FC are an extremely wealthy and savvy international business that is branding and marketing itself 365 days a year. In the 1960s Liverpool fans began singing “You’ll never walk alone”, today those words are a registered trade mark owned by Liverpool FC. This is just one example of how seriously Liverpool FC takes the world of marketing.

One of the pundits also stated that the League of Ireland is not a professional league. I’m not sure whether he meant this or maybe he meant it wasn’t a rich league, but one thing is for sure, it is a professional league. An amateur sport is one in which the rules state that it is illegal for players to receive payment for participating, the rules of a professional sport allow for the payment of players. The Leinster Football Association voted in 1905 to allow for the payment of players (the IFA voted for professionalism in 1894). Not all players in our league are paid to play football but some are; the number of professional players or how much they are paid doesn’t matter. The fact is you cannot directly pay players a professional contract in an amateur sport, therefore the league is not amateur.

There was talk of football being the only career in this country where kids dream of going abroad to prove themselves rather than staying in Ireland. This is true of any kid with aspirations in the entertainment industry. Young musicians want to be make it big in the UK and America, young actors want to be in Hollywood. Why is this? Quite simply the answer is wages. Never mind the glamour, people will go where the money is. If the wages in Irish football were as good as the English Premier League it would look a lot more attractive to both Irish and foreign players.

We heard a phone call with a historian who talked of the long history of Irish fans travelling to England to watch football matches. This cannot be disputed, I know people who have been going to games since the 1970s. But the show tried to suggest that Irish fans where travelling to watch Everton play in the 1930’s. Given the state of the Irish Economy in the 1930s, I find this a bit hard to believe. At that time we were engaged in an economic war with the UK, our biggest trading partner. It wasn’t until the end of the decade and the normalising of trade that our economy started to improve. We also had a housing crisis in our major cities. We have all heard enough stories in the media about tenement life to know just how appalling living standards where for people living in these conditions. A country run by a socially conservative government combined with financial problems made sure that the housing crisis remained throughout the 1930s. I know that all statistics throw up abnormalities and It is possible that some people could afford the luxury of travelling to England just to watch a football match but it would have been highly unusual at the time.

One of the panel mentioned how Jackie Carey brought his Manchester United team to Dublin to play on front of a packed house. This has always been the case when big teams came to town. In the days before the removal of the wage cap and before Manchester United where a global business, I’d guess that a lot of people went to these games out of curiosity. The biggest crowd I’ve seen watching Bohemians play in Dalymount Park was when Rosenburg came to Dublin for a Champions League qualifier. The fans who turned up, who were not regulars, were curious to see our best team play a known European club, they were not Rosenburg fans (at least not all of them!).

The fact is, more Irish football fans go to watch games in Ireland every weekend than travel to England or Scotland. In my opinion it’s football fans that don’t go to any live games that League of Ireland clubs should be targeting. If you can afford the comparatively huge expense of travelling to England to watch a game of football then fair play to you. The first time I travelled to Anfield to watch Liverpool, they were beaten 0-1 by Leeds United in a dreadful game of football. By the logic of some Liverpool fans interviewed outside the Aviva Stadium I should’ve judged every English Premier League game on this one and never watch another match! At the same time, if English football fans had the same attitude as most of their Irish equivalent there would be no four tier football league. Instead there would be about ten clubs that are of a high enough standard to deserve their allegiance!

If we move on to last Sunday’s friendly between Ireland and Turkey, 25,191 fans turned up to watch their national team. That’s a little over half of the Rovers v Liverpool attendance. It may be that after a couple of generations of watching football indoors on a TV screen, fans have no interest in reality. One thing is for sure, if the antipathy toward our national league is now extended to our national team, the FAI needs to wake up and do something quickly.

For more on this topic, check out the latest Hold the Back Page podcast.

One thought on “The big debate on ‘glamour friendlies’ in Ireland”