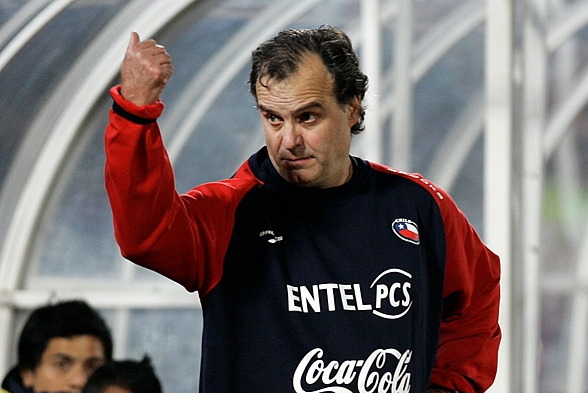 The display put on by Chile was one of the few delights at the World Cup four years ago in South Africa, thanks to the tactical prowess of manager Marcelo Bielsa.

The 3-3-1-3 formation implemented for the tournament saw La Roja earn victories over Honduras and Switzerland, and a narrow defeat to eventual winners Spain in Group H. Although a heavy 3-0 loss to Brazil in the next round sent Chile home, the plaudits for Bielsa were in abundance and many believed the future looked bright with the Argentinian at the helm.

Bielsa, now 58-years-old and a former defender in his younger days, already had a CV bursting with accolades and achievements before the 2010 World Cup, including two Argentinian league titles, a Gold medal from the 2004 Olympic Games and runners-up medals from the Toulon Tournament, Copa America and Copa Libertadores. However, his dream of bringing home silverware with the Chilean national team came to an end when he resigned in protest to the election of Jorge Segovia as President of the FA in February 2011.

Loco Bielsa wasn’t short of job offers and in the following autumn found himself in charge of Athletic Bilbao, where an incredible run of form ended in a Europa League and Copa Del Rey final. One of the most memorable matches in this run, which symbolised the style of all out attacking football that Bielsa endorsed, was the 3-2 defeat of Manchester United at Old Trafford, followed by victories and comebacks against Schalke and Sporting Lisbon before a disappointing final against fellow Spanish competitors Atletico Madrid, which finished 3-0.

A victory in the final may have stopped the departures of pivotal players such as Javi Martinez and Fernando Llorente, and almost certainly would have ensured that the Basque team finished higher than 12th in 2012-2013. Once again, many believed it wouldn’t be long until Bielsa rocked up at another team and continued his spectacular work. However, it won’t be until the opening round of matches in next season’s Ligue 1 that we will see the bespectacled Argentinian coaching again, at the Stade Velodrome.

It was announced at the end of May that Bielsa had been drafted into French club Marseille to turn their fortunes around, especially after a season in which they lost all six games in their Champions League campaign and wouldn’t return to Europe for another 12 months due to finishing sixth in the league. The fresh face of Marcelo Bielsa will be welcomed by many L’OM fans who have endured a horrible season which revealed many rifts between players and coaches, and coaches and club management, eliciting protests from supporters in the stands.

Although it is great news that Bielsa will be returning to football, why has it taken so long? The ex-Newell’s Old Boys defender has enjoyed a successful career at club and international level, has rejuvenated and propelled previously under-achieving teams and has a distinct style which excites fans all over the world. Considering what he has won so far, many believed he would eventually earn the hot seat in Catalonia, but it seems clubs are most interested in what he hasn’t achieved.

The reluctance of European football to properly appreciate achievements and victories on other continents has meant that offers for Bielsa have been limited – criticism his managerial colleague Manuel Pellegrini had to endure all season from the English press before he lifted the Premier League trophy. Hopefully he’ll make many owners wish they’d taken a chance, and hopefully Marseille will be the ones to benefit from a leap of faith in Bielsa.