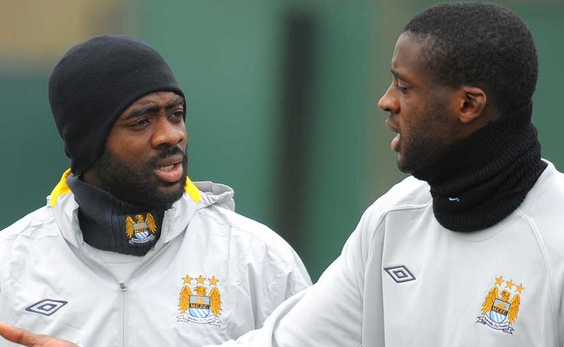 Here I put together my best Premier League squad consisting of only present African players.

As Ikeme is actually, by my calculations, the only African keeper to ply his trade in the English top flight at the moment – he must be penned down as the number one. The Wolverhampton Wanderers stopper has never really been able to really cement a first team spot, as a result he’s often been shipped out on loan to lower league sides. At 25, he’s only managed 13 appearances for the Midlanders but has recently been called  back from Doncaster as first choice Wayne Hennessey is injured. In terms of his international experience, Ikeme has been called up to the squad but never actually featured for the Super Eagles. Ah well, he may not have played much Premier League football but he’s the only option to have.

The former Arsenal defender has been, since returning to the City set up after his long spell out, solid and formed a strong partnership on the field with Vincent Kompany. Toure, who is just 5 caps off 100 for his national team, is the heart of the defence with his ariel ability, efficient tackling and commanding edge in battles with strikers. The 31-year-old, who has featured 19 times for City this season, will be hoping to earn some much needed silverware with Roberto Mancini’s side come the end of the season as they fight for the title.

Although Bassong’s chances at Spurs have been somewhat restricted since signing in 2009 from Newcastle, the powerful and pacy central defender is certainly not short of talent. Although injury prone at times, when fit Bassong is a force to be reckoned with at the back with his pace, ariel power and ability to pick out a pass. His time at Wolves, who he joined on-loan in January, has been a little stop-start after picking up niggles here and there and with a change of manager taking place. At 25 years of age, he has a lot to learn – but he, in my opinion, has the potential to become a consistent performer in the Premier League with a top club.

Like Bassong, Assou-Ekotto is another player from Cameroon who plays for Spurs – although his story is a little different. Having played second fiddle for so long in the early 2000’s, it’s not been up until recently since the speedy wing back has started to blossom at the Lane. Now, he’s the first choice left back under boss Harry Redknapp and deserves to be after impressing last, and from what I’ve saw, this season. The tricky no.32, who made a name for himself with RC Lens, is known for his trademark rocket shots – with all three of his Spurs goals coming from this sort of technique. Watch out for him on the left, he’s a real menace.

For me, Song has been one of the stand out performers in the Gunners’ midfield this campaign. The lynchpin in the middle of the park, the engine that is so often found ruthlessly, efficiently, effectively breaking up play and earning assists. In-fact, he can’t stop producing the latter as the Cameroonian has 14 of them this term, quite surprising actually given the position he operates in. I’ll always remember his outstanding ball to Robin van Persie in Arsenal’s 2-1 victory over Liverpool a month back, finished off beautifully too, mind you. He’s really came out of his shell this year, and his robustness and power has never been more on show this season.

One of Europe’s finest midfielders, some would say. Quite a label eh. When he’s not on the touchline injured, then I’d agree with his statement. But, unfortunately for the Ghana international, he’s been so unlucky with injuries which has seen him lose so much playing time with the Blues over the years. The 52-cap Ghanaian has only featured 9 times in the league this term, showcasing his magnet to injuries. But, no-one can doubt his ability on the field when not plagued with injury issues, with his possession of impressive long range shooting, grace on the ball and energy in midfield. Arguably Ghana’s finest midfielder for years.

The powerhouse that is Yaya Toure. Strong. Athletic. Aggressive. Having learned the ‘tikka-takka way’ with Barcelona, who he spent three years with between 2007 and 2010, Toure is more than capable of getting the ball down and playing but does have that alternative physical approach in his locker, which has helped him settle into life in the Premier League. An ever-present figure in City’s title challenge this season, the brother of Kolo has clocked up a total of 36 appearances for last season’s FA Cup winners this term and has been the driving force alongside the likes of David Silva and Samir Nasri. Although disapointing at the African cup of Nations, that was just surely a blip.

The elegant, tricky, ever-dangerous wing wizard, who was voted Football League Player of the Year last season in QPR’s promotion push, has struggled to find his feet in the top flight with just one goal so far – coming against the side’s 2-1 win over Arsenal. The midfielder has talent, there is no doubt about it. But, all the transfer speculation has seemed to have unsettled the Moroccan at Loftus Road and reports suggest he could be off to Paris Saint-Germain in the summer. For the Premier League’s sake, I hope he stays put. Despite being selfish at times, Taarabt is so skilful and illustriously composed with the ball at his feet that most full backs, even in the Premier League, struggle to handle him. Maybe next season will prove out to be a better one, that’s if he cannot be lured away by big money abroad.

“He’s the country’s best ever player” are the words of Benin’s national team manager Manuel Amoros. And most agree. The little attacking midfielder, who is also effectual on the flanks, has been a revelation for the Black Cats since joining from PSG in January 2011, even more so this season. He’s simply a joy to watch, packed with creativity, flair, tricks, speed and goals. Whether he’s gliding past a defender and looking to form an opportunity or controlling things in midfield, Sessegnon is always there and is a firm regular in Martin O’Neill’s rejuvenated Sunderland outfit. Seven goals and nine assists in 27 matches for his side this season, impressive stuff.

The 34-year-old veteran had to be included. He’s the master of the centre forward role, the ultimate striker. He injects fear into defenders, with his power, strength and superbly brutal volleys – recently showcased against Tottenham in the FA Cup last weekend. His records speak for himself, with Chelsea he has played 221 times and netted times. Meanwhile, for his national team, he’s appeared 84 times and converted 54 goals. When presented with a chance, you know there will only be one outcome. Although some people are saying Drogba should move on and his time is up, we all know, deep down, he’s Chelsea through and through and his forward play will always live long in our memories.

Now, this was a tough one to call. Cisse or Ba? I’ve gone with Cisse, just. For me, he just edges it as his influence on the Magpies since his January move from German side Freiburg has been pretty sensational, scoring 10 goals already including a beauty on his debut against Aston Villa. If the prolific frontman would’ve been assigned in the summer, I reckon he would have got more than Ba by now as his movement, finishing and link up play (especially with the in-form Ben Arfa) is lethal. He looks like a real snippet at £10m, too, if you like at the likes of Andy Carroll of £35m and Fernando Torres of £50m. In terms of Senegal caps and goals, Cisse has 17 and 11. And he could well be playing Europa League football next season with Newcastle, too, if the side keep up their brilliant form domestically.

Wigan’s main attacking threat. Moses, 21sc, has made the breakthrough into the first team this season and has not disapointed, chipping in with four goals and six assists. Known for his blistering pace in which he can use effectively on either flank.

Oh how City will be regretting sending him out on loan to Spurs this season. The former Arsenal hitman has netted 14 times and made 11 assists this term, and no doubt Harry Redknapp will be looking to snap him up in the summer. A poor man’s Dider Drogba but still a handful for defenders.

Arsene Wenger says Gervinho was the best buy of the summer 2011. A big statement, but of course he would say that. Signed from Lille in the summer, the winger has made a decent start to his first ever Premier League season, bagging four goals and eight assists. Often found cutting inside from the left causing chaos. Whether he’s performed to the standards of ‘best buy of the summer’ is questionable, but good impact player nonetheless.

The speedy left back, who joined Rangers from Arsenal in the summer, has made 19 appearances this season and contributed with 2 assists. Usually bombing it down the left looking to cross, or helping out at the back (defensively not that sound). Now plays as back-up to Taye Taiwo at Loftus Road.

The 6ft 2 striker, signed from West Ham United on a free transfer in the summer, has shone under Alan Pardrew and earlier in the campaign was on fire, netting a fine hat-trick at Stoke, breaking all sorts of records and helping his team sustain a top four position, something they are searching for now. 16 goals this season in 29 appearances.

*All stats and figures from Wikipedia

Any comments/suggestions are welcome.