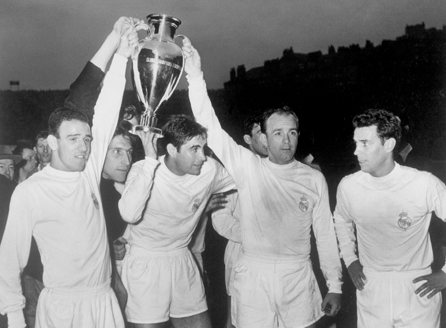 On Tuesday night, Barcelona extended their perfect start to their 2012/2013 campaign by comfortably seeing off the challenge of Benfica in Lisbon. It was a night overshadowed by a nasty looking injury suffered by Catalan’s skipper, Carlos Puyol. Whilst Benfica offered plenty of attacking threat, a professional performance from the La Liga leaders was enough to leave Portugal with three points in the bag.

Yet the spectacle at Estádio da Luz was nothing in comparison to the game played between the two European giants at Wankdorf Stadium in Switzerland in 1961 – the European Cup Final.

The game was of great significance as it ended Real Madrid’s five year hold on the trophy, who had dominated in the late 1950’s withthe mesmerizing talents Alfredo Di Stéfano, Francisco Gento and Ferenc Puskás taking opposition defences apart. Barcelona had knocked out Los Blancos in the first round, courtesy of a 5-4 aggregate win, which sparked huge celebrations amongst the Catalans.

Benfica became the first Portugese side to reach the final of the competition. The outfit were assembled by the Hungarian manager, Beta Guttmann who had only taken over the side a year earlier, after masterminding FC Porto’s title win in 1959 ahead of the Eagles. On joining Benfica, he sacked 20 senior players and promoted players from the youth setup.

They eased through the tournament putting aside the likes of Hearts, AGF and Rapid Wien on their way. The side was filled with goal scoring talent, in particular José Águas and José Augusto de Almeida, who were of international pedigree. Águas was to pick up the golden boot at the end of the tournament after amassing 11 goals, only failing to score on one occasion for the reigning Portugese league champions.

Barcelona’s passage to the final was not so smooth. They met Hamburg in the semi-final where the two sides could not be split after two legs. Whilst in modern day football this would cause for a nerve jangling period of extra time and a potential penalty shoot-out, the two sides headed for a play-off to decide the victors. The Brazilian Evaristo scored the winning goal for Barca in Brussels to secure a 1-0 win and put the Catalan’s into their first ever European Cup Final.

Blessed with the tremendous attacking talent from Budapest, Rio de Janeiro and Galicia, they boasted László Kubala, a Hungarian born Spanish international, who was voted in 1999 as the greatest player in the club’s history. He was an attacking playmaker, who had the ability to beat men at ease, create chances for teammates and strike goals with his powerful, yet precise finishing.

As well as Sándor Kocsis and Zoltán Czibor, who Kubala persuaded to join after the Hungarian Uprising of 1956, Barca possessed El Arquitecto (‘the Architect’) from Galicia – Luis Suarez. Regarded as one of the greatest players in Spanish history, Suarez possessed extraordinary technical ability and vision, chipping in with crucial goals from an inside forward role. He picked up the coveted Ballon d’Or in 1960, a feat which has not been matched since by a Spaniard. The 1961 final was to be his last match for the Catalan, as due to financial problems resulting from the building of the new stadium, he was to be sold to Inter Milan to become the world’s most expensive footballer.

And so to the final itself…

The two sides travelled to Bern, Switzerland, at the time the home of Swiss club, Young Boys. The stadium has since been demolished and replaced by the Stade de Suisse, which hosted games during Euro 2008.

Barcelona were touted as comfortable favourites for the clash in spite of Benfica’s wonderful route to the final. In fact, allegedly one Spanish newspaper claimed that only one of Benfica’s players, Mário Coluna, would actually make it into the Barca line-up.

Barcelona begun the game like a house on fire, correlating with the predictions before the game that they would dominate. The pressure paid off in the 20th minute when Suarez crossed in for Hungarian, Koscis to powerfully head home. Blaugrana could easily have been out of sight and put the game to bed shortly after if it hadn’t have been for the incredible saves being pulled off by Benfica goalkeeper, Alberto da Costa Pereira.

Yet ten minutes later, in the space of two unforgettable minutes of football, the game was flipped on its head. After the game had been played exactly to script, Benfica did the unthinkable. Barcelona veteran shot stopper, Antoni Ramallets became the villain of the show. In the 30th minute, Coluna delivered an incisive through ball to Domiciano Cavém on the edge of the penality area.            Ramallets, in an illogical move, darted towards Cavém, who was able to lay off the ball to the prolific Águas, to fire the ball into to the deserted goal, his eleventh goal of the tournament.

Things got much worse for Ramallets and Barca only a minute later. A seemingly harmless ball was served into the box, for the right back Foncho to head clear. However, Foncho was unable to deal with the delivery, and off balance he skewed the ball off his head towards the far post. Seemingly blinded by the late afternoon sun, Ramallets was hapless as he flapped at the ball and was unable to prevent it from looping over the line. Barcelona were stunned.

Whilst Barcelona did have a great opportunity to equalise deep into first half, where Mário João managed to use his torso to prevent Koscis from heading a second on the line, Benfica had the wind in the sails and continued to dominate. Barca escaped down the tunnel with their tails between their legs, after an unbelievable passage of play.

Benfica returned for the second half and continued the form they had shown in the back half of the first period. They received just reward for their work just ten minutes after the restart, when Coluna showed superb technique, precision and power to fire home a sublime volley from the just outside the penalty arc. O Monstro Sagrado (‘The Sacred Monster’) had lived up to the pregame hype in the Spanish papers and delivered on the biggest stage. Surely his goal was to be enough to seal a historic win and become only the second European Cup winners.

However, the Catalan’s showed great spirit and tried to fight their way out of the massive hole they had found themselves in. Koscis missed an open goal after a mix up between the defence, and Kubala, who was showing signs of real class, had a shot which was ruled not to have crossed the line. With the lack of camera angles it is difficult to see whether a goal should have been ruled, yet the English commentator, Tony Jones certainly thought it had crossed the line!

Yet with 15 minutes to go they were rewarded for their work. Zoltán Czibor hit a phenomenal left footed volley from range to put Barca back in contention. Barcelona continued to overload the box but a combination of stupendous saves from Pereira, the frame of the goal and some poor finishing from the Catalans, meant that the Eagles just held on. It was a brilliant spectacle and a fitting game to bring to an end the European reign of Real Madrid.

Benfica were to become a dominant force on the European stage for the majority of the 1960’s as they reached a further four finals in that decade, winning one more trophy in 1962. It became a period symbolised by the dominance of Brazilian, Eusébio. However, for Barcelona, it would take them over 30 years to land the European Cup, securing their first crown at Wembley in 1992.