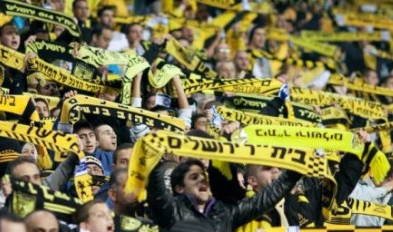 Football is a sport that unites and divides, a sport that takes you to the highest emotional level before dumping you to depths of despair.  Football is the beautiful game; but it also attracts some of the vilest and most obnoxious members of society.

The issue of racism has not been far from the headlines in the past couple of seasons; but in truth racism is a global problem that has always been there and which too often is conveniently ignored.

The arrival of two Chechen Muslim players at Beitar Jerusalem shows that racism is alive and well and a problem that the Israeli authorities and Beitar as a club need to resolve with utmost speed.

Most Beitar Jerusalem supporters have roots in Arab Muslim countries. They tend to belong to the lower and middle class and politically are nationalistic and right wing.

For a small, but significant hardcore element of Beitar supporters, known as ‘La Familia’, the presence of Arab or Muslims at their club is an anathema and one that they regard as unacceptable. They have protested by hurling abuse and racist insults not only at the two Chechen players, but also at members of the club’s management.

The burning down of the club’s trophy room was the final straw as far as the authorities were concerned. In recent weeks the police have made numerous arrests in an attempt to reign in some of the perpetrators of these incidents and there has been plenty of soul searching among Israelis who find such racist outpourings particularly uncomfortable.

For regular supporters of Beitar Jerusalem, the ‘La Familia’ ultras are regarded as embarrassment, with influence far outweighing their numbers. Ordinary Beitar supporters say that if a player is good enough to play for the club, then regardless of colour, race or religion they are welcome at the club.

When 19 year old Dzhabrail Kadiyev came on as a second half substitute for Beitar in their recent match against the Israeli Arab team from Bnei Sachnin, there were loud cheers for the young Chechen, not only from the home fans, but also from the Bnei Sachnin’s supporters. Sadly the cheers could not drown out by the jeers and boos from the racist elements in the crowd, each time Kadiyev touched the ball.

Whilst Beitar Jerusalem’s ultras are an example of intolerance and hatred; Hapoel Tel Aviv shows the positive side of Israeli football and an example of how football can help to bring people together.

Through a scheme called Mifalot, the left wing Hapoel club has helped bring together in excess of 20,000 children annually from Israel, Palestine and Jordan, since 1997. In recent years its international initiatives have also helped deprived children in a number of third world countries, including Cameroon, Rwanda and Haiti.

Arab footballers in Israel have had considerable success, with many representing the Israeli national team.  Beram Kayal, who is currently playing for Glasgow Celtic in the Scottish Premier League gave an interview to the Guardian and said, “I play for the national team. Sometimes people say I’m Jewish. No – I’m Arabic. Sometimes people on the outside can’t understand the bigger picture. They ask how Jewish and Arabic people can live together. But it’s fine, I lived there [in Israel] and I enjoyed it, and I get on with the people there.

“I have friends who are Jewish and, while I don’t want to go too deep into politics, it shouldn’t really matter in sport about Arabs or Jews – if someone says ‘Beram Kayal is an Israeli player’, then that is enough for me.

“Everyone in Israel is happy for me. I am Arabic which is the minority compared to Jewish people in Israel. The Arabic and the Jewish people are happy because I have more friends who are Jewish, I live with Jews and I play in the Israeli team with Jewish people.”

Meanwhile, the Peres Center for Peace founded by current Israeli President, Shimon Peres in 1996, has worked on schemes to bring greater understanding between Israel and Palestinians.  These schemes have often included high profile football matches where joint Israel-Palestinian teams have played against leading European club sides.

In recent days, Barcelona president Sandro Rosell has suggested a peace match between a joint Israel-Palestine and Barcelona should take place at the end of July.

Both sides have welcomed the idea, but Jibril Rajoub President of the Palestinian Football Federation said that at this time there are too many obstacles at present adding, “This idea would cause a quake in the region if it were to take place.”

Maybe it is too much to expect football to be a catalyst for coexistence between Israel and its Palestinian and Arab neighbours; but if it can help to reduce the tensions even and bring ordinary people together, then it has to be a move in the right direction.

Adam Robinson is a sports blogger based in Israel who writes about European and international sports as well as the top stories from his country of residence.

6 thoughts on “Beitar Jerusalem and the ugly face of racism”