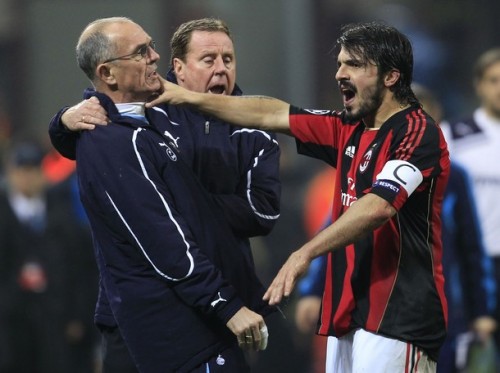 “Nobody wants to see that.”

The words of Sky Sports’ Jeff Stelling there, following the quote-unquote “ugly” scenes that took place in the San Siro on February 15th which saw AC Milan’s Gennaro Gattuso square up to Tottenham assistant manager Joe Jordan. While the match itself was far from dull, it was the kind of flashpoint pull-apart that lights up mobile phones and message boards.

The incident took place mid-game only for it to reignite after the final whistle, which prompted Sky’s television director to quickly return to the studio so that Stelling could condemn the fracas and speak on behalf of the entire audience. At least until old chum Harry Redknapp showed up and everyone agreed that Jordan could take Gattuso in a fight.

Sky’s faux-repulsion was in stark contrast to their treatment of the massive pitch brawl that occurred between League Two’s Macclesfield Town and Wycombe Wanderers a couple of weeks later. Not only was footage of the mayhem shown but the reporters adopted a mocking tone and chuckled their way through the report. The entire thing was regarded with such frivolity it was surprising the footage wasn’t sped up and the Benny Hill music applied.

Alas the issue here is not Sky’s hypocrisy but rather their unquestionable assertion that football fans do not want to see the other side of the beautiful game. While only the deeply troubled would wish to see a football match resemble a battlefield, there is an argument that football is quickly becoming a non-contact sport. An argument further reinforced by FIFA’s recent decision to ban the oh-so-dangerous snood.

While there are aspects of this to be applauded – clamping down on off the ground two-footed tackles for one, the constant whistle-blowing for otherwise innocuous fouls can threaten to make the game anaemic. Granted, sometimes there is no other option but for the man in black to repeatedly put his whistle to his lips and reach for his cards (Holland’s genius tactic of kicking Spain off the park in last year’s World Cup final comes to mind) but surely there’s room for some leeway?

Players need to be protected, that much is certain, but conflict has always been a part of football. To deny this is to reduce the game to black and white terms and spit in the face of the subtext thrown up by a heated clash.

Often the deep-rooted animosity between teams can overshadow their match, but this usually throws up an incredible atmosphere. Switching between the games on offer on March 2nd resulted in a telling contrast. On one channel we had the FA Cup fifth round replay between Arsenal and Leyton Orient at the Emirates Stadium in a conclusion so foregone that even Nicklas Bendtner treated himself to a hat trick while the fans sat on their hands, utterly nonplussed by the evening’s events.

A far juicier encounter took place but a channel away in the form of Celtic VS Rangers.  The Old Firm clash is always a spectacle, but rarely for footballing reasons. This match was no exception boasting three red cards for the men wearing blue and a quite astonishing touchline flare-up between Celtic manager Neil Lennon and the heir to the Rangers throne, Ally McCoist.

The sheer difference in volume when switching between the games was night and day. While Arsenal rolling over League One opposition at home was never going to incite the fans to nearly riot like only a Celtic/Rangers evening encounter can, the atmosphere at Celtic Park was something to behold.

The ironic thing about the fallout from that game which saw the Scottish Government step in is that if you take away the deep-rooted hatred between both teams then you don’t really have much to write home about. Their rivalry is regularly marred by abhorrent behaviour from certain sections of both sets of fans to the point that football itself is being forgotten, but their on-pitch clashes result in an unrivalled atmosphere.

The old cliché is that “anything can happen in 90 minutes”. This applies to every aspect of the game, from a stunning match-winning goal to the kind of injury that can ruin a player’s career, but even the latter example can inspire and influence.

Consider that Arsenal have seen major dramatic shifts in momentum in recent times directly influenced by horrific injuries to members of their squad. Eduardo’s leg break in 2008 proved the catalyst for their capitulation (and the self-imposed career suicide of William Gallas) while a similar injury to Aaron Ramsey two years later saw the Gunners solidify and use their newfound spirit to win a match that previously looked unlikely.

In the case of both incidents, replays were not offered by the cameras. Once again Sky “protected” their audience. This of course did not stop viewers seeking the images out through alternative means – if anything it placed an even stronger emphasis on them due to the censorship. These were not throwaway moments, but moments that unquestionably changed the respective matches and in one case, the entire season. And yet we were spared the emotional turmoil.

I’d argue that we handle the gruesome imagery. Nobody wishes to promote or condone violence or even go as far as to wish injury on a player (although as a Manchester United fan I find Michael Carrick is increasingly testing my resolve, but I digress). Football is the beautiful game, but there are flaws in the prettiest of things. Conflict is drama. Nobody is asking for the camera to linger or to make light of a horrible moment, but to edit it out altogether is to remove context, passion and raw emotion from the game we love so much.