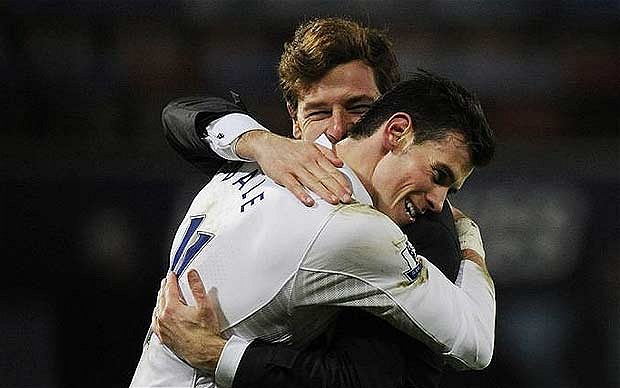 When Harry Redknapp mischievously taunted the struggling André Villas-Boas last September, in declaring that Spurs should easily finish in the top four, few saw it being that simple for the Portuguese.

After all, on many levels, it seemed a dangerous prediction.

Tottenham were displaying the worrying defensive lapses and lack of cohesion that Villas-Boas’ time at Chelsea was synonymous for.

Then, supposedly influenced by Steve Bould’s promotion, Arsenal looked to have the steel that they so badly lacked in previous seasons to maintain a consistent campaign.

It is amazing how perceptions can change in just seven months – the same amount of time that Villas-Boas spent in his disappointing spell as Chelsea manager in 2011/2012.

Then, Villas-Boas was lambasted for his stiltedness, his tactical pretentiousness, his insistence that his players celebrate with him and his embarrassing paranoia regarding the press.

It seemed that while Villas-Boas could build a siege mentality much like José Mourinho, poor results and strained relations confirmed something of an inferiority complex for Villas-Boas – accentuated by the Portuguese not even making it as a semi-professional footballer.

Now, however, the enthusiasm, self-belief and intelligence that made him such a leftfield, refreshing appointment ahead of Guus Hiddink by Abramovich has returned.

It says a lot about the job that Villas-Boas has done at Tottenham that, for many, his time at Chelsea is not being viewed as an abject failure – regarding communication, Champions League disappointment and 47.50% win percentage – but as a project that would, eventually, have taken off.

This may seem a remarkable statement to make, given the fact that had Villas-Boas stayed on, desperate morale and questionable decisions – including dropping the likes of Frank Lampard and Ashley Cole – would surely have made a Champions League rally incredibly difficult.

Admittedly, Chelsea looked to have been in a downward spiral under Villas-Boas but twelve months on, are they any better from that landmark Champions League win regarding philosophy and managerial sustainability?

Still, the contrasts between the two eras are stark.

Villas-Boas’ poor handling of Alex, Nicolas Anelka and Lampard versus his respect for Brad Friedel and Michael Dawson and continuing to involve the likes of Gylfi Sigurðsson – even when they go through a crisis of form.

And finally, and most importantly, Villas-Boas has the perfectly aged raw materials and hierarchical backing to work with, having not had the chance to bring in the crucial sweeper ‘keeper, Rui Patricio, at Chelsea and with 10 of the 23 players he used at Chelsea by January, 2012 being aged 30 or over.

It has meant that a mouldable dressing-room has wholeheartedly bought into Villas-Boas project, reflected in the incessant pressing and hunger of Villas-Boas’ Tottenham.

Unlike at Chelsea, too, Villas-Boas’ overnight stays at the training ground and obligation to peer through the curtains to monitor players’ arrival times have not been so necessary.

Also, the atmosphere and support of fans at White Hart Lane has rarely been so raucous: perhaps an unsurprising result of Tottenham going 12 games unbeaten in the Premier League for the first time in their history, on 3 March. 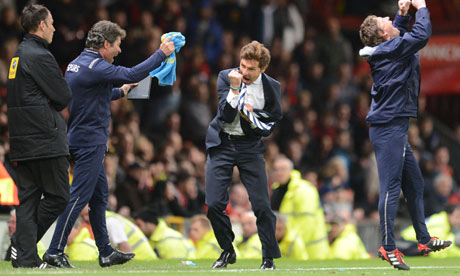 It is clear that following the breakthrough of the 2-3 over Manchester United on 29 September, 2012, there has been tangible evolution at White Hart Lane and Tottenham are one of the form sides in Europe.

A seven-point cushion in the race for the Champions League places, with just nine matches to play, means Villas-Boas could be well-placed to target becoming the only the second manager to win the Europa League with two different clubs, too.

Naturally, with ten goals in his past ten games, Gareth Bale is the perfect encapsulation of this brilliant run of form for Spurs.

However, to suggest that Tottenham are too reliant on Bale and that Villas-Boas has issued Bale the audacious, schoolboy tactical freedom that Redknapp afforded him would be foolhardy.

In truth, Villas-Boas has elevated Bale’s game further than Redknapp: refining the free role that Bale relishes, by restricting it to between the lines of the final third – as opposed to the self-indulgent marauding that was once a staple of Bale’s game throughout the pitch.

Bale has certainly recognised this influence, evident in his touchline embrace with Villas-Boas against West Ham on 25 February and the far from coincidental AVB initials for his newly-born baby girl, Alba Violet.

If Tottenham go on to make the Champions League and hold on to Bale, it would be intriguing to see Villas-Boas build on that achievement.

After all, for a manager who has become synonymous with the word project, ironically, Villas-Boas has never spent more than a season at one of the four teams he has previously managed.

Clearly, though, something special is in the offing for Tottenham and if, presumably, Daniel Levy affords more control to Villas-Boas now that he has proven himself, Tottenham would certainly progress to the next level.

After all, as a former opposition scout, one of Villas-Boas’ key managerial elements is the ability to spot potential and brilliance in a player.

Admittedly, that may not seem difficult with names like João Moutinho or Leonardo Damião, but the signings of Oriol Romeu and Juan Mata at Chelsea were driven by Villas-Boas and it was no coincidence that they adjusted to the rigours of English football so seamlessly under the Portuguese.

After all, it would be complacent for Tottenham to rest on their laurels after an impressive season and not strengthen in the summer.

It will prove key to Villas-Boas’ prophecy, having declared that the Tottenham could eventually challenge for the title in his unveiling to the media on 12 July.

At the time, it seemed that the Portuguese had learnt little from his naivety regarding media relations at Chelsea; now, Villas-Boas could prove vindicated.