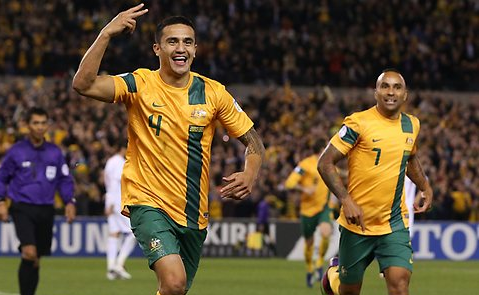 Well a 0-3 win against Canada. Well done lads, beating a team placed 106th in the world. It was a much needed confidence booster. Caretaker boos Aurelio Vidmar’s international managerial record goes: one game played, one win, three goals scored and none conceded. Potential contender for the hot seat? Now moving on or should I say going back. Twelve goals conceded in two games against Brazil and France, no goals scored and Holger was on his bike.

It’s never nice to lose two games on the bounce. It’s never nice to concede six goals in a game and not score any either.  I can see the nation’s frustration. I can understand why you would be annoyed. If that was Ireland and we were on the end of those score-lines, I would be annoyed too.  Australia is a proud sporting nation. Drenched in sporting success, and with some of the most well-known athletes in the world, they pride themselves on success. But I think in relation to the football team or Socceroos, things need to be put into perspective and people need to take a look at the bigger picture.

You have qualified for the World Cup, the pinnacle of international football. All the best teams in the world will fight it out in Brazil to become champions of the world, and you will be one of those teams. Australia has only graced the World Cup three times previously, the last two coming at the previous two World Cups. Before that it was 1974. So, to qualify for the World Cup before the likes of England and Portugal is something to be proud of. Now people will say “well we had an easy group and competition this side of the world isn’t great”.  Well I disagree. Do you remember losing to footballing giants Jordan 2-1 in the qualifiers for the World Cup? Do you remember the score draw at home to the scintillating Oman? Oh, maybe you forgot about those results.

If I’m honest, I would be more disappointed with those results than losing to five time World Cup winners Brazil and former World Cup and two time European Championship winners France.  The team that France played against Australia consisted of eight players who start regularly for some of Europe’s best teams. On their bench they had a Real Madrid striker and a Liverpool center back to choose from. Brazil had one of the world’s best players in Neymar, a center back pair from Paris St Germain and Chelsea, a midfield duo from Spurs and Chelsea and a Real Madrid left back. Australia on the other hand are not so fortunate. Their captain, Lucas Neill, plays for Omiya-Ardija of Japan. He has barley played high standard football in the last three years and is too proud to step down and make room for someone else. They have one player playing for a top European team in goalkeeper Langerak, and he has on played two games this season. Tim Cahill is now plying his trade in the MLS with New York Red bulls and their midfield pair plays for Brisbane Roar and Crystal Palace. Now nothing against the Australia players or they teams who they play for, but if you seriously are shocked at loosing heavily to France and Brazil with a squad like that well then in their lies the problem. Expectations are too high. Way too high.

The sacking of Holger Osieck was harsh. Managing Australia 44 times, he had a win percentage of 52.27. Guus Hiddink managed the Socceroos only 13 times and had a win percentage of 66.54. Would he have done as good in 44 games with the squad at Osiecks disposal? Everyone harps on about how well Guss did. Well compare both squads. Hiddink had seven players who played in the Premier League. He had Vidka at Boro, Kewell at Liverpool, Cahill at Everton, Neill at Blackburn at Moore at Newcastle to name but a few. Two of the squad played for Parma, one for Alaves in La Liga and one for PSV Eindhoven. As I mentioned before, Osieck has one player in a European top team and he isn’t even playing. One player playing in relegation favourites Crystal Palace and another player in the Qatari league.  The current squad is very poor. Not near the level of the 2006 one that went to the World Cup.

Who else could Osieck pick? What players did he leave out that should have been in the squad? Harry Kewell? Some will say Tommy Rogic. Well so far playing in a poor Celtic team and a very average league, Rogic has made two starts. You can’t pin your hopes on the shoulders of a 20 year old not playing for Celtic.  Osieck picked the best squad he could. He played the hand that was dealt to him as they say. Now the argument will crop up about not the score line but the manner in which Australia lost those two games. Just recently in the Sydney Morning Herald, journalist Sebastian Hasset asked is the style of play important or is it just the result. He followed that question with “Osieck failed to create a style of play that would allow the Socceroos to break down superior teams in attack while keeping them at bay in defence.”  Well firstly it’s a results business. Win win win.

It doesn’t matter how you play once you win or achieve your objective. Osieck’s objective was to reach the World Cup and he did. Well done Holger. Now in terms of not creating a style of play, with top players you can create a style of play. You can play anyway you like. You can rip teams apart or shut up shop. But with the current Aussie squad, it is impossible to break down a superior team. Even if you had Pep Guardiola as manager, breaking down a superior team with this current squad would be very hard. Again, nothing against the players or the clubs they play for. All good players in their own right, but like my country Ireland, expectations for results and player capabilities are too high. Even Aussie legend, Mark Bosnich, agrees and foresaw the sacking of the German. In a recent interview he said “A lot of us have seen this coming for quite some time. I think he’s only part of the problem. Holger Osieck got the sack on the weekend and I was one of the ones that thought that Holger deserved to go to the World Cup because he qualified us for the World Cup.” Listen to Bozza. He speaks the truth, the whole truth and nothing but the truth. Ok, well expect for thinking that Sir Alex should be the man to bring Australia to the World Cup. That’s a bit far-fetched but he does recognise the decline in his countries quality and agrees that the sacking of Osieck was unfair given he got the Socceroos to the World Cup. Judge him at the tournament and see how they fare. Then sack him or do what you like.

If I’m honest both results against France and Brazil haven’t really shocked the football world. It’s not like England lost 6-0 to Kenya. That would shock the world. It wasn’t expected and conceding six goals is bad. But it has just highlighted the lack of quality in the team. Brazil are not the Brazil of old and neither are France. Australia didn’t face an unbeatable team. But Brazil and France faced a very beatable team. Brazil and France faced a team lacking any strength on the bench and quality going forward. Brazil and France faced a team with no quality players, an ageing captain and a poor youth system. Whoever comes in, whether it is Guus, Graham Arnold, Tony Popovic, Ange Postecoglou or even Julia Gillard, they will have a massive job on their hands. They will have to tear the current side apart and build from scratch. They will have to rely heavily on younger players and invest more at grass roots. The FFA will need to give the new gaffer time, a lot of time, because turning this ship around will take a few years. The Socceroo fans will need to have patience too. They will need to support their team and manager and not set expectations too high. Results like that against France and Brazil may happen again but that should not deter them from facing top sides. They only way to get a true measure of your team is by playing against the best. There is no point paying lesser teams because it gives you a false sense of security. It’s too hard to judge how well you are doing playing against such poor teams.

It doesn’t really matter if you put an Aussie in charge, short term or long term. Whoever goes in has a massive job on their hands. Australia has squeezed every ounce of talent out of the Golden Generation since 2006 and now is time to move on. The World Cup is around the corner and there are two ways the Socceroos can approach it. They can play the youngsters of the squad in the tournament and give them big tournament experience. Find out if they can handle it. It may mean being the whipping boys of the tournament, but it will be short term pain for the long term gain. They will find out who is up for it and who isn’t. The other option is to go to Rio, have some sort of a defensive game plan and hope for the best. That’s it really. There’s nothing else you can do is there besides place your hands over your eyes, don’t look and hope for the best.