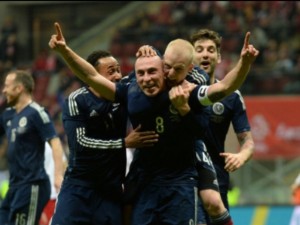 “We need the three points; we have to go for this.”

But what does going for it really mean for a smaller nation like Scotland? Should we go for it at all? The benefits and pitfalls of giving up on conservation and adopting an attacking style are hotly debated up and down the country. It can be a highly dangerous approach when you do not have the resources to cope with the other team’s reply. Conversely, it can help solve a great Scottish problem – the need for goals.

The recent victory in Warsaw has highlighted the upturn in Scottish fortunes since Strachan took charge. Scott Brown’s latest in an ever-expanding collection of winning goals for the national side was enough to secure the win, but the performance was certainly not dominant and arguably was not even deserved of a triumph.  We were hardly on the front foot.

However, the aspect of greatest importance is the result. Surely after so many years of qualification heartache the fans will allow results to be put ahead of style: maybe they do not have to. Passing reminiscent of many a top European side has been witnessed on the floodlit Hampden turf regularly over the past year, with a distinctly positive change in results accompanying it.

Significantly, two recognised strikers dawned the navy blue shirt from the start against the Poles, even if it was in the 4-2-3-1 formation so adored by modern coaches. Fletcher (Steven, of course) and McCormack worked hard without being massively effective. That being said, we largely matched Poland in an encounter barely blessed with chances; creating a few chances of our own.

Ikechi Anya also started for Scotland. The latest in a string of inspired selections by Strachan, he has proven in a limited sample of games that he truly has an abundance of international quality. Obviously as a winger he is required to perform his share of defensive duties, but he is an extremely attack-minded player famed for bursts down the wing and an excellent final ball.

On the whole it was an attacking line up. We reaped the rewards – and we have done so in the past.

Two examples are unfortunately heroic failures. Narrow defeats that should have been that for the opposition. Let’s look back to last year.

Wembley. Yes, in a boxing ring atmosphere we lost out 3-2, but this was different. It was a defeat filled with not only regret but a bizarre satisfaction. England were made to look the pub team we Scots are so often brandished as. Strachan inspired a positivity in the players that had simply not been there before.

Right from the off we were pressing; winning the loose balls, scoring the odd goal. It was magical, a spirited but ultimately attacking performance had shown our undeniable quality. We were undone by set-pieces, but it couldn’t detract from what Scotland displayed.

We twice went ahead through West Brom’s James Morrison and the now internationally retired Kenny Miller. It was an exhibition of our potential to challenge the big boys of the international game – though how big a boy England actually are will be well and truly challenged in the rainforests this Summer- and the “going for it” approach was key.

The same evidently beneficial effects of the approach were clear for all to see against Spain as well. The Scots valiantly fought back from 2-0 down to once again be pipped 3-2. Offensive talent and work rate were key in the tight scoreline against no other but the world and European champions. Rather surprisingly it was Craig Levein this time who inspired the players to such a rousing exhibition. Don’t think I am praising him in the slightest; I never will.

So will this attacking style be the way to go in the qualification process for Euro 2016? I don’t see why not. Clearly Germany can be subtracted from the equation of possible victories, but all the other teams are there for the taking. They certainly are not renowned for their defences. And we have one which can cope with the added pressure placed on them by an offensive approach. Clean sheets are rapidly becoming somewhat of a Scottish forte.

Ireland are sitting lowly, mirroring their confidence, in the rankings. A recent home defeat to Serbia has knocked then further, and although international football is a fickle proposition they are unlikely to receive as major a boost as Scotland already have done before the two meet. They are there for the taking.

Georgia do not look to be in such great shape either. Boasting an unheard of selection of players, the nation who killed off our hopes all those years ago when we rivalled the French and Italians for a place at Euro 2008, have a rather bland and blundering defensive line-up. They are also there for the taking.

Gibraltar have a defender called Danny Higginbotham; he is retired from club football. The entire population can fit inside their borrowed Portuguese stadium they are expected to use for their home matches during the campaign. Without meaning to sound disrespect: they are there for the taking. And then some.

The manner in which the Scots conducted themselves in Poland shows the Poles are fallible. We defeated them by defending expertly but having the zeal and spirit going forward that we should be prided on. It is what appears to get us the wins which are immeasurably important to us. Poland are there for the taking.

An attacking mindset seems to be the perfect one for Scotland. Our quality on and off the ball under Strachan looks like it could match almost any system of play, but past games have shown the Scots are at their glorious best when focusing on offensive endeavours. There is a vital point to remember though: your style and system is only as good as your players. Currently our style seems not too shabby at all.

One thought on “Attack vs. defence: the eternal Scottish quandary”