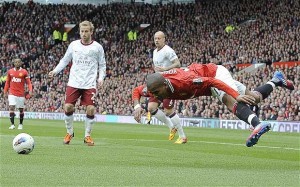 In Manchester United’s increasingly underwhelming start to life under David Moyes, it’s hard to work out which aspect to post-Fergie life has been most disappointing. Whether watching Moyes try and squeeze some creative juice from a midfield duo of Tom Cleverley and Phil Jones or seeing Wayne Rooney single-handedly lead the reigning Champions’ front-line as Robin van Persie debates when to hand in his inevitable transfer request, Manchester United in 2013/14 have been the dictionary definition of “second-rate”.

Indeed, only Rooney can come out of United’s early-season run with any credit, having scored eight of the Reds’ 22 Premier League goals so far and performing like the leading striker England have missed since the 2006 World Cup. The rest of United’s squad are facing searching questions from the English media, questions like “are Ferdinand & Vidic too old for the top flight?” to “has Danny Welbeck ever been good enough, I mean, really?”.

How fortunate then that Ashley Young has volunteered himself as United’s human shield, throwing himself in front of the collective red and white body to take the sharply-questioned bullet and deflect attention away from another underwhelming Manchester United performance against Shakhtar Donetsk (I apologise for how laboured that metaphor was, but it made sense in my initial notes).

Young, whose start against Shakhtar was his first in six weeks, was asked about his burgeoning reputation for “simulation” or, to give it it’s full and candid title, “cheating”. Young’s penchant for falling to the floor under no challenge, and his success rate in doing so against Crystal Palace, Real Sociedad and a myriad of others, had led many to question whether the 28-year-old was the industrious and honest winger that not very many had considered him to be.

The former Aston Villa man, to his credit, WAS honest in his response. He was unapologetic and said that, although he had been warned about diving by his current and previous managers, it was up to the referees to “make the decision, because they are the ones giving the free-kicks and penalties”.

And that is a very dangerous game for Young to play. Kudos to the United winger for being truthful, but he has been truthful to an extremely arrogant fault. Young has essentially challenged Premier League referees to “catch [him] if you can”; suggesting that, with the onus purely on referees to judge a dive from a legitimate foul, he can’t be blamed if he wins a penalty for a swan dive as he did against Real Sociedad.

His comments don’t just undermine Moyes, who publicly scolded Young in September for receiving a caution for simulation against Palace. Sir Alex Ferguson had a similar “word” with Young after the £16million man collapsed in a heap to win a penalty against Villa.

I’m sure popularity with the media, public or even his manager isn’t at the forefront of Young’s mind as he collects his six-figure income each week from the United HR department. But when it comes to winning friends and influencing people professionally, publicly challenging referees to spot his dives in such a manner surely isn’t the way to continue winning penalties.

Whenever Luis Suarez, Gareth Bale or Cristiano Ronaldo have committed high-profile flops, referees have responded in kind and judged each and every foul in the final third on whether or not the player in question went to ground easily. It’s much harder, despite what people may think, for Suarez or Bale to win a legitimate free-kick based on their past exploits; both in fact have been booked for being hacked down on more than one occasion.

But that is where Young differs from Suarez, Bale and Ronaldo. While the latter three have wriggled free from the “good-player-but-goes-down-too-easily” tag by virtue of their frankly astounding personal performances, Young is still not performing at the minimum level expected of a Manchester United winger. He is arguably behind Nani, Adnan Januzaj and Ryan Giggs at United and looks about as likely to get 90 minutes for United this season as Andy Carroll. His confidence may have taken a battering over the last year and he doesn’t look sharp or dangerous when on the ball, unless of course a defender sticks out a trailing leg.

His international future doesn’t look much better. Young has the ability to turn defences inside-out but as long as he continues to warm the bench in an exceedingly poor Manchester United side, he won’t be warming a seat on the plane to Brazil next summer. He isn’t creating the opportunities for himself that Suarez, Bale and Ronaldo have. I’m not suggesting that Young is on the same potential level as either of those three, but does he have the same level of desire to push himself to the absolute limit?

The biggest shame is that Young, whilst acknowledging that referees have a tough job, doesn’t realise that he’s only making life for officials tougher at a time when the consistency and capability of top-flight refs is constantly being monitored. Worst of all, by placing the blame at the feet of the referees, he tries to justify cheating and the kids who look up to him will continue mimicking their idol at grassroots level.

If Young is going to be remembered as anything other than a diving waste of potential, he needs to take responsibility for his actions and overcome the “flopper” tag, in the same way that Suarez, Ronaldo and Bale have. Otherwise, he’ll only be remembered as a bad way to blow £16million.