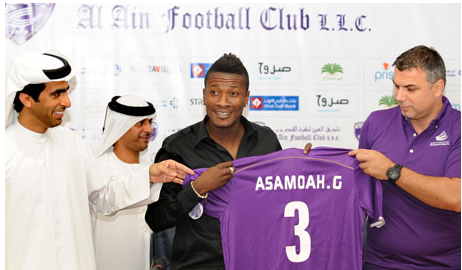 The season may be just four games old but Steve Bruce and Sunderland‘s season is already on a knife edge. Having lost Asamoah Gyan to Al-Ain in one of the strangest loan moves the English Premier League has ever seen, the Black Cats have lost their focal point up front and now face a long cold wait until the January Transfer Window opens up.

Last season Steve Bruce guided Sunderland to 10th place in the EPL, this despite his star striker, Darren Bent, leaving for Aston Villa in January for £18 million after putting in a transfer request. The sudden move by his main player left the Black Cats reeling and it came as no surprise to see them struggle and only win three games from 12 after Bent had left.

However, when the chips were down, and at one stage Sunderland really did look like relegation contenders, Asamoah Gyan popped up with some good performances and some more important goals to stave off the drop.

Gyan had joined for a club record £13 million from Renne in September after impressing during Ghana’s ill fated run during the World Cup and had initially struggled to adapt to the rigours of the Premier League.

Happy that the Ghanaian World Cup hero had stepped into the breach when he was needed most, Bruce happily consigned the 2010-11 season to memory and immediately set about rebuilding his team for an assault on European football in 2012.

Backed by the Chairmanship of Niall Quinn and the money of American Ellis Short, Bruce tore into the transfer market as soon as it had opened in June and immediately set about building his new look team around his record signing.

Ahmed Elmohamady was snapped up on a permanent deal following his impressive loan period and was joined by fellow wide players Sebastian Larrson, James McLean and David Vaughan as Bruce looked to inject penetration and pace into a new look 4-5-1 formation.

In came Wes Brown, John O’Shea and Craig Gardener to shore up the gaps through central midfield and central defence while Conor Wickham, Ji Dong-Won and the much maligned Nicklas Bendtner were all brought in to back Gyan up and to offer different options.

Optimism was at an all time high at the Stadium of Light after spending almost £20 million on strengthening the squad with many tipping Sunderland to push the established EPL teams all the way for Europe.

However, the wheels started to come off almost as soon as the Black Cats lost their first game of the season against fierce rivals Newcastle United. A shock defeat to Brighton in the Carling Cup followed before a 0-0 draw against Swansea in Wales preceded a poor performance and home defeat to Chelsea.

The big news going into the Chelsea game though was the shock loan move of Asamoah Gyan to Al-Ain in the UAE after the striker forced the deal to go through. The move came as a complete shock to Bruce and Sunderland especially as the striker had just celebrated one year at the club following his £13 million transfer last summer.

The day before the Chelsea match and the subsequent transfer Bruce had actually gone public to quell the fears of Black Cats fans;

We have had a discussion with him and he needs now to focus and get himself back on track again and be the Asamoah Gyan we know he is capable of.

These things affect these players, and it has affected Asa.

I had a conversation with him two days ago to say, ‘Look, the window as now closed, Asa. Right, we need to see you back playing again and back the way you know you can play’.

Bruce obviously felt the matter was closed but just 24 hours later he was back out to tell the media that Gyan had left the club on a season long loan deal. Not wanting to have a player whose mind was elsewhere and who did not want to play for the club, Bruce reluctantly agreed to let the Ghanaian join Al-Ain. It must be said though that Sunderland is earning a staggering £6 million from the loan fee alone.

I had a conversation with him 48 hours ago and he shook my hand and assured me he wanted to stay at Sunderland.

Within a few hours things changed. It’s disappointing and the whole thing has left a bad taste in my mouth.

It baffles me how he can leave the best league in the world to play in the United Arab Emirates. I’ll let people make their own conclusions why.

Bruce had earlier claimed that following Gyan’s impressive display against England in March that his striker had been turned by “parasites” who wanted to earn money by engineering a transfer away from Sunderland for the player.

Speaking on the deal, Niall Quinn shed some light on the saga:

Steve Bruce, our owner and the board all found the football decision baffling, but I as chairman, with everyone’s full support, decided that this deal was in the best interests of our club.

Quinn has already given Bruce his full support and has said that the £6 million loan fee will be his to do with as he wishes come the January Transfer Window but that may come as too little too late for Black Cats fans.

As it stands, Bruce now only has three strikers to choose from at the Stadium of Light. One is an unknown entity, 20-year-old Ji Dong-Won, and in its 20 year history one two Asian players, Park Ji-Sung and Chung Yong-Lee, have flourished in the notoriously tough league and both needed time to settle.

While even though Nicklas Bendtner has played over 200 games across seven seasons, six with Arsenal and one on loan to Birmingham, he is still precocious plays like a player incapable of gaining experience at the highest level often making poor decisions during the course of a game.

That leaves 18-year-old prodigy Connor Wickham. The striker joined Bruce in an £8.1 million deal that caught the rest of the EPL by surprise. The England youth international had long been courted by both Arsenal and Tottenham Hotspur and was also on Damian Comolli’s radar at Liverpool.

In the end he chose Sunderland, presumably because he perhaps thought first team football would come quicker in the North East than in North London.

With Gyan in his team Bruce had the cushion of being able to carefully select when he blooded his two new recruits with Bendtner being the link between them all. However, with Gyan leaving all of Bruce’s tactical and philosophical plans has been realistically thrown in the bin.

There is now no two ways to look at it, but Bruce now has to start with Bendtner while rotating Wickham and Won.

This is less than ideal given the apprenticeship he had envisioned when he first signed the pair and now both players will be allowed to make mistakes and get away with them that otherwise they would not have as Bruce cannot drop or punish his players because he has no back up.

In the long run this could be severely detrimental to the development of both players but Wickham in particular because he had the previous option of joining a club where all his old faults and habits would be ironed out. Now with Sunderland in their current situation, Bruce simply does not have the time or the man power to iron out the undoubted creases that will show with time.

Speaking to the Sunderland Evening Echo Bruce had this to say on the duo;

We’ve had to look afresh at things in the wake of Asamoah leaving for the season.

My plan was to bed the young forwards Connor and Dong-won in slowly, build up their experience and confidence and then look to get the best out of them further down the line – we have to remember that they are only 18 and 20.

When you look at big talents in the Premier League who came into it young with big reputations, it has taken Theo Walcott to this stage to finally establish himself as a first-team regular while Gareth Bale also took a long time to settle in before we started seeing the best of him.

It’s the same with Connor and Ji – they’re still learning – and I hadn’t wanted them too exposed too soon because inevitably if they don’t play well there’s a danger they’ll get stick from the fans and that’s going to affect them and set them back.

Unfortunately in some ways, we are where we are in terms of perhaps having to draft them in earlier than we would have hoped, but we need everyone to get behind them and hopefully they’ll rise to the occasion.

Sunderland’s fans will have to show super human levels of patience as the season rolls on, not with Wickham or Won, but with the team in general. Having only taken two points from the opening four games, the Black Cats now embark upon a 15 game run, before the window opens, where they will be tested on every level.

At the beginning of the season the Black Cats, with European aspirations, would have hoped to take between 20 and 25 points from the 45 on offer. That points total would have put them on target to finish in the top eight as the season turned.

However with recent events they could now realistically take something between 14 and 18 points which would put them in line with a season long relegation battle. Their current run of form is abysmal, only fives wins from the last 22 and losing their main striker has done nothing to ease the pressure on both Bruce and Niall Quinn.

The international break could not have come at a better time for the beleaguered Black Cats boss and if he is to make a success of Sunderland’s season he is going to have to dig deep through the depths of his playing and managing experience.

In short, this will be a long, long season for Sunderland.

For more thoughts and views on Asamoah Gyan’s defection, check out this week’s podcast.