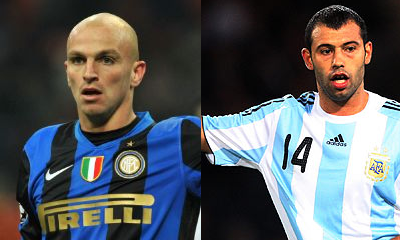 In Argentina, a player who covers the defensive midfield position just in front of the defenders, if he gains enough notoriety, becomes known as a ‘Pac-Man’.  This refers to the way certain players gobble up loose balls in midfield like life-sized Pac-Men chomping on the white dots.  The analogy falls a little flat when you add in colourful predator/prey ghost villains, but hey, it’s still good. Here are five of the best Pac-Men (or Pacmans as they are known in Argentina) in football at the moment.

Once hailed, perhaps prematurely, as the ‘new Redondo’, the Real Madrid player is a thinking man’s defensive midfielder.  He uses guile more than brawn to snuff out opposition attacks, and possesses considerable skills on the ball as well as a fine passing game.  This ex-Boca star had an average time with Madrid and lost his place in the national team last season, but keep in mind he is still only 23 years old, and has plenty of time to improve.

Following in the footsteps of Gago, this hard man with a timeless name is another Boca Juniors graduate who is now plying his trade in Spain.  Banega looks equally graceful whether he’s whisking the ball off opponents’ toes or pirouetting around them to launch an attack.  He was very unlucky to miss out on a spot in Argentina’s World Cup squad after a fine season with Valencia and should become even more of a dominating midfielder as he matures in the next couple of years.

The type of player that Gago and Banega can dream of becoming, ‘El Cuchu’ is a coach’s dream. Relying on rat cunning rather than physical intimidation, Cambiasso always seems to be in the right place to cut out a pass, hassle an opponent, or link an attack.  He even scores a few fine goals with some regularity. He may look like an unassuming IT consultant, but at heart he is still a midfielder warrior of the very highest class.

Already a star for the national team at U17 and U20 levels, this 19-year-old is so highly rated he has earned himself the same nickname as legendary hardman Diego Simeone, ‘El Cholo’ — and it’s easy to see why.  Zuculini may be pint-sized, but he makes up for a lack of height with the unerring commitment of a madman.  Displaying boundless energy as he tears about the field, he is both a destructive and creative force for his team.  After starring for that perennial talent factory, Racing Club in the 2008 Apertura, he made his foray into Europe last season with TSG Hoffenheim.  Don’t expect him to stick around long, though, as some of Europe’s bigger clubs are already expressing an interest in the youngster.

The Argentinian national team is “Mascherano plus ten” according to coach Diego Maradona. ‘El Diego’ may be a bit light on tactical nous, but even he can see how valuable the Liverpool midfielder is to a team. Like all great defensive players, Mascherano invests just the right amount of violence into a game, i.e. enough to not quite get himself sent off (well, usually). A rabid tackler with good positional sense, he snaps at attackers like a terrier. On the odd occasion that somebody gets past him, he is almost always nipping at their heels again before they can contemplate their next move. Also has the rare ability to herd opponents around the field like helpless sheep.  The world’s best Pac-Man — he’s even better than the little yellow guy with the big mouth.