The debate over Spain’s ‘tika-taka’ philosophy has raged in the aftermath of the World Cup Final and Neil O’Hara poses the question – is it football at its best or just plain boring? 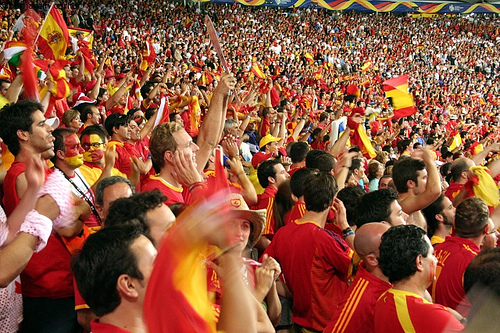 At times during this World Cup, the Spanish have reminded me of a jazz band. There is no doubting their sublime talents and technical skills, but they will never sell out a big venue because the majority of people seek out the “popular music” – flair football, high tempo games with lots of goalmouth chances. But are we short selling ourselves as soccer fans by defining high tempo football as “entertaining” and dismissing everything else as “boring”? The Spanish have elicited polarising opinions on their entertainment value during this World Cup. For every person who says that they play football the way it should be played, you will find another who will describe them as boring. For every person who lauds the “tika-taka” passing game as the purest form of team football there is, you will find another who will claim that they are merely passing the ball sideways hundreds of times and that they would prefer a good old end to end contest any day. Regardless of your own opinion, the fact is that nobody has been able to consistently find an answer to it for the past three seasons. There have been the odd blips, Switzerland’s victory in the group stages and the USA’s victory in the Confederations Cup last year come to mind, but the 10 out 10 wins in qualifying, their 35 game unbeaten record prior to the USA game, and their victories in the last two major tournaments showed that these games were the exception rather than the rule. The fact remains that, regardless of which side of the fence you are on in the “tika-taka as an entertainment spectacle” debate, it is an extremely successful formula, which leads to the question – is there too much emphasis put on entertaining football? Or do we need to redefine what entertaining football actually is?

In England, entertainment is defined as pass and rush football – fast paced, physical, direct and attacking minded. This is still the culture of football in the UK despite the growing popularity of a five man midfield and a switch to more defensive tactics. Traditionally there is very little time to do much else as a footballer in England, at a young age you either excel at the pass and rush style of football or you are seen as a luxury player. The game is based on hustle and bustle. This leads to an entertaining spectacle (we’re told) when English teams meet each other. The style is severely limited however, as is seen when the English struggle consistently against the continentals who seem to read the game better, control the game better and play more cohesively as a unit. It begs the question, is this unrelenting desire for entertainment causing the UK to produce players who are undoubtedly talented, but severely limited?

Take England at this World Cup as an example. We saw yet another campaign where England’s midfield came up a long way short of what you would expect given the reputations of the players. At times the Germans could have fit a small plane through their midfield without even a threat of a tackle coming their way. One of the main problems that English players have is that it is so ingrained in them to play this way that they seem to struggle to develop other aspects of their game. The quintessential English midfielder is a “box to box” type of player. Unfortunately, this mindset can often lead to players over committing forward and leaving gaping holes behind them for the more disciplined teams to expose over and over again. They seem to lack the tactical and positional awareness that their German, Dutch, Spanish and Italian counterparts possess. thinks back to the German team of World Cup 2006, an admittedly limited outfit who almost reached the final by being well organised on top of their obvious attacking qualities. I think of Michael Ballack and Thorsten Frings in midfield, operating a simple system where one would go forward whilst the other would sit deep and cover the space. Their discipline was so impressive that you almost never saw them leave space behind them and one which got the best out of a team that were a shadow of German teams of yesteryear. It is a discipline that is sadly lacking in English players. It is perhaps more exciting to commit all of your players forward and go all out for a goal, but it has been proven time and time again not to be the most effective approach.

The Premiership may be seen to produce some of the most entertaining football from an entertainment perspective (even though this is somewhat self proclaimed as La Liga and the Bundesliga statistically produce more goals per game) but is this focus on “football as entertainment” killing the more technical side of the game (which is needed to grind out championships and win tournaments) at grassroots level and as such producing more and more limited players?

There is no doubting that the Spanish World Cup team of 2010 will not win the style prizes of the 2002 Brazil side, but at the same time, from an entertainment perspective, they are on a different stratosphere to the 2004 Greek team, undoubtedly one of the least entertaining sides to win a major trophy in the history of football. The Dutch teams of 1974 and 1978 were regarded as having played some of the most entertaining football in history, but they never won a major tournament. I know which payoff I’d prefer.

Ultimately we all follow football to be entertained. It is a noble concept and one with its heart in the right place. But the question remains, what price are we paying for placing such a heavy emphasis on playing entertaining football and how much do the players suffer in their developmental stages from this burden? One has to ask whether a new approach to grassroots coaching and learning to appreciate the more “boring” aspects of football would lead to more rounded and complete footballers and more excitement down the line….

6 thoughts on “Are you not entertained?!”