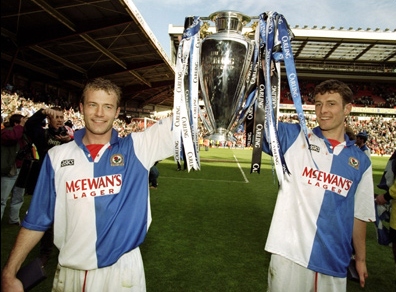 Once upon a time one of the key elements to any successful team was its strike partnership. Throughout the history of the game the majority of the most decorated sides had a forward duo that could unsettle any defence they came up against. Yet in the modern game these partnerships are becoming increasingly rare. The relatively new trend of playing a lone frontman has proliferated the game at all levels and has achieved significant success, notably with Chelsea’s Champions League victory last season.  Spain took this one step further when taking the novel approach of selecting no recognised striker for much of their Euro 2012 campaign. Has the ‘two up top’ tactic gone for good or just been temporarily replaced?

Football is a constantly evolving game where formations and tactics are determined by a manager’s philosophies, player abilities within a squad and formulae needed to impose upon or restrict the opposition. Indeed, the fashion for playing two strikers would once have been considered radical to those used to wing-backs, half-backs, wingers, inside-rights and lefts, and a centre forward.

The switch to fielding just one out-and-out striker can be attributed to several different factors. The first, and for some managers, the main reason is fear. And the higher up you go in football’s food chain, the greater the fear becomes. You can take a look at any of Europe’s top leagues where the financial rewards are at their greatest and you will find that apart from the obvious hopefuls for silverware, the first and main priority is the preservation of top flight status. This promotes the protective mentality and a ‘defend from the front’ attitude.  More men behind the ball equals less space to be exploited and less chance of conceding.

This in turn is leading to an increase in teams basing their approach on counter attacking football. Suck the opposition in and hit them hard and fast on the break and in numbers. To do this successfully you require the right personnel coming from the right areas of the field. This means fast, skilful midfielders running directly at the opposition with pace rather than multiple forwards being tightly marked with their backs to goal inside their own half.

Perhaps this move towards the counter attacking game explains the plethora of the interchangeable attacking midfielders currently being utilised in top level football. Chelsea, Manchester City, Barcelona and Real Madrid are to name just a few who have adopted the method of using just one man in a central striking role to be supported by fleet footed, technically gifted midfield men. Indeed many teams are using players previously known as forwards in deeper lying roles. Think Wayne Rooney.

It is of course entirely plausible that the switch in tactical preference is due to the type of players that are easier to come by rather than finding the players to fit the formation. How many truly great strikers are around these days? The evidence would suggest  this number is outweighed by the abundance of the Iniesta, Silva, Ozil and Mata types. Is it any wonder then that coaches are switching styles to suit the resources they have more readily available?

For those of you who miss the old fashioned forward pairings, do not despair. Football is an ever changing world of opinions. If you wait around long enough, just like anything else, it will come back into fashion. Until then here are some duos from the past who prove that if it ain’t broke don’t fix it.

Deadly in and around the box from open play or set pieces. Magical players

Both great goalscorers but this was a pairing of one man’s brain and vision and the others predatory instincts.

A partnership of mythical proportions. Dominated European competition during its infancy.

Sublime skill from one and frightening pace from the other. Made a good team a great one.

Not so much a partnership as a telepathic connection. A great finisher though Lineker was , Beardsley supplied most of the bullets.

Always seemed to know where the other one was and as such struck up a fruitful partnership that would spearhead a treble winning success.

Worked well enough in tandem to win a Premier League title with plenty of goals between them. So good they even had a nickname-SAS.