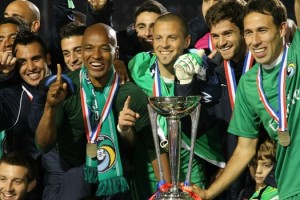 For those who didn’t know, New York Cosmos (who now ply their trade in the NASL) won the Soccer Bowl 1-0 against Atlanta Silverbacks last weekend in their inaugural season. The winner came thanks to a 78th minute strike from ex-Villarreal and Spanish International Marcos Senna.

The championship was the club’s first since its return to professional football after being dissolved back in 1985 in the previous NASL. It felt like old times as well with bottles of champagne to be found all around the dressing room, the Cosmos are stamping their authority – a fantastic start for the revived franchise.

On the same evening (November 9th) a report from Goal USA surfaced stating that MLS were looking to re-allocate one of the CONCACAF Champions league spots from the US Open Cup winner and allow the spot to instead be given to the runners-up of the Supporter’s Shield in time for the 2014-2015 season. It would hardly be a surprising move if MLS were looking to do so considering the Open Cup winners this year was D.C. United, who came rock bottom of the Supporter’s Shield race with 16 points, 10 points off Chivas USA in 18th. The format change would undoubtedly symbolise preferential treatment to those who succeed in the MLS regular-season rather than be rewarded with continental competition for going on a good cup run.

There is a major downside for implementing such a change though. The historic U.S. Open Cup, which has been in existence well beyond any major Soccer league in North America, would not only become virtually redundant, but the removal of the CONCACAF Champions League spot would prevent any possible opportunity for clubs in the lower tiers of the soccer pyramid to be able to participate in continental competition – further strengthening MLS’s hegemony in US Soccer while possibly pushing the thriving NASL/USL scene back into relative obscurity.

The New York Cosmos have only played three months of competitive soccer and have already secured their first championship. The ownership group of the Cosmos have not been shy in stating their large ambitions of becoming one of the greatest sides in US Soccer, whether that be as a franchise in MLS or not. Cosmos captain Marcos Senna is an MLS worthy talent, even at the age of 37, alongside a number of other players such as fellow Spaniard Ayoze and Venezuelan forward Diomar Diaz to name just a few who could easily slot into any Major League Soccer team.  Under the tutelage of Giovanni Saverese, the Cosmos look to become a dominant team in the NASL for many years to come. 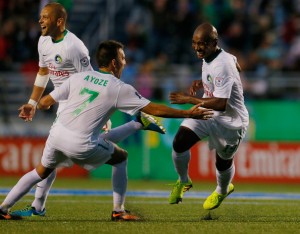 It isn’t just on the pitch where the Cosmos have shown tangible signs of progressing. The NY based side have attract an average of 6,859 fans per home game which isn’t too bad considering their brief existence (already a comparable statistic to Chivas USA) while a large contingent of fans were seen at the Soccer Bowl with a vast majority storming the pitch in celebration after the match. There are definite signs of an evolving, passionate fan-base, but also have opened themselves up to further exposure with agreements  of a major sponsorship deal with Emirates Airlines and, impressively/very significantly, a national television sports deal with broadcaster One World Sports.

The Cosmos are also seeking permission for a new 25,000 all-seater stadium as part of a privately financed $400 million entertainment complex known as Elmont Town Crossings – the kind of stadium that some MLS teams could only dream of (D.C/New England fans would understand).  New York Cosmos are looking to be one of the best in the U.S and it’s looking good so far.

So what does the rise of the New York Cosmos have to do with the reallocation of a CONCACAF Champions League spot? Quite a lot. If the Cosmos continued their ascendency and kept winning titles, enticing high quality  players and bringing in more fans then who is to say that one day they could not be capable of winning a U.S. Open Cup? Particularly when looking at the MLS club’s second string line-ups which are commonplace in the competition. Removing the CONCACAF Champions league spot could potentially deprive the Cosmos for ever playing in continental competition which would undoubtedly have a negative impact on the ambitious NASL as well, who are fully known to not want to be seen as a feeder league to MLS but a genuine competitor.

There are no financial restrictions in the NASL, no salary cap which was one of the reasons for why the Cosmos were able to build such a strong team so quickly, nor is there a limit on international players NY Cosmos or any other NASL side are allowed to have. This has perhaps rattled the cage in MLS HQ (which ironically is in New York) who feels their position as the number one US professional Soccer league is being threatened. Imagine the face on MLS commissioner Don Garber if one day the Cosmos beat an MLS side in the CONCACAF Champions League final – or worse – if they won a Club World Cup. Furthermore, the potentially game changing announcement of a new NYCFC team to play in MLS in 2015 could have perhaps been an attempt by Garber and co. to detract interest from the Cosmos and for fans to look towards either the Red Bulls or the new franchise. The moves made by the management at Major League Soccer could have a detrimental effect on US Soccer as a whole but mostly on themselves.

Of course there is the fact that we don’t truly know if Major League Soccer is looking for the U.S. Open Cup to be stripped of its Champions League place. The decision would ultimately have to be made by the USSF who at the weekend shot down the rumours – but who really knows what is happening behind closed doors? Nevertheless, the Cosmos are clear in their long term intentions to become the best soccer team in USA, if MLS were to be able to get the space removed then CONCACAF may even allow them in via an alternative route.

The MLS-Cosmos feud may have just begun but certainly has the legs to go on for many years to come, both on and off the pitch.

6 thoughts on “Are MLS trying to kill the Cosmos?”