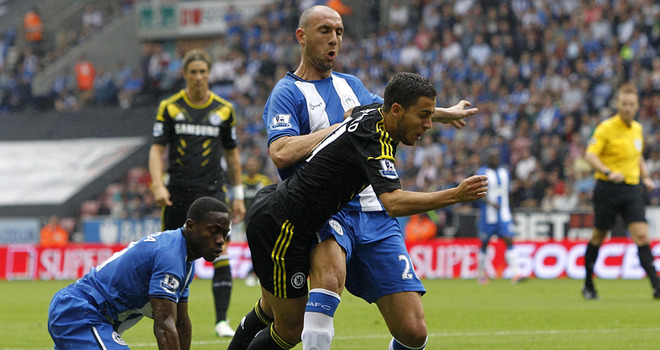 Two early goals from Chelsea proved enough to grab all three points against an impressive Wigan side at the DW Stadium. The game’s opening ten minutes paid witness to a barrage of offensive plays courtesy of the visiting London club, with Eden Hazard playing a part in not only Ivanovic’s second minute opener, but also Lampard’s penalty conversion.

Both clubs put forth full-strength teams for their opening day clashes, but despite both clubs enjoying intensive pre-season preparations, there were a number of very tired faces to be seen quite early on.

Despite Chelsea’s sheer domination in the opening ten minutes of their Premier League campaign, home side Wigan turned the game in impressive fashion. Enjoying the majority of possession for the remainder of the half, the Latics were unfortunate not to hit the back of the net at least once against a Chelsea side who had quite obviously gone to sleep.

Franco Di Santo’s strong first-half performance as potentially given us a glimpse of what’s to come later in the season from the striker. The Argentine played a vital role in the home side’s attacking offering, with the 23-year-old producing a number of superb chances on goal.

Many a Chelsea fan might argue that Wigan’s resilience against their London counterparts could be down to the Latics’ physical presence, which produced some rather heavy tackles during the duration of the game.

New signing Eden Hazard got the worst of the home side’s physicality, with the Frenchman enduring a hefty challenge in the Wigan box to give Chelsea a penalty, which Lampard converted. He also suffered a series of unfortunate and at times reckless tackles and pushes, with the most notable coming just before half-time when he received a full-force slap to the face courtesy of McArthur. Definitely accidental, but the force was definitely there.

Chelsea’s second-half performance showed far more of the football they played in the game’s opening moments. The Londoners did well to keep the ball in Wigan’s half for the majority of the game, although a third-goal to seal the deal for Roberto Di Matteo’s side was nowhere to be seen despite a series of close chances courtesy of Torres, who looks set to have a tremendous season for Chelsea.

If this game is an indicator of what performances both teams will display this season, the two clubs look likely to enjoy comfortable if not hugely successful seasons in England’s top-flight. Wigan are definitely candidates to be fighting for the drop, but based on today’s performance, they will hit form just before the campaign’s close in order to stay up.

Chelsea don’t look dominant enough to retain their Champions League title at present, but a push for fourth place and perhaps the FA Cup doesn’t look too far out of their reach. Of course, Torres and Hazard’s performances during their campaign will play a huge part in what success they do enjoy.