June 12th, 2014. Hours before the world’s largest sporting spectacle would unfold, Chelsea confirmed the signing of Cesc Fabregas in what was pretty much, a shock of a transfer. Ex-Arsenal captain, Cesc Fabregas. Frank Lampard neck-grabber Cesc Fabregas. Former player of two clubs that you normally would not expect Jose Mourinho to be associated with – Arsenal and Barcelona.

In many ways though, Fabregas was a perfect signing for Mourinho. He would fill the ‘homegrown’ spot left by Frank Lampard, would provide the creativity that Chelsea seemed to over-rely on Hazard for last season, and could send in set pieces that beat the first man.

He was one of the Premiership’s best midfielders when he departed for his childhood club and at only 27 years of age, came with captaincy experience, around 450 professional appearances for two top clubs and 90 appearances for Spain. It still amazes me how he cost Chelsea only £27 million + add-ons.

However, the one concern that most had was just how he would fit into Jose Mourinho’s plans. While he isn’t the complete anti-thesis of a Mourinho player, Fabregas for the most part of his career, has excelled in a free role, with little defensive strings attached. He started out as a defensive midfielder at 16, but Wenger decided against keeping him there and made him the playmaking focal point of his Arsenal side.

When Cesc Fabregas’ availability was known in the summer of 2014 and Arsenal chose to not exercise their buy-back privilege, Jose Mourinho – of all people – pounced immediately. A simple detail in the fact that he missed his own son’s final match to talk to Fabregas was pivotal in the Spaniard’s decision. It made him feel important, feel like he would be central to Mourinho and his team, fundamental psychology and as he said himself, he had a few options in England before the Chelsea boss came to talk to him. After that discussion, there was only one choice.

So, definitely, Mourinho saw something in this player that wasn’t renowned for his defensive ability or hard-running or tracking opponents. Fabregas was a personal challenge for Mourinho in that he provided in attack exactly what this new Chelsea team, that focused on fluid football, needed. And yet, it would definitely cause a compromise in the defensive solidity of the team to play him in a ‘pivot’ role next to Matic.

Fabregas’ attacking nous has already been analysed a lot of times but his defensive side was still questionable early on in the season. Gary Neville pointed this out, after the 4-2 win over Swansea where Chelsea conceded a cheap goal in the first half due to Fabregas’ lack of tactical discipline. Just a few games into the season, the Spaniard had developed an instantaneous understanding in attack with Hazard and Costa but the same could not be said of his partnership with Nemanja Matic. 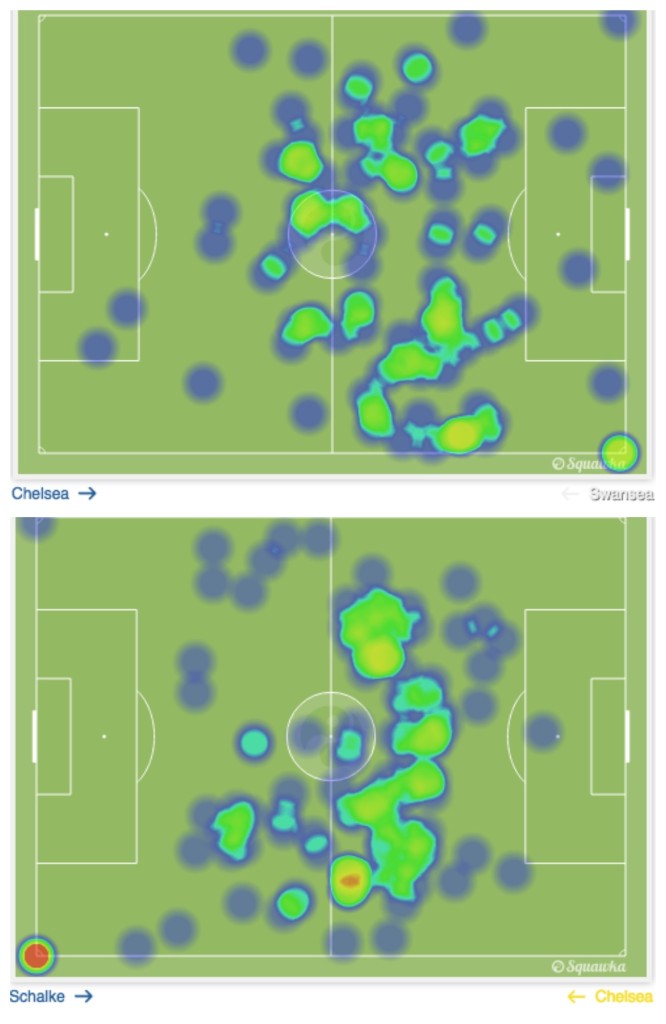 In the first heat map, Fabregas is seen to occupy areas of the pitch that you would expect of a #10 rather than a deep-lying playmaker and this is further supported by the fact that Oscar’s heat map is extremely similar to this.

What this means is there is a paucity in men at the back when Swansea counter and leaves Matic to accomplish far too much on his own. Fabregas took no time to adjust to the Premier League but it was more of his old Arsenal self that we saw initially – free in midfield, pulling strings and creating for fun.

To negate this, Mourinho played Ramires on the right, who would cover for Fabregas when he ventured forward. This was seen as a more stable alternative to banking on Fabregas to improve and transform his play to suit his new role and yet, it is the latter that has unfolded over the last few weeks.

Contrasted to the Swansea graphic, is one from his more recent games and what many consider his best for Chelsea yet – the 5-0 mauling of Schalke. Both may look identical on first glance but pay more attention to the direction of Chelsea’s attack in each map. The second one is a complete reversal of the first. The Chelsea No. 4 bossed the midfield in that game and dictated every part of Chelsea’s proceedings from that deeper position.

The presence of Oscar and the fluidity in interchange between the attacking three means there is space for Fabregas to run into when Chelsea have possession but it is worth noting that he seems to do it less often now and sprays passes into the box and around while he himself stays around and on the edge – waiting to pick up a loose pass and start the tempo again or be in a position to prepare himself for a counter.

Against Sporting Lisbon at home as well as Derby away, Fabregas was played in the No 10 role to give Oscar some rest, ahead of a Mikel-Matic pivot and he exhibited his newfound tactical astuteness very well, pressing high vs Sporting and winning the ball back in key positions and also dropping back to receive the ball from his defence.

Another aspect that has been noticeable in recent games is also Fabregas’ tackling. Especially in the last 4-5 games, Fabregas has shown a real willingness to track runners that go beyond his fullback and attempt to win the ball near the byline and touchline.

Chelsea’s trip to Newcastle was something that piqued interest because it was the first time that Fabregas played in the pivot role without his usual partner-in-crime in Matic. While Mikel is a decent player, he is definitely not as good as the Serb, being a much slower, less technically able alternative who would not offer the same protection Matic would.

Fabregas, however, took up more defensive responsibility on the night. He did misplace more passes v Newcastle than in any other game this season so far, but he also made seven tackles with a success rate of 71% (four tackles won) – much higher than his average of tackles made (5.4) and tackles won (2.8) for this season.

By the game, Fabregas looks increasingly more like a deep-lying play-maker than a central attacking midfielder played out of position. His understanding with the big Serb next to him has improved as has his awareness of not only his own position but those of his opponents in relation to his own teammate’s positions – a crucial attribute to being a midfielder sitting in front of the back 4.

Right from Chelsea’s first league game this season, Fabregas has emphasised that this position is his favorite – where he enjoys his football the most;

At Barcelona, I was playing as a false nine, as a No.10, everything except what I felt was my best position. Where I am playing right now is the position I like the most because I feel I can dictate the play and I feel in control.

He was dictating play very easily even at the beginning but playing in a defensive midfielder position is one thing and playing the same in a Jose Mourinho team is another. Work rate, putting the team above yourself, being positionally aware, committed and focused on pitch are all boxes that the Portuguese expects all his players to check and halfway through the season, Fabregas looks well like he’s ticking most of them.

Though it isn’t quite the story of Bojan Krkic finding his footballing spiritual home in a Mark Hughes-managed Stoke side, a few years back it would have been inconceivable to imagine Cesc Fabregas at the ticking heart of a Jose Mourinho side – and yet, he is currently looking like he is playing some of the best football of his career.

Mourinho convinced him of his importance for Chelsea and perhaps that re-affirmation of his own qualities is all that was needed for Fabregas to regain the confidence and composure he exhibited even in his early 20s at Arsenal. Not only that, but it also seems to have reinvigorated a winning desire and hunger in Fabregas, which has motivated him to become a more complete midfielder, who can dictate proceedings and enjoy his football but also do what he can to help the Chelsea cause when he doesn’t have possession (which is what was expected of Juan Mata last season).

After the League Cup tie at Derby, Fabregas was asked if Chelsea could win the quadruple this season – a suggestion that Mourinho claimed was like the Invincibles hype, something both him and Fabregas had brushed off previously. However, Fabregas this time replied in the affirmative. Though he admitted that only time will tell, he also believed that this Chelsea side have the ‘talent, discipline and courage’ to achieve it.

As January and the Annual Cesc Fabregas Switch Off Period over the last few seasons arrives, admittedly it will be hard for Fabregas to maintain his level of performance, given the absolutely brilliant start he has had so far. In this case, this is something that could apply personally to Fabregas himself; a midfielder whose talent has never been in question but now has developed the discipline – which comes as a surprise to many who followed him at Barcelona – and seems to have the desire and courage to go all the way.