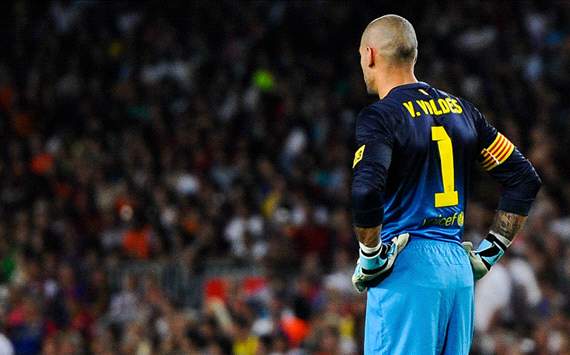 In the end, it was not money or the thirst to win another league or Champions League with a different club.

In an echo of Josep Guardiola’s farewell press conference 13 months ago – which was also attended by Xavi, Andrés Iniesta and Carles Puyol – Victor Valdés outlined the necessity to give Barcelona time to prepare themselves for his departure.

In contrast to the above-mentioned recently announcing that they would end their careers at the Camp Nou, Valdés is not going to stick around.

To some, though, citing pressure as his reasoning for leaving is a curious statement for Valdés to make.

This has been accentuated by the fact that the 31 year old has been Barcelona’s undisputed first-choice goalkeeper for nine years.

In theory, the pressure should have ceded: Valdés has proven himself under five different managers in that time and won every honour in the game.

Therefore, the cynics would suggest it was a desperate disguise for Valdés’ desire to become one of the world’s most well-paid goalkeepers, at Monaco.

However, the speculation about Valdés’ future over the past six months has offered the goalkeeper a rare opportunity to take centre stage and for his legacy and merits to be debated.

Frequently in the shadow of his more marketable Catalan team-mates, Valdés’ talents have rarely been fully appreciated – reflected, even with stiff competition, in a paltry 13 caps for Spain.

Sure, Valdés has won a record five Zamora trophies and has made an unrivalled (for a goalkeeper) 502 appearances for Barcelona but doubts have always dogged him.

After all, despite being part of one of the greatest teams of all-time, Valdés has always been seen, quite unfairly, as a weak link of sorts.

As a result, Valdés has continually had to deal with the misconception that he is a hothead with questionable decision making.

Then, with Barcelona often dominating possession and Valdés seemingly having a passenger role, the Catalan has rarely been rated alongside the likes of Gianluigi Buffon, Petr Čech, Iker Casillas or Manuel Neuer.

However, suggesting Valdés has an easier role than other goalkeepers at top clubs is foolhardy.

After all, an often unheralded centrepoint of Barcelona’s philosophy is their prominent use of a sweeper ‘‘keeper.

It all goes back to Johan Cruyff and the effortlessness of Andoni Zubizarreta from 1988-94.

Of course, there was the obvious reasoning: Zubizarreta gave Barcelona extra yards going forward with an extra attacker.

However, more crucially, defensively, the penalty box became smaller for strikers and Zubizarreta’s courage and daunting stance grew in tandem with his evolving tactical experience.

The benchmark was set by Zubizarreta and, perhaps, it was little surprise that in his wake, Carles Busquets, Vítor Baía, Ruud Hesp and Richard Dutruel all struggled at the Camp Nou.

In fact, Valdés’ initial emergence in 2002 was something of an accident: much of Barcelona’s pre-season preparations were dominated by whether it would be the newly-arrived Robert Enke or Roberto Bonano who would be first choice. 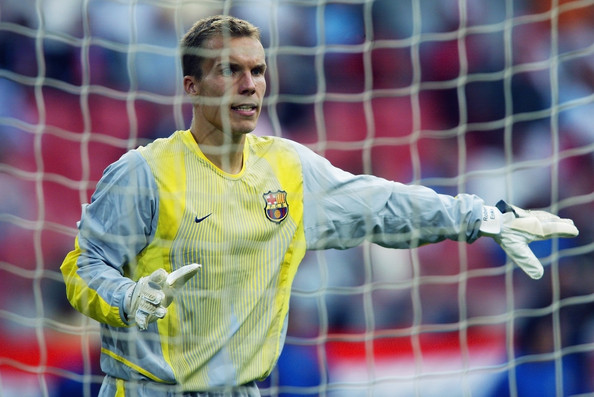 The pressure Enke faced was perfect evidence of the difficult of life as not only a top-level sportsmen, but, also, adapting to the pressures and philosophy of a goalkeeper at Barcelona.

Remarkably, that was without even addressing the asphyxiating swath of nerves Enke experienced on the field in trying to adapt to the role of sweeper ‘keeper.

This is crucial context as mentality, just as much as natural ability, is the key to being a successful goalkeeper at the Camp Nou.

For so long, doubts have dogged Valdés over his temperament yet here was a rookie who rose from third-choice to oust two international goalkeepers.

Admittedly, the argument can be made that this style of goalkeeping is all Valdés has known – having been at Barcelona since the age of 13.

So, while there have been ‘moments’, such as a nervy display in the 1-2 defeat to Liverpool on 21 February, 2007, little of Barcelona’s defensive nougat in recent years can be attributed solely to Valdés.

Perhaps, though, it will only be in the delicate transition in his wake – with the likes of German youngster Marc Andre Ter Stegen touted as a potential successor – that Valdés’ contribution to Barcelona’s golden era will be fully appreciated.

One thought on “An asphyxiating pressure: being Barcelona’s number one”