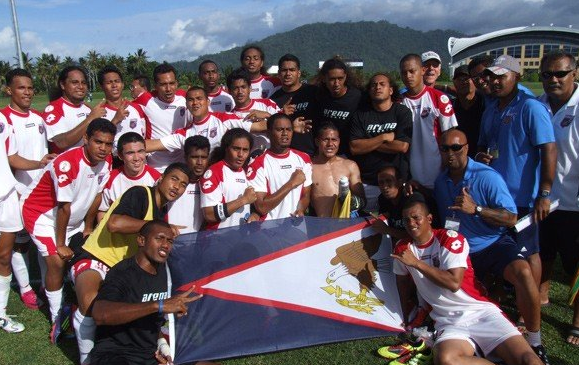 American Samoa, a tiny US territory with a population of just 55,000, recently hit the headlines after winning their first FIFA-sanctioned game. This success, a 2-1 “giantkilling” of fellow minnows Tonga, ended a mammoth 30-game losing streak and brought relative fame (if only for the allocated 15 minutes) to the team and country.

The national side had only previously been acknowledged by worldwide media in 2001 after an infamous 31-0 loss to Australia. Many labelled the side as hopeless and the notion that the
team’s players had never kicked a ball between them was created. However, many also failed to realise that American Samoa, already huge underdogs against Oceania’s largest side, were forced to field their youth team after passport issues with senior players. Just one of their original 20-man squad was eligible for the game – goalkeeper Nicky Salapu – part-time international footballer, part-time Seattle supermarket worker. American Samoa were also forced to field three 15 year olds as many of their under-20 side were unavailable.

Since that loss, American Samoa had seemed to be making little progress, losing routinely and heavily against the likes of Vanuatu, Papua New Guinea and Fiji. In a country where American Football appears to be more popular, coupled with a smaller population than most of their opponents, this may not appear to be much of a surprise, but this incredible losing run earned the side a kind of cult following – well as much is as possible for a tiny island in the Pacific. People from across the world marveled at the haplessness of the team and decided to follow their seemingly hopeless plight.

A narrow 4-0 loss to fellow no-hopers Tuvalu, a side coached by former Holland U-21 boss Foppe de Haan, seemed promising and bearable, and the same scoreline against the Solomon Islands was viewed as something of an achievement. A close 2-0 defeat to Guam showed considerable improvement from previous competitions but against regional heavyweights New Caledonia and Vanuatu, Iofi Lalogafuafua’s men went down 8-0, inevitably finishing bottom of their group with no points.

Their overseas “fans” rejoiced in another comically bad tournament for the Samoans, but many of the players had had their last opportunity to experience a win at international level – too old to play in future tournaments, they would be consigned to history as part of a side that became the laughing stock of international football.

What a shock then, when on 23 November 2011, the side managed the unthinkable and defeated Tonga 2-1 to scenes of jubilation and disbelief in Apia, Samoa, where the game was
held. Many of the cult following probably had the opposite reaction – now they needed a new team to mock in pretend support, someone to patronise with fake encouragement.

It was no coincidence that the win came soon after the appointment of former D.C. United, Chivas USA and US U-20 coach Thomas Rongen, who clearly instilled belief and tactics to the
side. After the win, Rongen stated “This is going to be part of soccer history, like the 31-0 against Australia was part of history”. He recognised that the team had come the full circle in media coverage – mocked for their sheer inability to compete in 2001, they were now being praised for an improbable victory against favoured opponents.

While winning in itself seemed distinctly unlike American Samoa, the fact that the second, clinching goal was tellingly scored by Shalom Luani, a 17 year old defender-turned striker, showed that American Samoa has not changed – it has merely evolved. And good for them.

This article first appeared on It’s Round and It’s White.