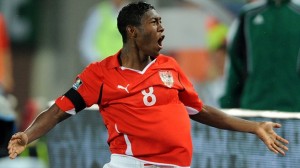 It’s a result which confirmed what was already virtually certain; the Republic of Ireland will not be going to next summer’s World Cup.

On the night, the 1-0 win was no more than Austria deserved. The only goal was scored by the best player on the pitch, the fantastic talent that is David Alaba, some six minutes from time.

When it finally came, it was a goal which was utterly preventable. The charmingly named Christian Fuchs played a ball across the Irish six yard box which Marc Wilson feebly cleared to the completely unmarked Alaba, who took his time, controlling the ball with his first touch before slamming it high and into the roof of the net with his second.

It was a result which was no more than the Austrians deserved. Following a forgettable first half, the home side created the majority of if not all of the chances after the break, made all of the positive play and when the best chance of the night came it was plundered with aplomb.

The visitors needed to beat Austria to maintain any sort of realistic mathematical hope of qualifying. Whilst it’s still not mathematically impossible for Ireland to qualify, it would require a series of miraculous results which simply don’t happen.

At times in the first half, there was flowing football from Ireland and while that obviously couldn’t last under this manager, Ireland did find openings, even if they struggled to create clear chances.

As the game progressed deeper into the second half, Austria started to turn the screw more and more and Ireland were limited to shots from distance as well as a couple of half hearted penalty appeals.

It was a game which was typical of the Trapattoni era  (with the notable exception of France in Paris) as the Irish players retreated en masse more and more as the game went on. The difference between this and the majority of Irish games under Trapattoni was that on the night, a win was absolutely essential for the Boys in Green (or black as it was on the night).

By the 84th minute, the pressure on the visitors was incessant. Having briefly relieved that pressure, Fuchs’ cross was poorly cleared by Wilson only as far as the feet of the one man on the pitch that you would not want the ball to fall to. That man went on to slam the ball high into the Irish net, despite the presence of five Irish players between him and the goal and with it put the Irish team out of its misery.

The defeat was the first away from home of the Trapattoni era (though fixtures at neutral venues – most notably at Euro 2012 – have seen some very poor results under the Italian’s reign). While the result brings down the curtain on Irish hopes for the 2014 World Cup, it will also surely bring down the curtain on the managerial career of a man who used to be seen as one of the best managers in the world.