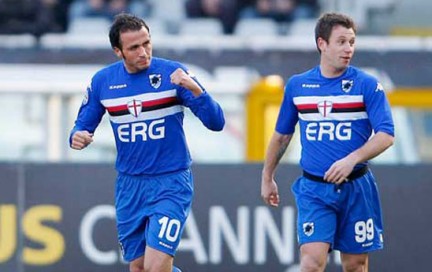 It was a sublime finish. A typically audacious flick of the heel from Antonio Cassano and it looked like the dream was alive. UC Sampdoria would make their return to Europe’s elite after an almost twenty year absence. Not since the days of Roberto Mancini and Luca Vialli had the Blucerchiati soared so high, their 1991 Scudetto win every inch as shocking as the fourth place finish achieved under Gigi Delneri in 2009-10.

With Giampaolo Pazzini and Antonio Cassano it seemed another ‘i gemelli del gol’ had arrived at Genoa’s Marassi stadium. The goal twins, with 32 strikes between them, had first fired ‘Doria into the Champions League qualifiers and now, with four goals between them in the tie, it appeared they would overcome Werder Bremen to reach the Group Stage proper.

Then Markus Rosenberg and Claudio Pizarro struck, Sampdoria were out, stunned in disbelief at having come so close to realising their lofty goal. Dropping down into the Europa League never held the same prestige and they would win just one game despite a particularly weak group containing PSV Eindhoven, Metalist Kharkiv and Debrecen. New coach Mimmo Di Carlo failed to replicate the results of his predecessor and the side would stagnate heavily, struggling for results and unable to defend as resolutely as they did the previous season in spite of a largely unchanged squad.

As bad as it seemed, the worst was yet to come. In mid-October it was announced the talismanic Cassano had been excluded from the first team squad with immediate effect. Eventually, following much speculation, it was revealed the ban was a direct result of a heated row with club chairman Riccardo Garrone after the player refused to attend an award ceremony at a Genoa hotel.

Sampdoria formally applied for a contract termination to Serie A’s arbitration panel and despite Cassano’s apology to the club and his teammates – during which he offered to drink the owners oil as punishment – Garrone steadfastly refused to alter his position, calling it ‘a matter of principal.’ Two months later, on December 16, the league arbitration panel ordered ‘Doria to allow FantAntonio back into the first team and rejecting the plea for a complete rescinding of his deal. The ruling did however conclude the player should only be paid half his salary for the remainder of his contract.

Just a few days later it was reported that Milan had agreed a plan to pay €5 million to Real Madrid – a clause in the deal Sampdoria signed when capturing the Bari native from the Spanish club. This agreement involved ‘Doria and Milan paying €2.5 million each to Real Madrid and Cassano signed with the Rossoneri, meaning not only had they lost their best player in years but that, thanks to Garrone’s ‘principles’ they had actually paid for him to leave.

To compound this terrible error of judgment Sampdoria would then sell Pazzini to Inter for just €13m and French winger Jonathan Biabiany. While bringing in funds to rebuild in the aftermath of losing Cassano was essential allowing the man whose goals had been keeping the side afloat – with no time to spend the fee – was tantamount to Calcio suicide.

The statistics since losing the two Azzurri stars make frightening reading: in the eleven league games since their departure the side have managed just five goals, and they came in two games – one of which they still lost – while conceding a total of 16 themselves. Sampdoria have earned just five points in that time and sit perilously close to the relegation zone in 16th place and only two points separating them from the bottom three.

One move that seemed to be an intelligent solution was the loan acquisition of Manchester United striker Federico Macheda, known to be keen to return to Italy after falling behind a number of players in his search for first team football at Old Trafford. His spell in Genoa began well, a goal on his first start and it seemed Sampdoria had an answer.

Then Di Carlo relegated him inexplicably to the bench, choosing to start Massimo Maccarone and Nicola Pozzi over him, with the former Lazio youngster reduced to coming of the bench for brief cameo appearances much as he did in the Premier League. This has only intensified under new coach Alberto Cavasin who selects Kiko even less frequently.

With stand-out performer Reto Ziegler refusing to sign a new contract – and actively seeking a free-agent move elsewhere this summer – it seems the exodus of quality is set to continue. Sir Alex Ferguson loans his players to coach’s he respects rather than clubs, so it seems unlikely Macheda will remain, and numerous clubs are known to also be interested in 1989 born Andrea Poli. The midfielder has featured far more often last season when Delneri placed much faith in the Italy Under-21 regular as his meager ten starts this term – compared to 26 last year – clearly show.

In an already desperate situation even the fixture list seems to have conspired against the Blucerchiati, with away games at both Milan and Roma, a home tie against Palermo and the second Genoa derby to come in their remaining seven games. Yet this Sampdoria, unlike the one that lost two European Finals to Barcelona, need not look too far for the source of its troubles. If it is true that pride comes before a fall then Riccardo Garrone’s status as the President of a Serie B club would be wholly self-inflicted.

One thought on “Al Volo: Sampdoria Giving A Lesson In Self Harm”