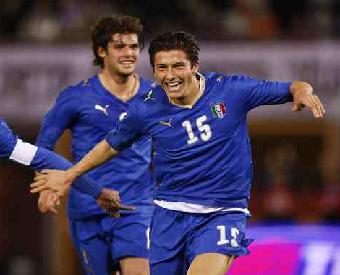 With the loss of a Champions League place being the direct result of an ever-decreasing UEFA co-efficient, Italian teams generally disappointing in continental competitions this season and last summers World Cup debacle, the decline of Serie A has been much discussed and oft-lamented. Along with the knee-jerk reaction to cut the limits on non-EU players, there have been many obituaries penned as Italian football is written off yet again.

However, away from the grandstanding and hyperbole, a number of measures have been put in place that will ensure this is merely a blip and not a fatal slump. The most prominent of these changes has been the replacement of Marcello Lippi with Cesare Prandelli. The World Cup winner has earned the eternal gratitude of his homeland after masterminding that wonderful triumph in Germany but his reluctance to severe ties with the heroes of five years ago cost him dearly.

The new Commissario tecnico was helped in this by a number of post-South Africa retirements from International football and his new broom has swept all but the younger members of that squad from the current set up. The 23 man list for the recent qualifier against Slovenia contained just nine hold-overs from Lippi’s last squad and only Gigi Buffon and Alberto Gilardino from the victorious 2006 group.

A much needed injection of youth has followed, unsurprising given Prandelli’s history of embracing emerging talent and seeing names like Andrea Ranocchia, Davide Santon and Giuseppe Rossi as regulars is both reassurring and pleasing to many. Perhaps the biggest advantage of this has been the changes it has allowed in the style of play, with a far more modern and possession orientated being implemented.

The midfield trio against Slovenia contained three men supremely comfortable on the ball, which led to seeing a far greater amount of quality passing on display as Thiago Motta, Riccardo Montolivo and Alberto Aquilani all contributed well while also covering the defence intelligently. Their combined effort may well make it difficult for Roma’s Daniele De Rossi to find space in a starting line-up which until recently he was assured.

With Mario Balotelli and Leonardo Bonucci also part of a squad in which Buffon and Lazio’s Stefano Mauri are the only players over 30, the Azzurri are well placed in building towards the next two International tournaments. Yet this is not the end of the changes as finally the FIGC have seemingly sat up and taken notice of what other nations are doing and this can only be of long term benefit.

Appointing Roberto Baggio, Arrigo Sacchi and Demetrio Albertini to key positions has seen a proposal for an Italian youth team – aged from 19 to 21 – to enter the league system in either Serie B or the Lega Pro (the second and third tiers respectively) in order to gain first team experience. While the lack of transfer fees and modest wages this would entail seem at first a great concept, a closer examination of certain aspects cast serious doubt on the merits of it.

What effort would go into representing a team to which a player would have little affiliation or indeed one which has no prospect of relegation or promotion? In addition a second look at the age limits leaves the same issues as now – a player is deemed a youngster until at least 21 on the peninsula, a fact which while being more difficult to change is perhaps the real issue.

Italy’s Settore Giovanile set up allows many players to still be considered members of the youth teams long after their 22nd birthdays, with most having little – if indeed any – first team experience by the time they are promoted to the full squad. This was reflected at the last World Cup where only two players had made fifty appearances in the top flight prior to turning 21, a sad indictment of the suspicion with which young players are still regarded.

This is the problem the FIGC must surely address first and simply lowering the upper age limit on the youth sectors would be a huge step in the right direction. The easiest way would be to abolish the Primavera age group and leave the Under 19 ‘Berretti’ as the final stepping stone in a players development. This suggestion was also included in the recent proposal made public by Albertini and carries a far greater significance for the future than the ‘Club Italia’ idea.

Choosing to focus on emerging talent is an important step, ensuring everyone defines ‘youth’ in the same terms even more vital.

One thought on “Al Volo: No Longer A Country For Old Men?”