Bayern Munchen and Internazionale both wrapped up their domestic league and cup doubles this past weekend in what has undoubtedly been a season of such triumphs across Europe. The winner of this game can therefore replicate Barcelona’s achievement of last season and complete an amazing treble. 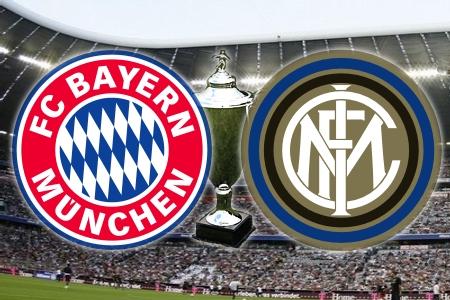 Make mine a treble

But you would be forgiven for thinking this match-up was not about two teams and instead a tale of two managers.

The Dutch Master against his former Portuguese apprentice. Louis Van Gaal vs Jose Mourinho. From 1997 to 2000, Mourinho was the assistant to Van Gaal at Barcelona, and the two have never previously gone head to head.

Both have won the competition before, Van Gaal with Ajax in 1995 & Mourinho in 2004 with Porto. Which ever coach comes out on top here will join Ottmar Hitzfeld and Ernst Happel as winners with two different clubs.

Of course the game still has to be played, and you would have to view Inter as heavy favourites. Munchen have lost more games in reaching the final (four) than any team in the past eight years and take on Inter with perhaps their best player, Franck Ribery suspended following his red card in the first leg of the semi-final.

“If you think you can do better…”

The team relies heavily on the individual brilliance of Van Gaal’s fellow Dutchman Arjen Robben. The winger has been in outstanding form, particularly in Europe where his goals have seen off Fiorentina and Manchester United in earlier rounds.

Supporting Robben is a team which defies the common mis-conception that a strong spine is vital to a successful side. The goalkeeper Hans-Jorg Butt is not very good, the central defenders De Michelis and are OK, but certainly not special. Bastian Schweinsteiger is great in his new role under Van Gaal, but Mark Van Bommel, while experienced is a player the club were looking to sell not so long ago.

Thomas Muller has been a revelation this season, but Bayern have rotated their central strikers (Klose, Gomez and sometimes Olic). Their strength is definitely outside that central spine where full back Phillip Lahm, Robben and Ribery are all exceptional, and it is a huge credit to Van Gaal’s talent that they have reached the final.

In stark contrast Inter are, as you would expect from a Mourinho coached team, almost a machine. Strong at every position, with great depth to the squad, man for man you would struggle to fit a Bayern player into their starting eleven.

They say you should never go back…

Diego Milito, the Argentina forward is unquestionably one of the buys of the season. His goals have led Inter to the position they now find themselves, and he is ably supported by Eto’o – aiming to be the first player to score in three finals – Pandev and Mario Balotelli,

Behind them the midfield is packed with the hardworking players the coach loves. The presence of Cambiasso, Muntari, Zanetti and Stankovic will minimise the effect of Thiago Motta’s suspension.

The defence is equally deep, and arguably even more robust. Maicon’s attacking prowess is always covered by a combination of Lucio, Samuel, Cordoba, Chivu and even Materazzi.

Inter’s counter attacking style is led by Wesley Sneijder, arguably Milito’s only rival in the “best buy” stakes. His vision and creativity, allied with accuracy at dead-ball situations has been the spark behind his side’s new-found excellence on the European stage. Much the same as Robben he is another Dutchman forced out of Madrid by the arrival of the Galactico 2.0 era.

That the final is to be played at the home of their former club, the Santiago Bernabeu, will not be lost on either man as they attempt to inspire their respective new teams to glory. Sometimes a double just isn’t enough…