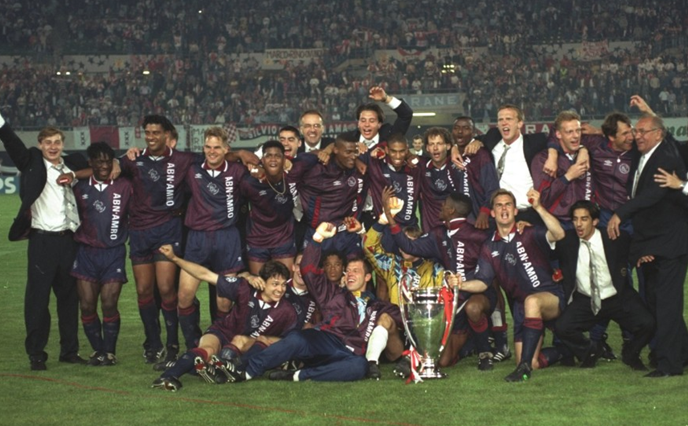 24th May, 1995. Austria. In the stadium named after Austrian football legend, Ernst Happel. An impressive  youthful Ajax side were up against a big gun in Europe, a side that had won the European cup 3 times in 6 years. They faced Fabio Capello’s Invincibles. They faced AC Milan.

The outcome according to many, even before the game, was a no brainer. Milan would brush Ajax aside. Ajax were no match. This Milan side had Franco Baresi, Marcel Desailly, Daniele Massaro, Paolo Maldini, Roberto Donadoni, et al. The same team that had brought Barcelona’s dream team to it’s knees with a devastating 4-0 victory in Athens at the previous year’s final. Ajax were overwhelming underdogs, despite having been UEFA Cup Champions in 1992. Milan had all the quality, the experience and pundit’s endorsement.

But there was some giant killing activity that night. 19 year old substitute Patrick Kluivert came on and delivered the decisive blow. Ajax successfully floored Milan. The young boys had beaten the big boys. Ajax secured it’s fourth European title, their first since the Cruyff years of the early 70s. The victory, poetic as it was, was supposed to be the beginning of Ajax’s awakening from their two decade slumber to reclaim their place at the high altar of European football super powers.

They had a young team, most of whom had come through their famous youth academy. It was Johann Cruyff’s 1987 Cup Winners Cup winning side, that had undergone a smooth transition.This team had won three Eredivises on the trot, a UEFA Cup and a KNVB Cup.

The squad had Edwin Van der Sar, Edgar Davids, Kluivert himself, Nigerians Finidi George and Nwanoko Kanu, the De Boer brothers amongst others. Van Gaal, known to be highly conscientious in his approach, was at the helm. They had all the ingredients to go on to become a force to reckon with in Europe once again. The key was going to be keeping the consistency and momentum going while holding the squad together.

The team went on to annex both the UEFA Super Cup and the Intercontinental Cup. The next season, they showed highly impressive signs of sustaining their success, reaching the European Cup final for a second year running. Their opponents, like that of the previous year, were from Italy – but from another part. Right from Turin, the old lady, Juve, under the tutelage of Marcelo Lippi. This time, Ajax were the favourites, and they had earned it.

After a 1-1 draw, Ajax went on to suffer a penalty shootout heart break. Juventus claimed only their second European Cup. Van Gaal and his young army had to settle for silver medals, and watched on as the like of Del Piero, Deschamps, Conte(yes, thee Antonio Conte), Ferrara and captain Vialli bask in the joy of celebrating with the giant trophy. On their way to the final, Ajax had won almost all of their group games, drawing just one, and scoring 15 goals. They glided past Real Madrid and Nantes in the Quarter final and Semi Final respectively. The signs were good, they were once again a force, and the final loss may have just dealt their conquest a serious blow.

Unfortunately, that final was to be the beginning of a steady decline; a decline similar to one they had after the hatrick of  European Cup wins in 1973. Gaffer Van Gaal left for Barca, followed by a massive exodus of the core of the squad between then and 1999. Seedorf was the first to leave(for Madrid), and that move left the exit door ajar, with the likes of Davids, George, Kanu, Kluivert , Overmars, Van der sar, Litmanen and the  De Boer brothers all following suit, thus reigniting the practice of ‘feeding clubs’. Their resurgence became a false dawn; a nine-day wonder. An inevitable retrogression unfolded – lasting to this day.

Years on, Ajax, despite being occasionally dominant in the Eredivise, are still impotent in Europe. The practice of feeding clubs – their European rivals for that matter – has still not died out. Over the years, the club has become used to being a club that just competes in the European Cup(a tournament they have won 4 times) just to add up to the numbers. Their academy, one of the best in the world, produces players, who come through, shine in the first team, and are subsequently sold, as part of a cycle that undermines their status as a European football super club.

Whilst their peers, AC Milan, Real Madrid, Bayern Munich, Liverpool and co have been regular challengers/winners in the competition over the past decade, Ajax has become worryingly content with being a player producing machine, and local league challengers. They have never really launched a genuine challenge in Europe since 1996. Interestingly, players they have nurtured, and sold, have gone on to win the competition with other clubs – Van Der Sar for Man United, Sneijder with Inter Milan, Seedorf with AC Milan and Real Madrid etc. This weirdly means Ajax, The Netherlands’ biggest club, has become a producer of ‘tools’ for their European rivals to use to get ahead of them, instead of actually using these ‘tools’ to revive an already existing reputation – a reputation that comprises 31 league titles, 18 Cups, and 10 International Titles.

Frank de Boer, a member of Van Gaal’s side, now manages the side. He won the Eredivise title last season, with an exciting side that only lost 4 times, scored 93 goals and clinched the shield with a comfortable 6 point lead over fierce klassieker rivals Feyernoord. They enter Europe this season as Dutch champions, in a champions league group that has Real Madrid, Dortmund and Manchester City, all champions in their domestic leagues. The natural order, one would expect, would have been to keep the squad together, buy quality, and compete seriously both in Europe and at home. But typically, Ajax says No thank you!

As has become an entrenched tradition over the last decade- case in point: Huntelaar, Suarez, Babel, Emmanuelson, Vermaelen, Ibrahimovic, Heitinger, Nigel De Jong, Pienaar, Rommedahl, to mention a few- they sold. Not even selling fringe players, but core players as well. Jan Vertonghen, Gregory Van Der Wiel, Vurnon Anita, as well as Nicholas Lodeiro, all left. The situation of having to rebuild virtually a whole new squad all over again. Familiar disadvantage, season after season.

But Ajax are used to it by now. Yes, they are perhaps – used to mediocrity, used to being the under performing one amongst Europe’s super clubs. Journalists have already written them off in their group. And with a squad that can hardly front a single superstar, rightfully so. Skipper Siem De Jong and Christian Eriksen are probably the only players close to a super star tag, but one can’t help but think they will become the next subjects of the ‘exodus curse’ at the club.

The sort of club de Godenzonen has evolved into is a genuine cause for concern. With the degree of rich history it possesses, it makes the situation even harder to comprehend. Something needs to be done. Ajax needs a revival. The first step at least, would be to make an effort to keep their key players, and break that jinx that has seen them lose their best players all the time; from Cruyff  and Neeskens, to Van Basten , Rijkaard and Bosman down to Dennis Bergkamp.

The mythological Ajax, after whom the club was named, was described as vicious, fearless, strong and powerful. But the club is anything but these attributes in Europe these days. The name does not strike fear into any team in Europe anymore. And this is a club that has won almost all the prestigious competitions in club football. A club that served as the home of the most influential football tactical system to date: Total football. A club that has produced some of the best players and managers in football history.

Rinus Michels, who turned Ajax into world beaters, would not be too proud wherever he is. Ajax is now tagged not only as an ‘ordinary’ club in in European competitions, but as a feeder club as well.

2 thoughts on “Ajax: A European great fading into obscurity”