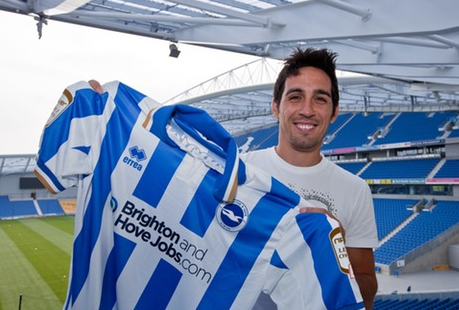 On May 19th 2004 I was in Sweden and managed to get a ticket to the UEFA Cup Final. Valencia were playing Marseille at the Ullevi Stadium, an outstretched Möbius strip in the heart of Gothenburg. Europe’s second final may not have the glamour of the Champions League, but this year it had the talent.

A familiar Marseille team featuring Didier Drogba, Mathieu Flamini and Fabien Barthez had eliminated Liverpool and Newcastle on their route to the final. Valencia arrived in Scandinavia as champions of La Liga. A formidable attacking side managed by Rafael Benítez, ‘Los Che’ included the likes of Pablo Aimar, David Albelda, Rubén Baraja and Santiago Cañizares. But it was the performance of a future Brighton & Hove Albion player that turned the sky orange that night.

During first-half stoppage time, Barthez was sent off for tripping Mista in the penalty area and it was a 22-year-old Vicente Rodríguez who stepped up to score from the spot. ‘El Puñal’ (The Dagger) later assisted the second, finding Mista with a curling through-ball during one of his customary counter attacks down the left wing. Vicente was beaten to the Man of the Match award by Roberto Ayala, but Valencia claimed a historic double and Vicente earned himself a place in the Spain squad for Euro 2004.

Less than 24 hours later, Brighton & Hove Albion were making history of their own. Adam Virgo’s diving header in the final minute of extra-time forced Swindon Town to penalties at the Withdean Stadium during the second leg of the Division Two Play Off semi-final. A victory could hardly be more dramatic. Virgo’s 120th minute goal levelled the tie on aggregate as Brighton lost 2-1 at home, but Richard Carpenter’s deflected winner at the County Ground proved to be vital. The Seagulls won the shootout and made their first trip to the Millennium Stadium to face Bristol City. The final was televised and attended by 65,167 – ten times the capacity of the Withdean. However, the club’s campaign for a new home was building momentum, along with its status in the Football League.

Mark McGhee’s Brighton side took to the Cardiff pitch just two days after Gus Poyet was released from his playing contract at Tottenham Hotspur, thus effectively beginning his managerial career. The Division Two Play Off Final might just have been the first game Poyet tuned in to watch with a newfound coaching ambition. “I can win this league,” he probably said. The future boss would have noticed the many banners in the blue and white corner addressed to the then Deputy Prime Minister John Prescott, with frequent chants of, “We want Falmer,” echoing round the north end. An 84th minute penalty from Leon Knight was Brighton’s only shot on target in their 1-0 win, taking the club up to the second tier and the inaugural ‘Coca-Cola Championship’. Brighton survived the drop by a single point on the final day of the season, but were relegated the following year. Meanwhile, Vicente managed just 15 hours of league football for Valencia’s first team, becoming regularly sidelined with recurring hamstring and groin problems. Even so, a move to the English south coast at this stage was a fantasy. In 2012, it still is.

Following the 2004 UEFA Cup Final, Benítez left for Liverpool, Valencia dropped to 7th the following season and Vicente spent the next seven years battling injury. He attracted interest from Real Madrid with a price tag of €36m, but failed to taste success with club or country again. How the boy from Benicalap arrived in Sussex is proof of his declining reputation. The 30-year-old was released from Valencia after 11 years at the club, and a youthful Gus Poyet took the gamble and offered the Spaniard two things lacking from a faltering career – excitement and optimism. In the past eight years, Albion have experienced promotion, survival, relegation, a lengthy battle for a new stadium and a League One title. A club that has dragged itself back from the embers of extinction would be well equipped to aid the renaissance of an international footballer.

Even when not match fit, his class measures a mile higher than any other Championship star. He is a playmaker gifted with exceptional ball control, a sharp eye for the right pass and an unrelenting will to attack. He won a penalty against Liverpool on his debut and scored on his first start at Ipswich. He is ambidextrous, rarely loses possession and a Brighton move will gain twenty yards with him on the ball. In spite of his sporadic appearances, many Brighton supporters are already praising him as one of the greatest players to ever wear the shirt. How times have changed. Poyet was 36 when he decided to hang up his boots, so Vicente has time on his side. Eight years after the UEFA Cup win, Brighton played Portsmouth at the now-realised Amex Stadium and I watched Vicente come on as a substitute to play his first game for over a month. The perennial crock scored twice and rightfully earned the Man of the Match award. And this time he only needed half an hour.